Following the announcement of its long-term partnership with Marvel Entertainment, Swiss Haute Horlogerie manufacturer Audemars Piguet is delighted to reveal the first iteration of its Marvel heroes watch series, the Royal Oak Concept “Black Panther” Flying Tourbillon, limited to 250 pieces. Inspired by historical character watch designs, the Manufacture wanted to pay tribute to a new generation of inspirational heroes and chose to focus on the powerful Marvel universe. Audemars Piguet has decided to kick off this Marvel series with a Black Panther timepiece in celebration of the family values and seamless blend of traditions and technology embodied by Marvel’s hero. 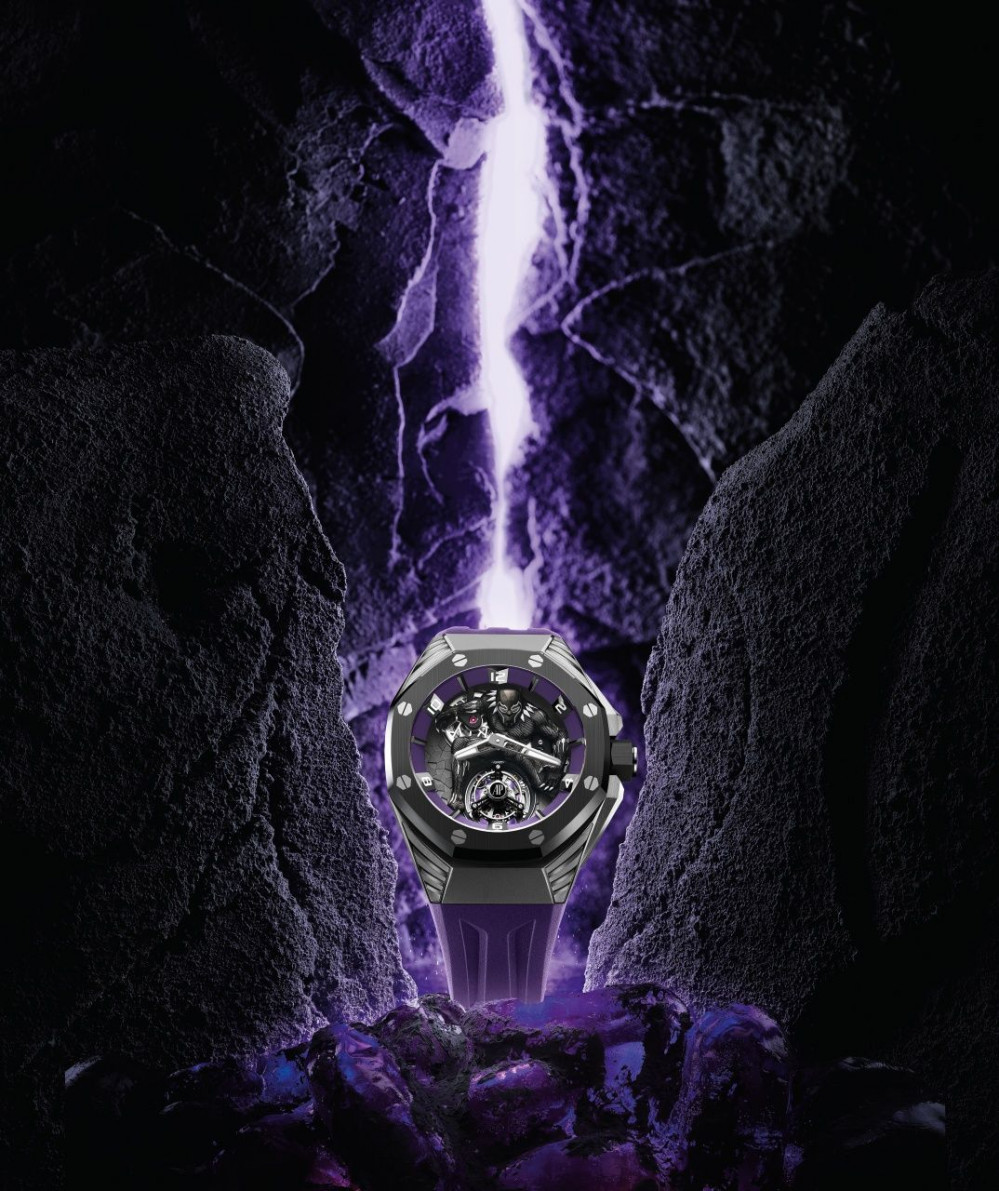 The watch’s futuristic design recalls the cutting-edge suit of Marvel’s Black Panther. Honed from titanium, the rounded case is topped off with a black ceramic octagonal-shaped bezel and crown for a high-tech look. Although unyielding, these light materials nicely complement the case’s ergonomic curvature matching the natural shape of the wrist. The Royal Oak Concept is presented in a 42 mm case diameter.

Rooted in ancestral craftsmanship and futuristic technology, the Royal Oak Concept “Black Panther” Flying Tourbillon brings forward the awe-inspiring creativity of complicated timepieces. This 42 mm piece speaks to Audemars Piguet’s long history of design experimentation and connection to the larger cultural world. Never standing still, the brand has continuously pushed further the limits of its craft and looked beyond Haute Horlogerie for inspiration, notably in the realms of pop culture, art and the entertainment industry. The case’s futuristic look is enhanced by the juxtaposition of titanium and black ceramic as well as by a variety of finishing techniques including satin-brushing, sandblasting and polished chamfers.

The watch’s futuristic design recalls the cutting-edge suit of Marvel’s Black Panther. Honed from titanium, the rounded case is topped off with a black ceramic octagonal-shaped bezel and crown for a high-tech look. Although unyielding, these light materials nicely complement the case’s ergonomic curvature matching the natural shape of the wrist. The Royal Oak Concept is presented in a 42 mm case diameter. 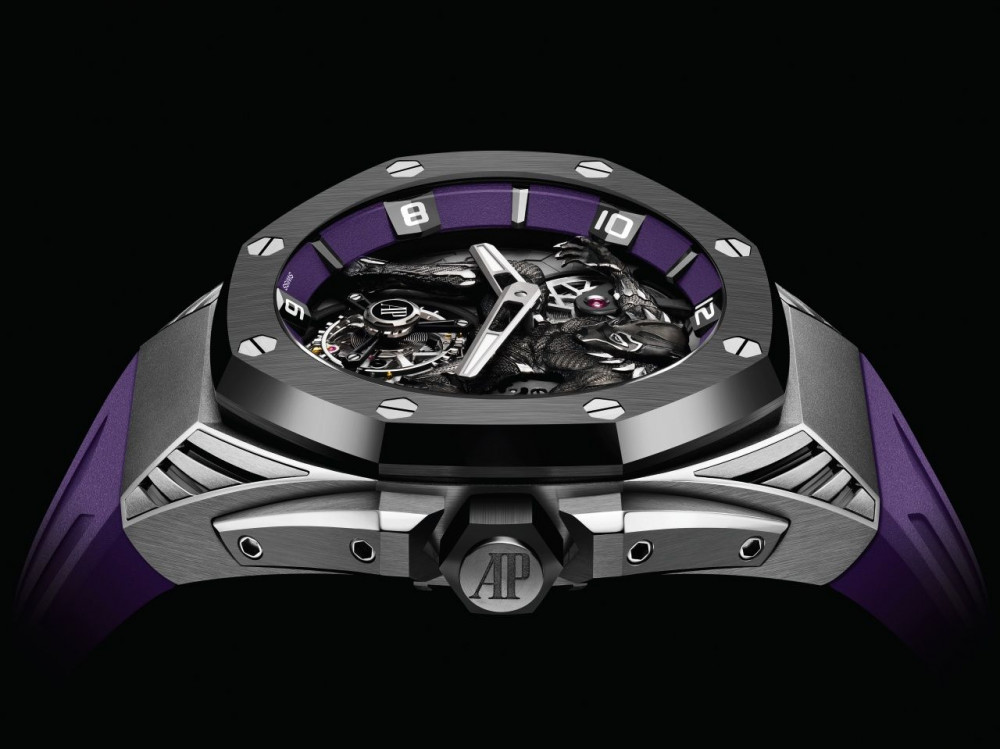 Yet, deeply steeped in traditions, the ultra-resistant case is adorned with refined hand-finishing. The black ceramic bezel has been decorated with the brand’s trademark alternation of satin-brushing and polished chamfers. The titanium case presents a textured look with sandblasted surfaces juxtaposed to satinbrushed and chamfered titanium inserts. The satinbrushed steel hexagonal screws brazenly securing the bezel on the case further the two-tone aesthetics, while the visible purple gasket adds a vivid touch of colour. 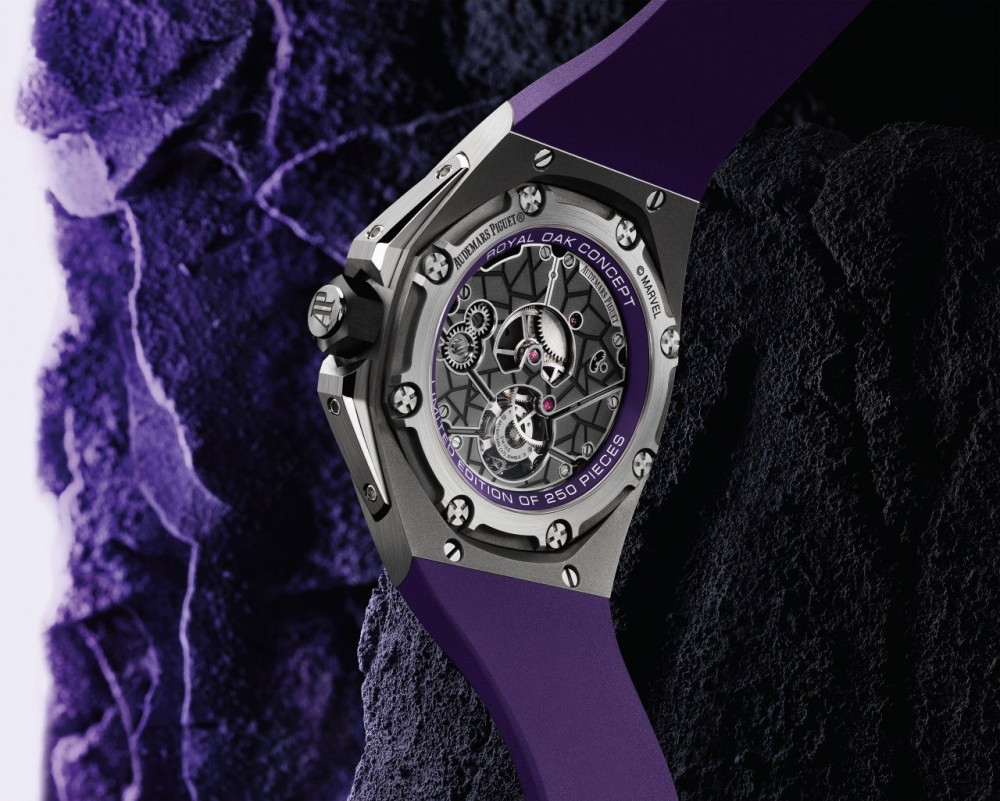 The titanium sapphire caseback, similarly finished with sandblasting and satin-brushing, reveals part of the micro-mechanics ticking within. 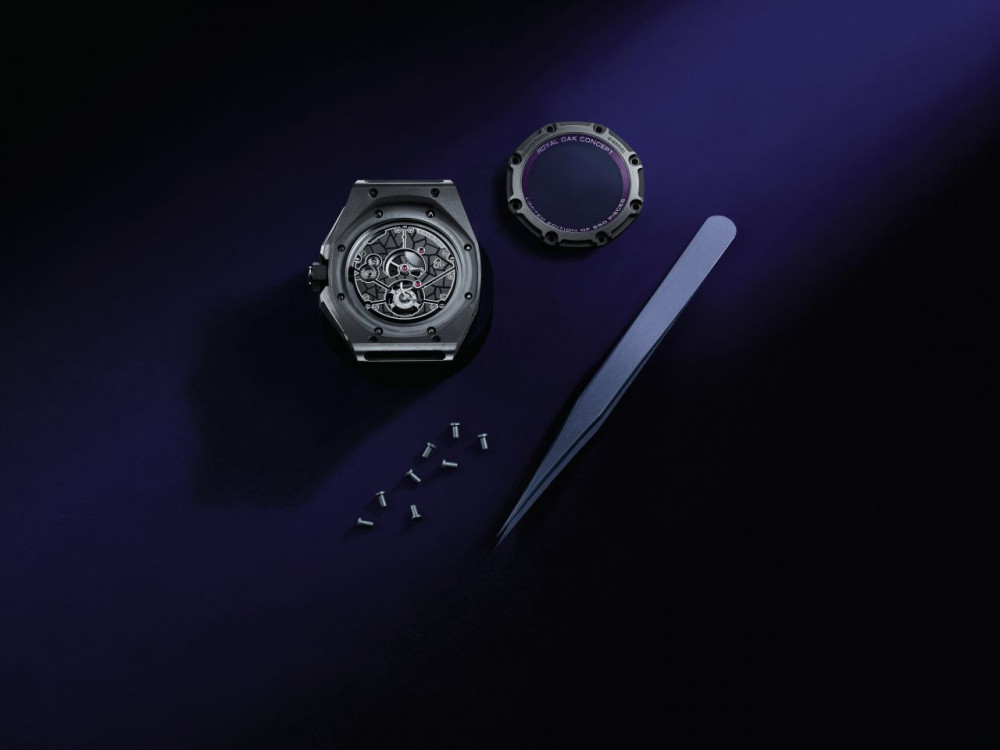 The dial brings together the pulsating flying tourbillon at 6 o’clock with a highly contemporary hand-painted rendition of Marvel’s Black Panther, comprised of white gold. 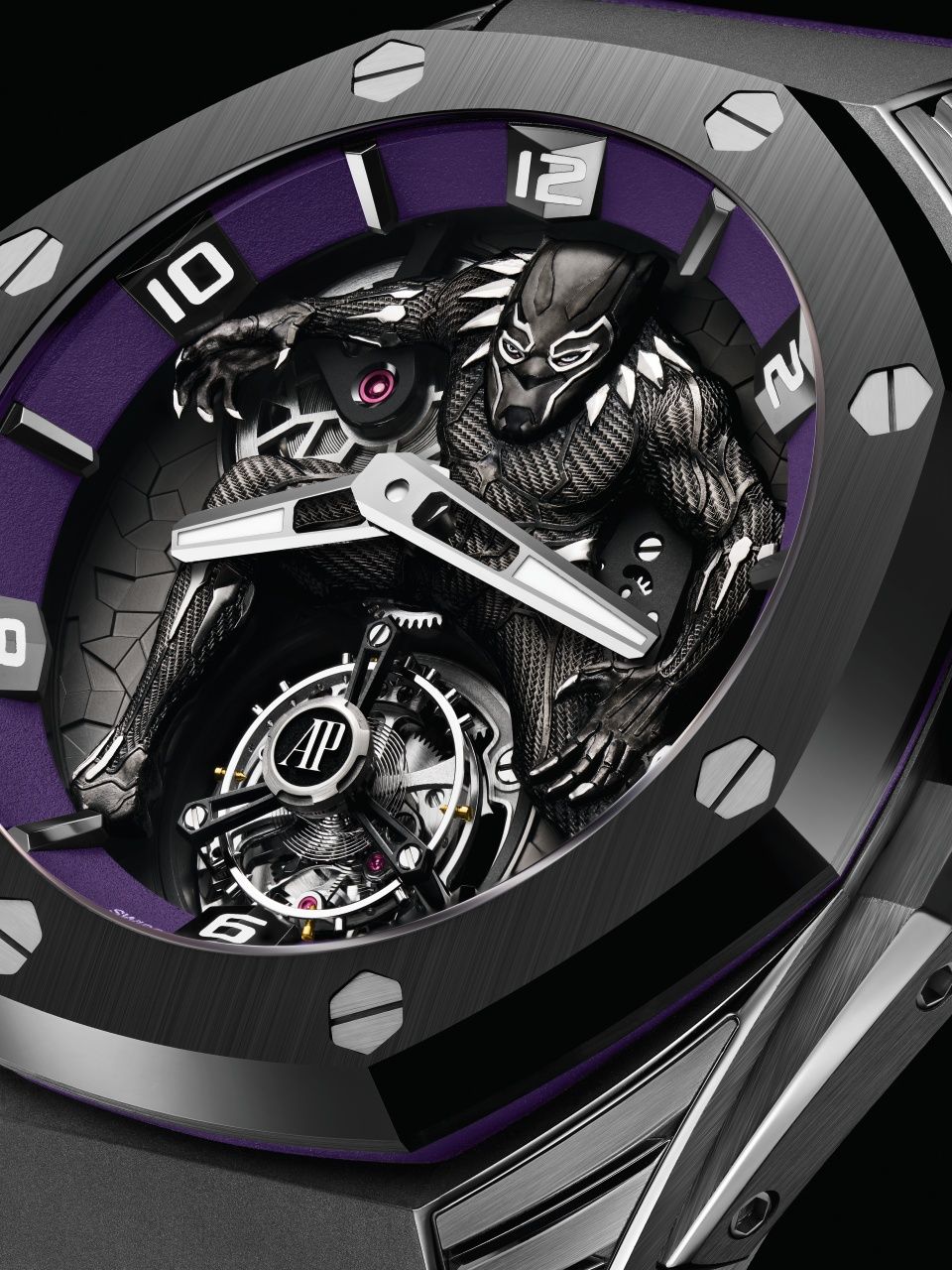 New tools were developed for the realisation, assembly and fitting of the hero on the movement. The silhouette and volume of the character have been preliminarily cut in a white gold disc by CNC machining. Numerous recesses have been created under the character in order to leave enough space for the movement components, while simultaneously keeping enough rigidity to prevent deformation and achieve optimum aesthetics. 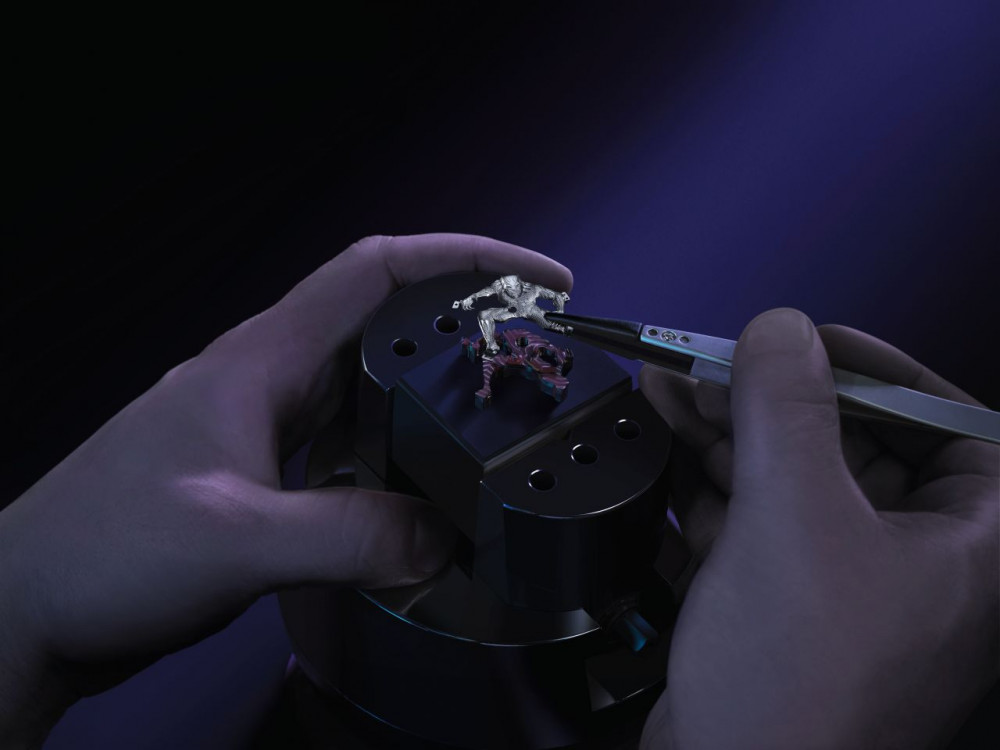 The white gold 3D Black Panther character has been entirely painted by hand. 30 hours of work were necessary to engrave and paint this detailed rendition of the Marvel hero. 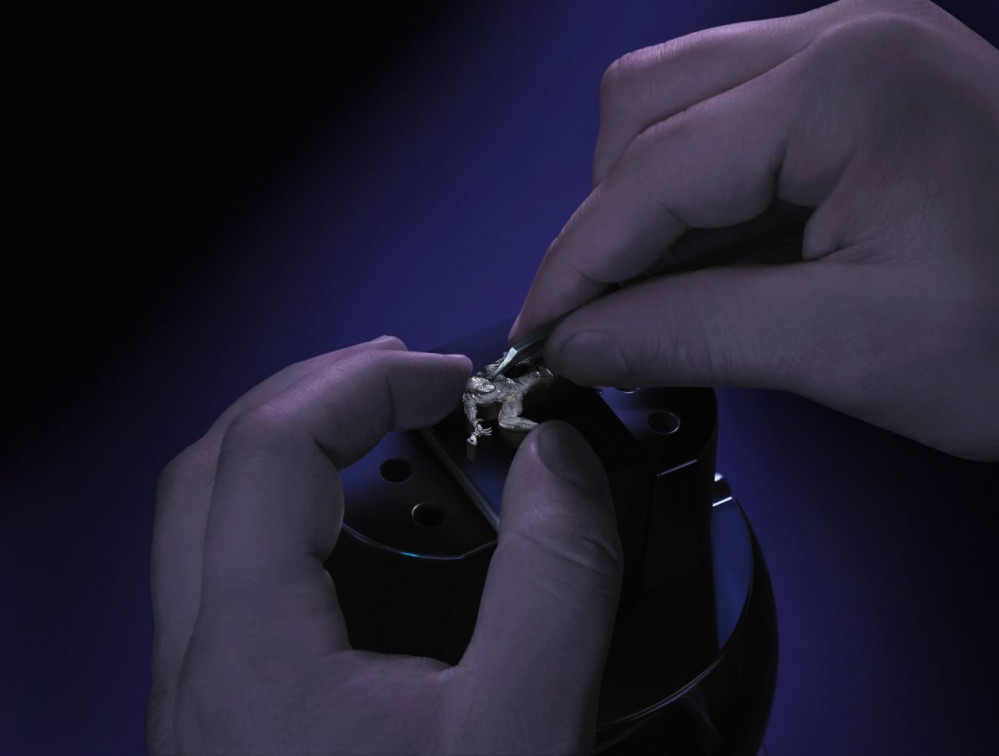 The texture of the dauntless hero’s suit has then been carved out by laser. This stage is complemented by meticulous hand engraving. The myriad of details adorning Black Panther’s body, from his hands and claws, to his muscles and facial features, have been sculpted by hand by a single engraver. 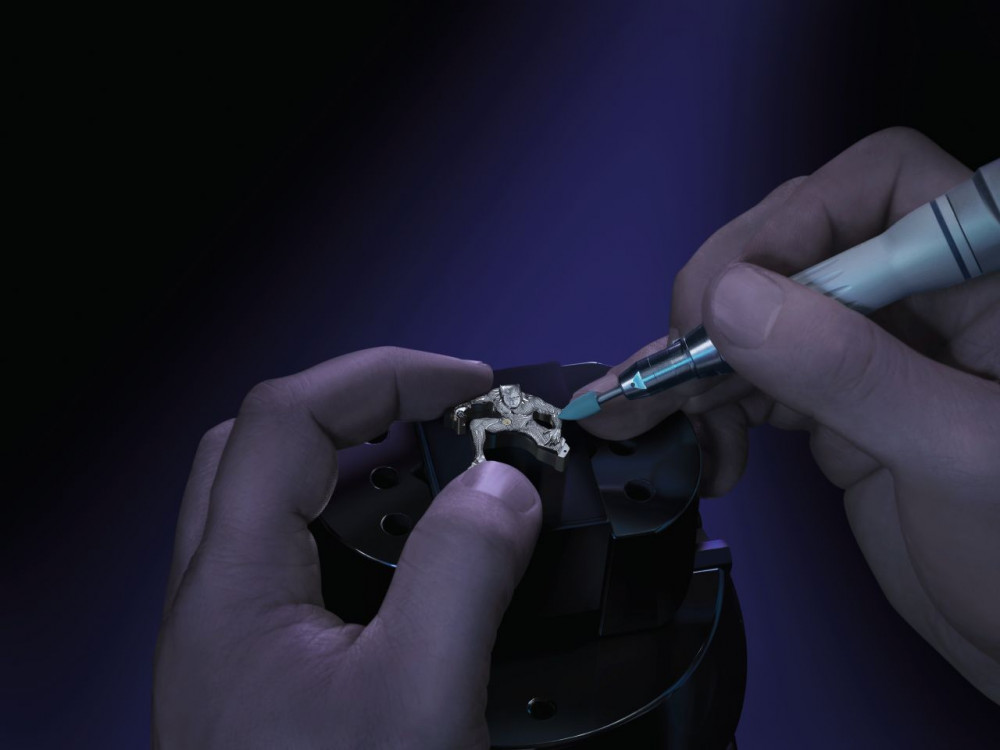 The next steps, performed by a single painter, consist in painting the eyes and applying numerous layers of diluted dark paint on the suit in order to reach the perfect balance of texture and graded contrasts. In addition, small details on Black Panther’s suit have been left unpainted to further the contrast and add depth. These apparent white gold surfaces have been polished to provide a subtle play of light. The resulting alternation of matt and mirror surfaces adorning the character echoes Audemars Piguet’s trademark hand finishing. 30 hours of work in total were necessary for the engraving and painting of Marvel’s Black Panther, while it took a highly specialised team of 4 engravers and 4 painters to decorate the characters of the collection’s 250 pieces. 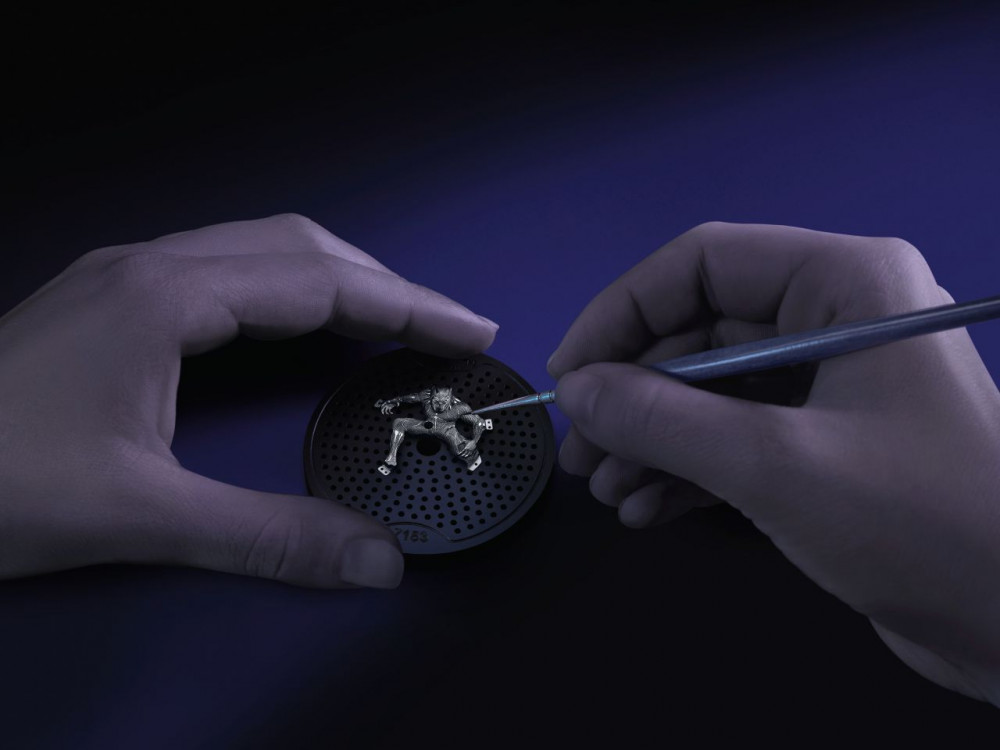 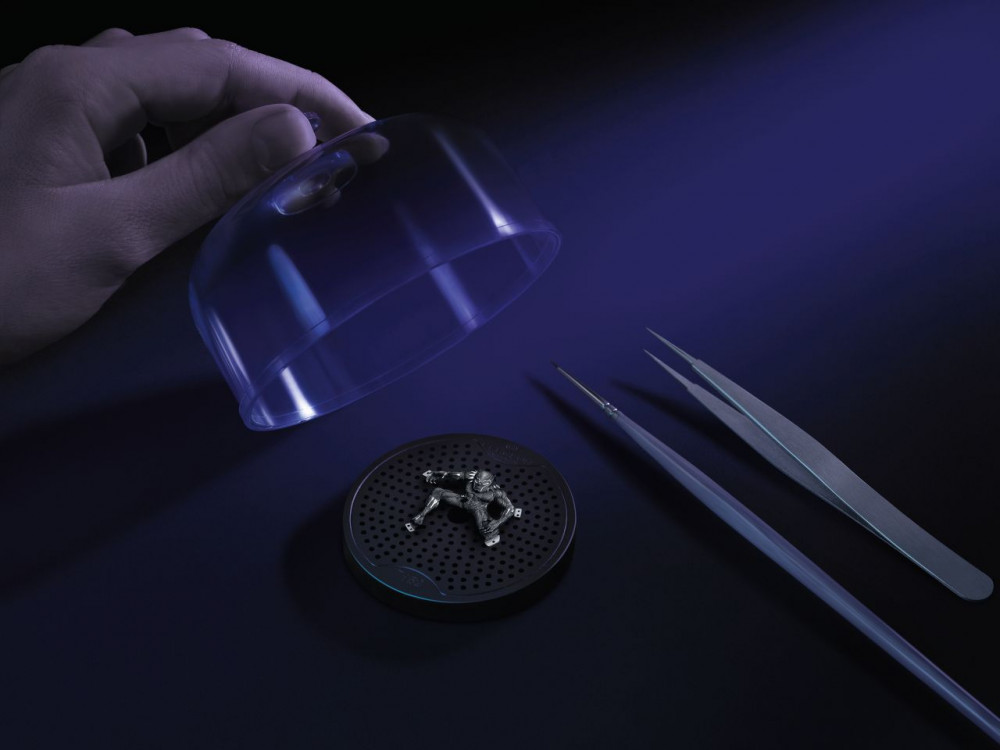 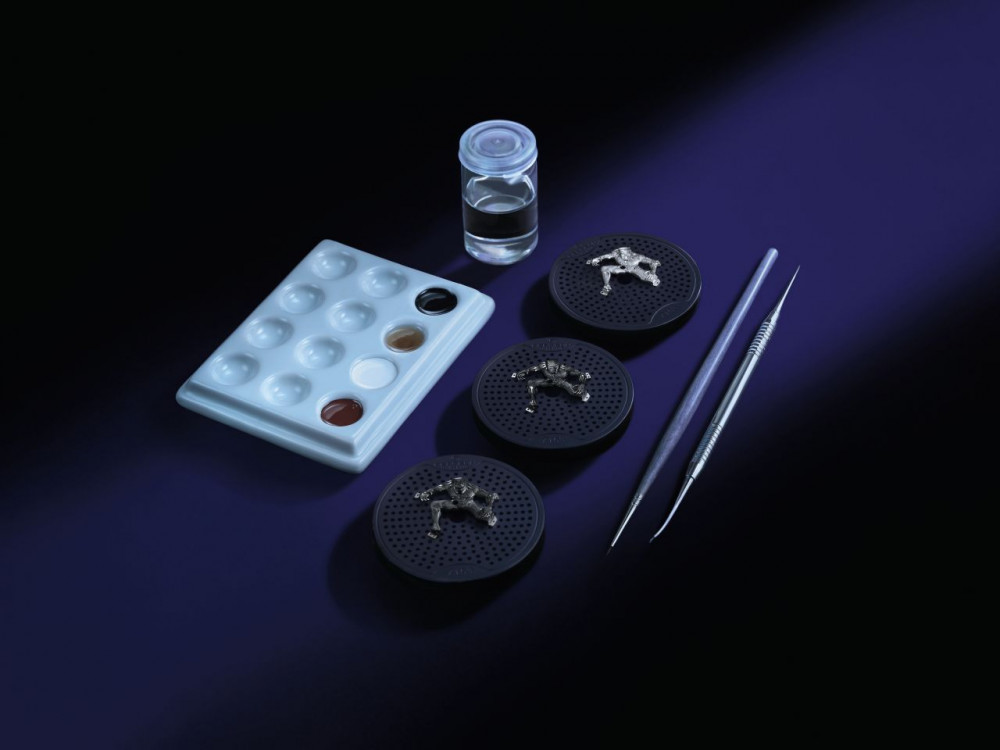 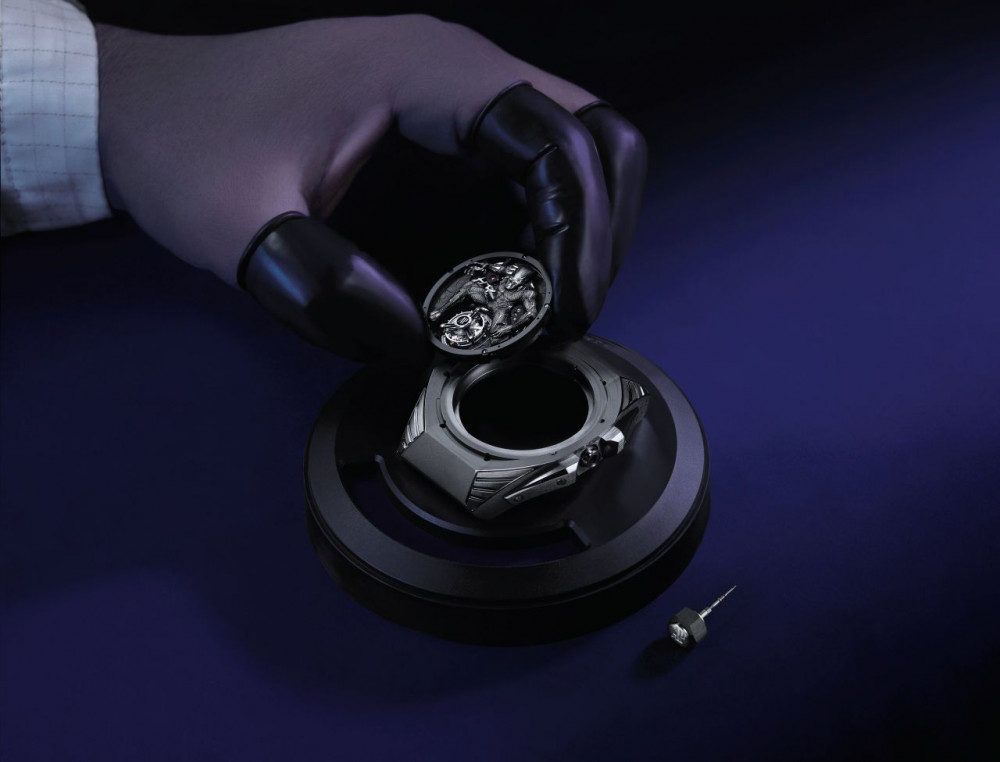 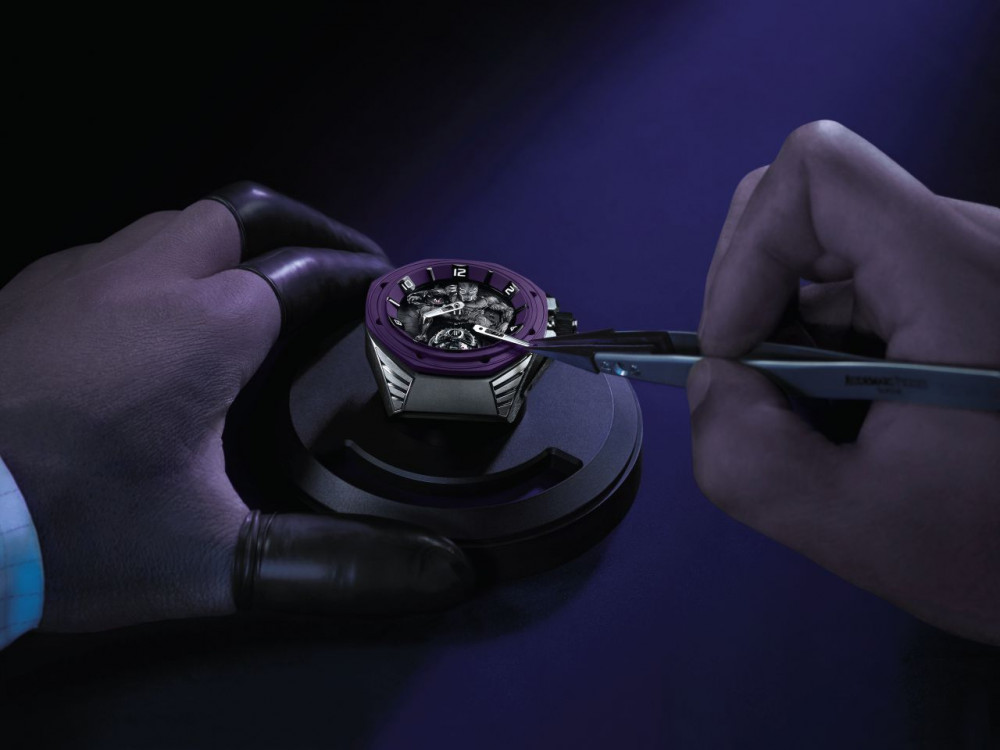 “This collaboration is a dream come true! It is an honour today to pay tribute to Marvel’s heroes and further the strong connection Audemars Piguet has always had with the entertainment industry. This collaborative adventure promises many surprises to come!” François-Henry Bennahmias Chief Executive Officer. 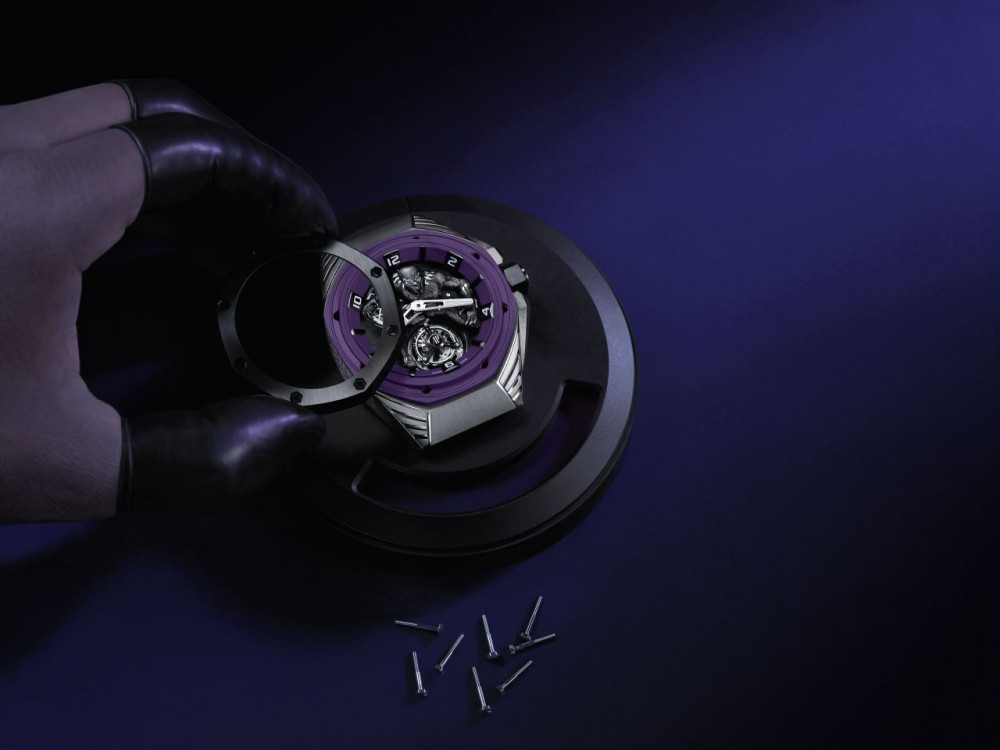 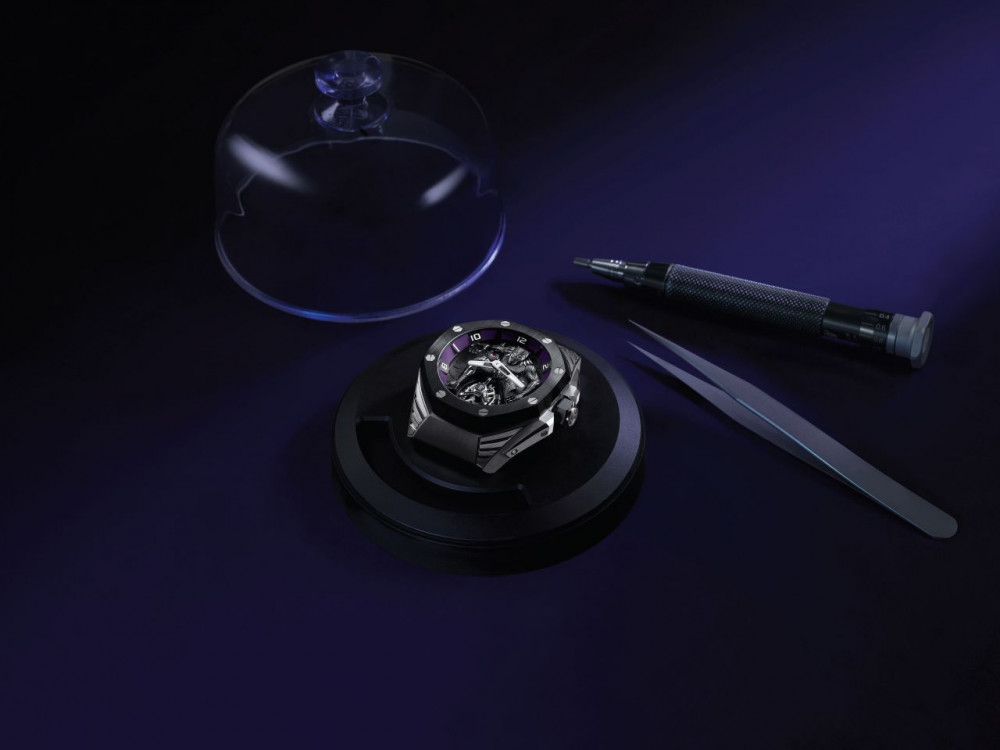 Inspired by the suit of Marvel’s Black Panther, Calibre 2965’s uneven geometric titanium bridges adorned with grey and black PVD coating reveal the flying tourbillon cage at 6 o’clock and the openworked barrel at 10 o’clock, on the dial side. 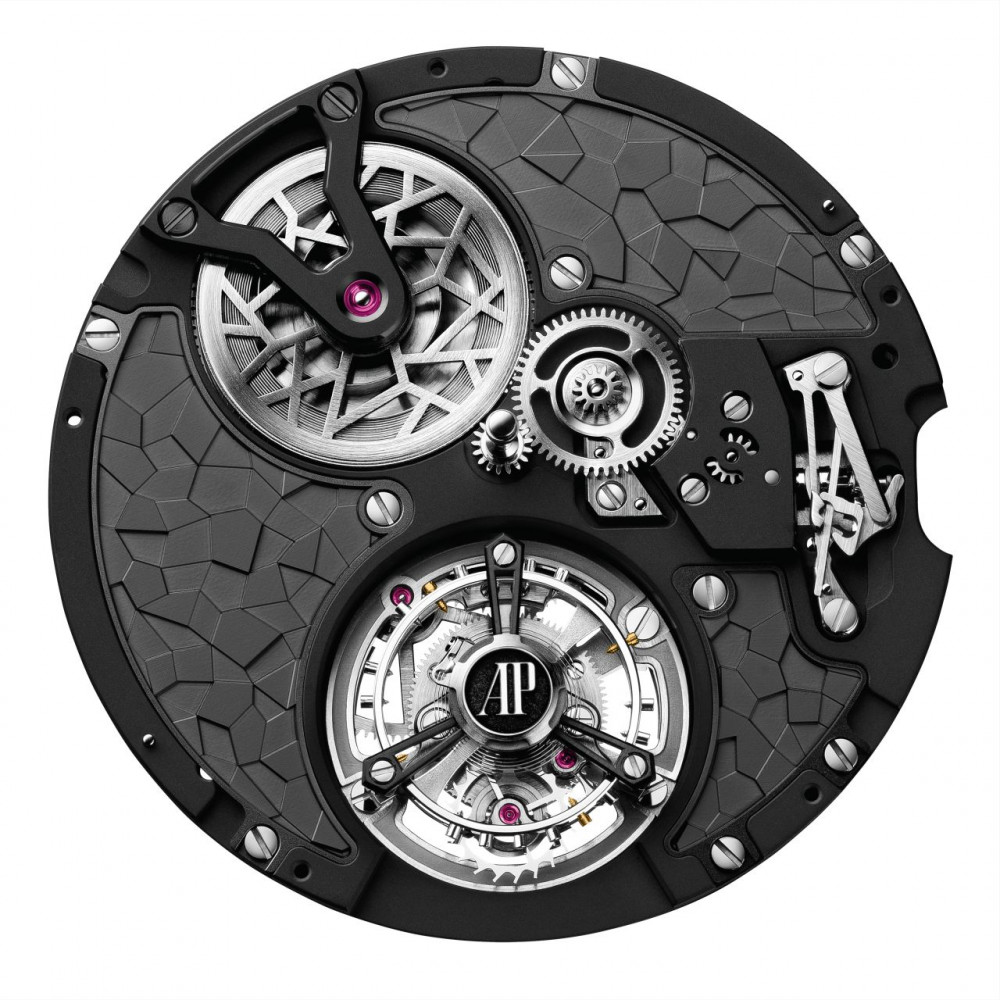 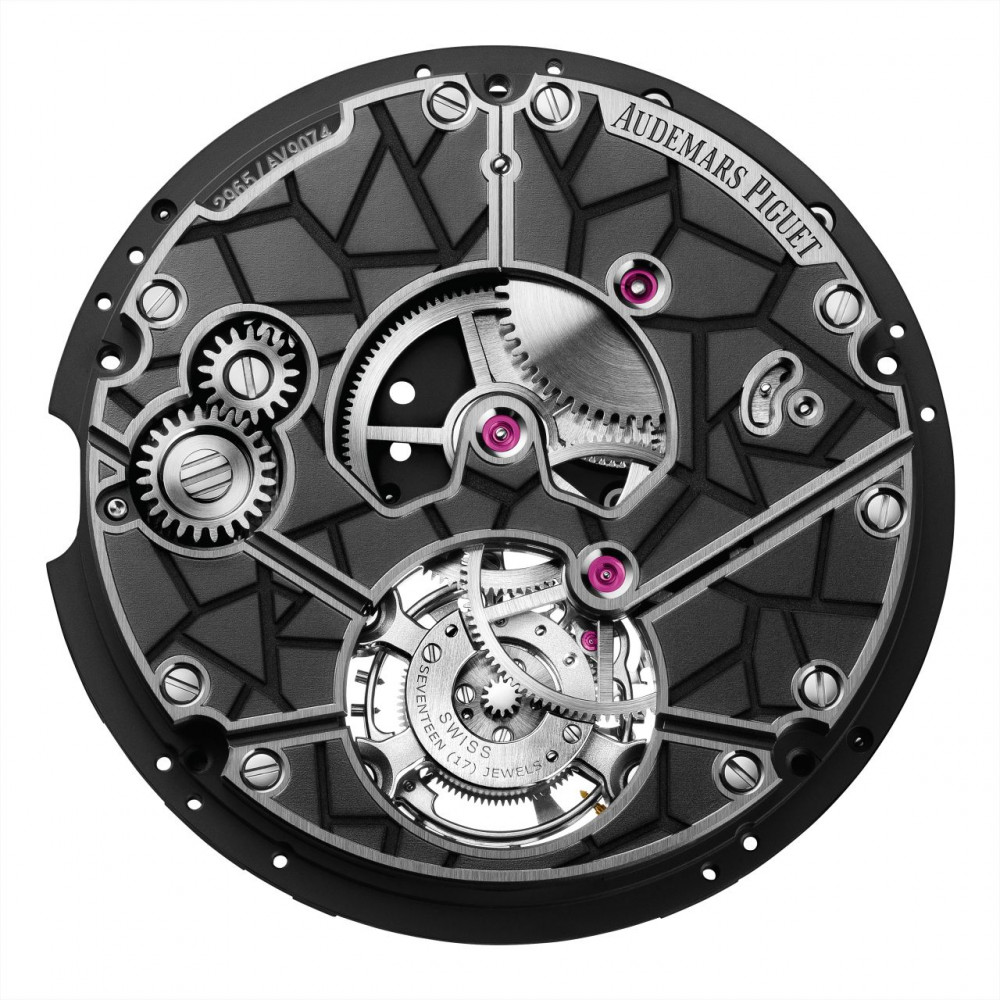 This pioneering watch is powered by Calibre 2965, the latest evolution of the hand-wound mechanism with a flying tourbillon, originally released by Audemars Piguet in 2018 in the Royal Oak Concept collection. The contemporary two-tone design of the tourbillon cage matches with the watch’s overall aesthetics, granting the movement a unique 3D effect. 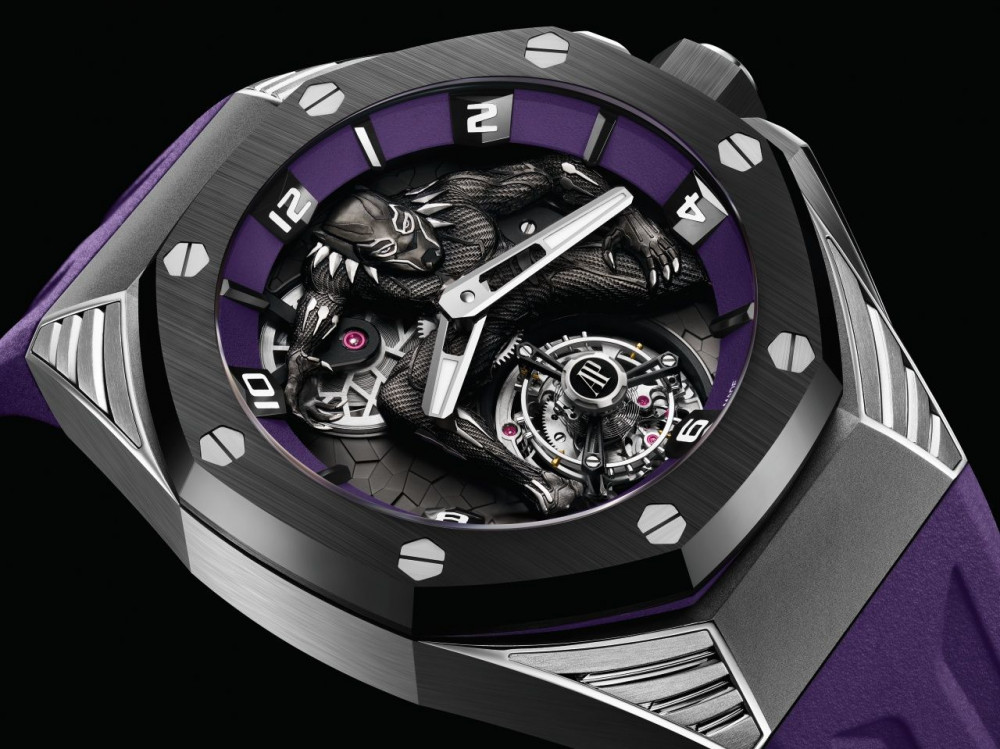 The sapphire caseback provides another window onto the watch’s seamless blend of technological advancement and traditional savoir-faire. The back movement’s sandblasted geometric bridges in titanium adorned with black and grey PVD coating reveal components of the watch’s futuristic beating heart, including the back of the flying tourbillon cage and part of the gear train. The sandblasted purple inner bezel on which is written “Royal Oak Concept Limited Edition of 250 Pieces” offers a powerful juxtaposition. With 72 hours of power reserve and water-resistance to 50 m, this timepiece will also appeal to the adventurous at heart ready to defy gravity with style. 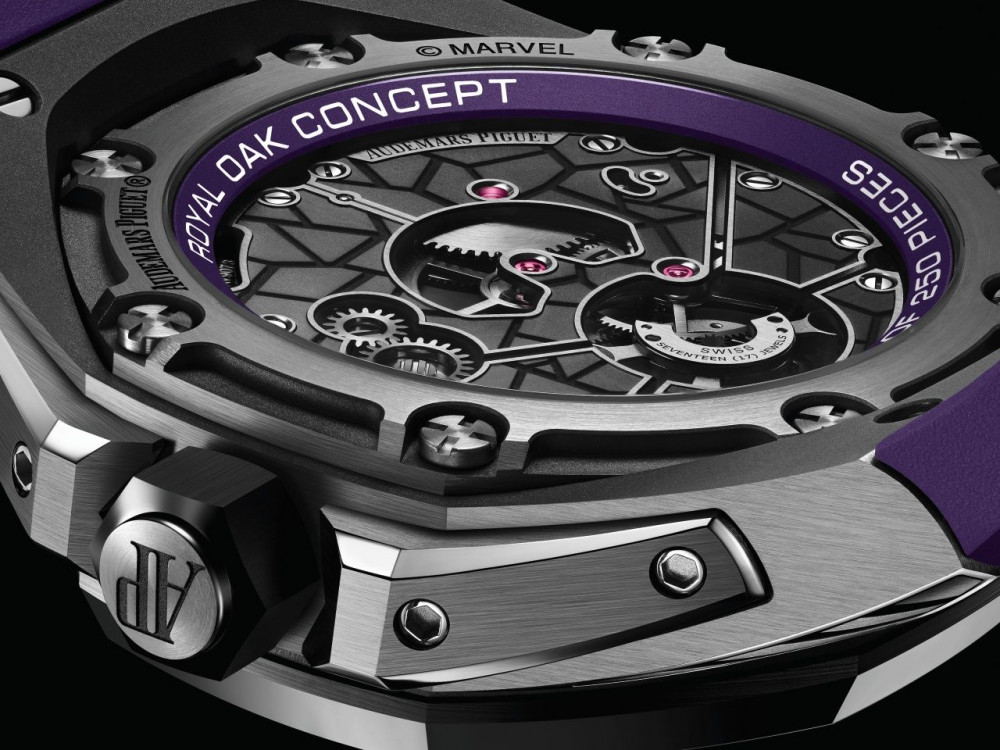 The sapphire caseback showcases the movement’s sandblasted geometric titanium bridges, coated with grey and black PVD, the back of the flying tourbillon cage and part of the gear train. 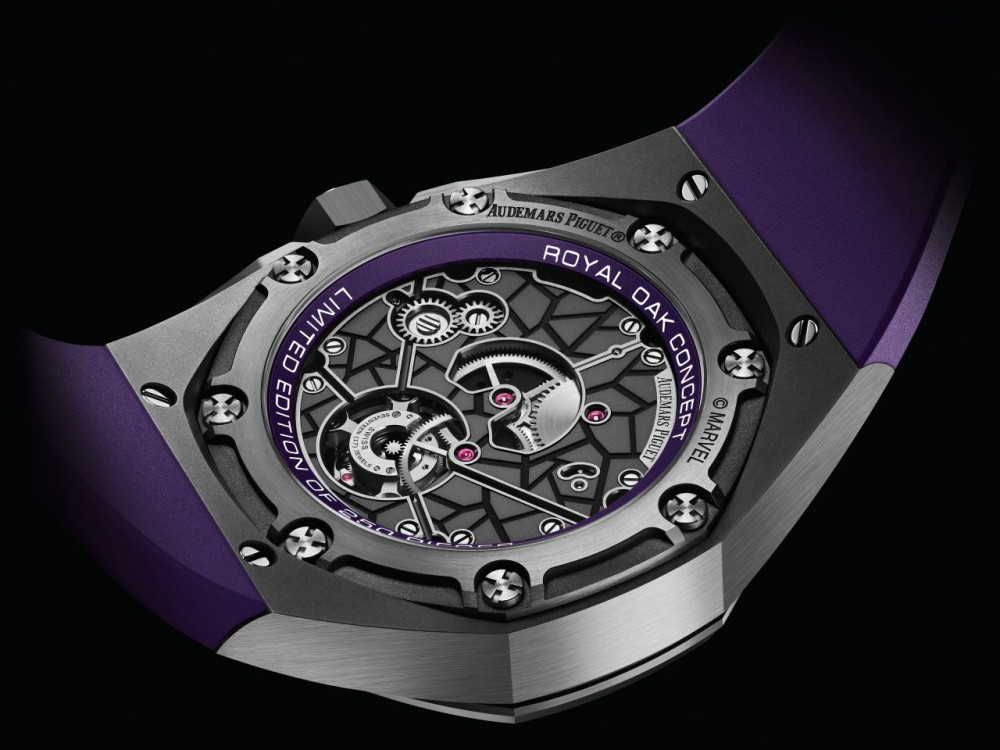 "The Royal Oak Concept collection provides the ultimate opportunity for our watchmakers, case makers, technicians and engineers to be untethered from the conventional industry. These models are all about embracing futurism and charting new territories.”  Michael Friedman Head of Complications. 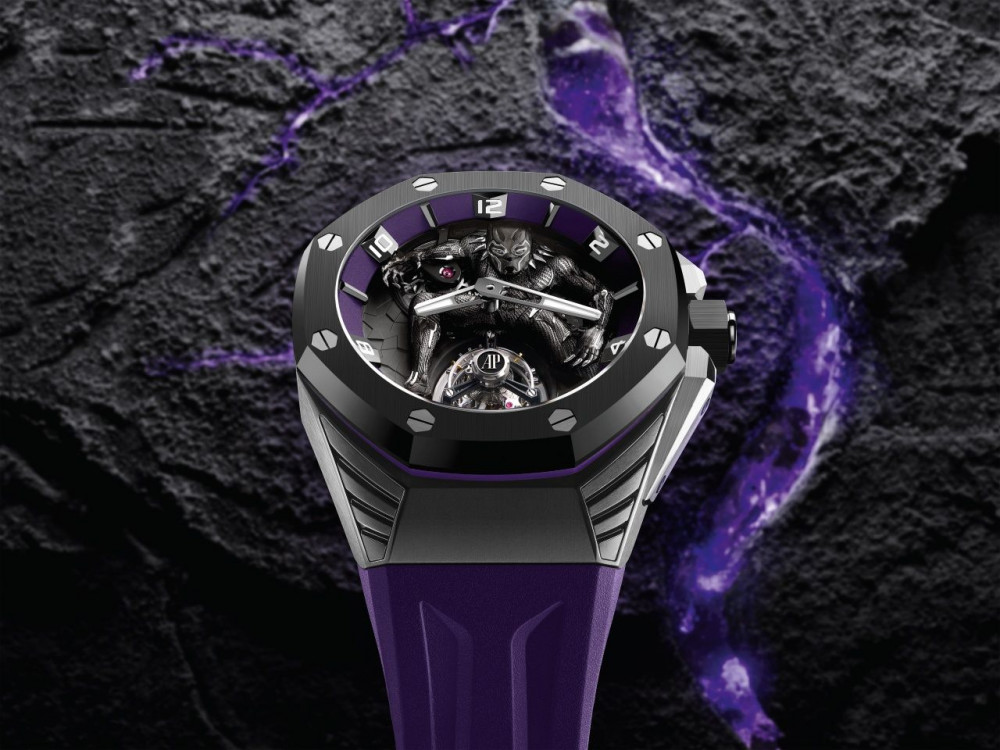 Launched to commemorate the Royal Oak’s 30th anniversary in 2002, the first Royal Oak Concept established an entirely new aesthetics for 21st-century Haute Horlogerie. Initially inspired by Concept cars, this model seamlessly brought together technical precision, futuristic design, high-tech materials and cutting-edge micro-mechanics. Although originally imagined as a one-off limited edition of 150 pieces, this avant-garde timepiece gave birth to a collection. It created a platform at Audemars Piguet to rethink and experiment with what high-end watchmaking could be by leveraging ever-advancing technologies in balance with ancestral savoir-faire. 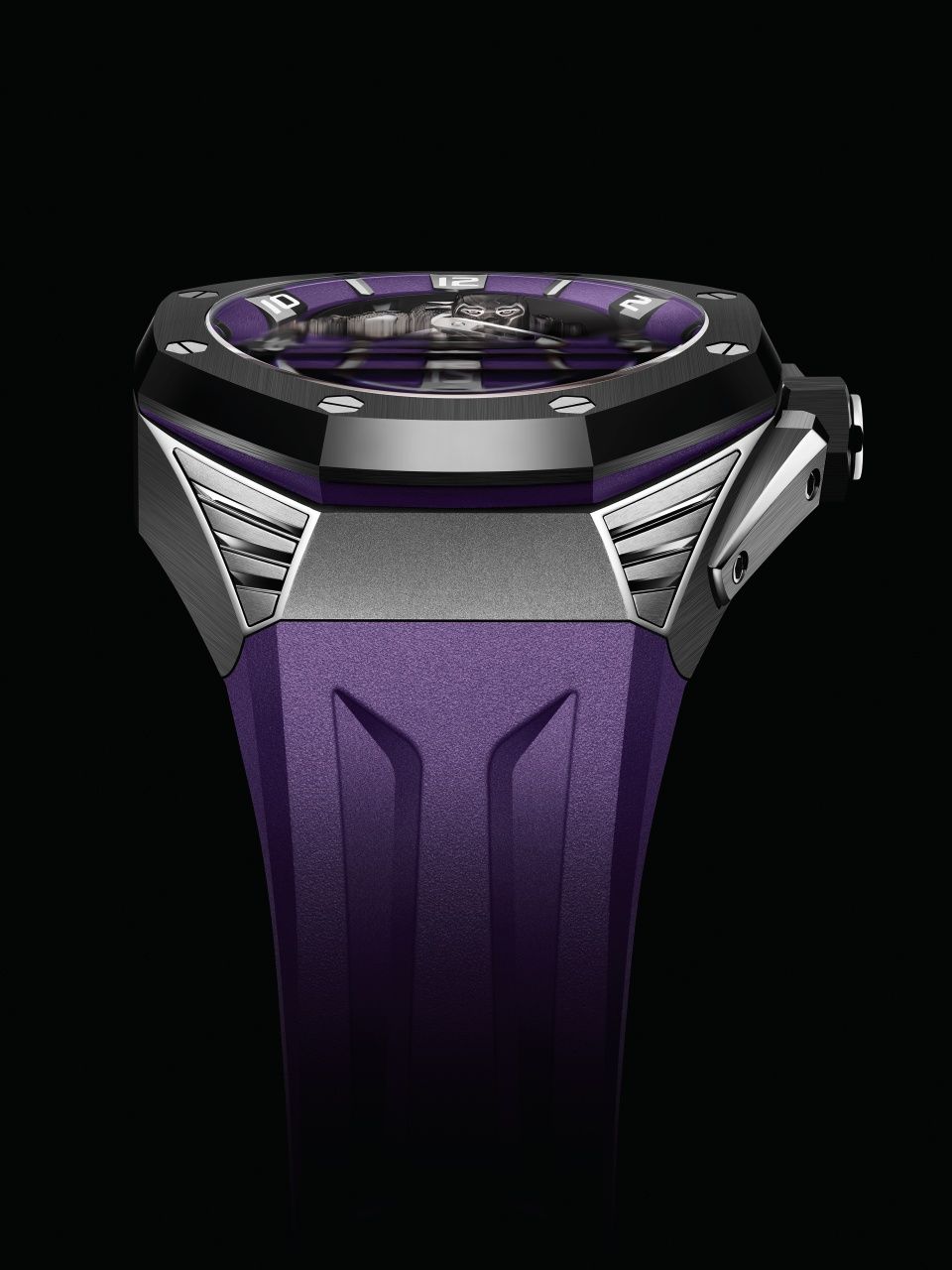 Today, the visionary collection continues to surprise with a complicated timepiece dedicated to all superheroes at heart. Who knew mechanical watches could be so seriously fun? 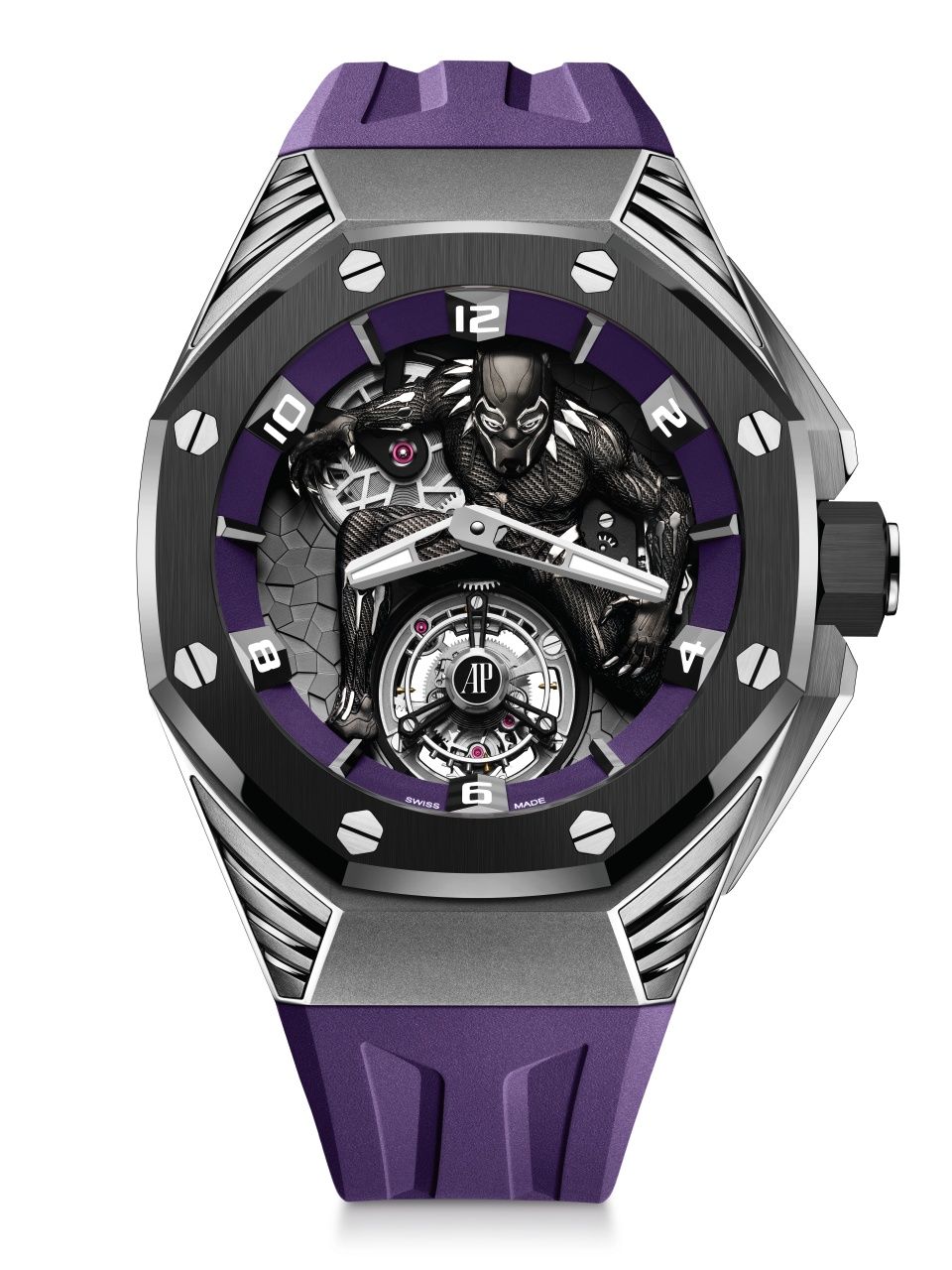