De Bethune presents: DW5 Cempasúchil A one-off creation for the Maestri’art Collection. As every year in Mexico on the Day of the Dead, the Cempasúchil blossom sings the joy of an enduring celebration. This timekeeper is the outcome of a three-way dialogue: A conversation that spans two eras, between two exceptional art engravers.

The first is José Guadalupe Posada, the legendary Mexican engraver and chisel virtuoso who made the dead dance at the end of the 19th century. His work is interpreted with the contemporary talent of Swiss Art engraver Michèle Rothen, working in close concert with Denis Flageollet, master watchmaker and founder of De Bethune. 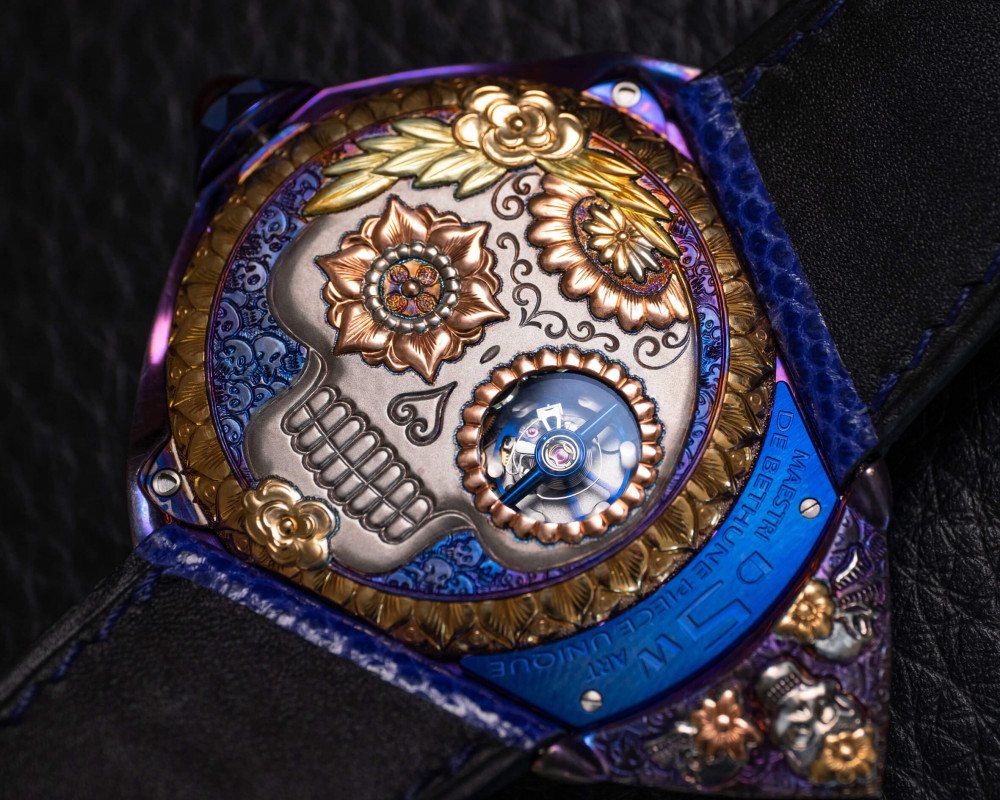 De Bethune celebrates Mexico! De Bethune celebrates the Day of the Dead! Between life and death, tequila shots and religious syncretism where practices and beliefs happily merge on a day that has become part of the Intangible Cultural Heritage of Humanity. Welcome to Mexico, where cemeteries are transformed into dance floors, tombs into tabletops, altars into sumptuous buffets, all blanketed with delicate blossoms of the Cempasúchil (the marigold also called La Flor de los Muertos – the flower of the dead) under the benevolent gaze of La Catrina. 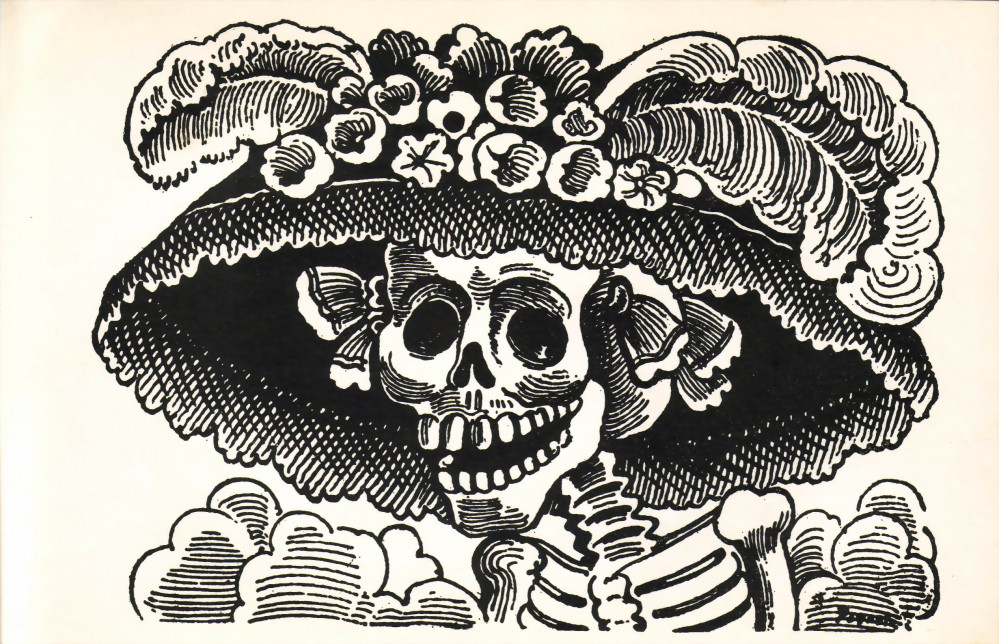 On November 1st and 2nd, the festival mobilizes the entire population. Families gather together, set up richly appointed altars for their dear departed, decorating them with offerings – sometimes modest, sometimes sumptuous, yet always from the heart in loving memory – and visit cemeteries to organize festive meals amidst the gravesites. Inscribed in 2008 on the UNESCO’s Representative List of Intangible Cultural Heritage of Humanity, EL Día de los Muertos, the Day of the Dead is the highlight of the Latin American festivities, with rivers of orange petals from the bouquets of Cempasúchil blossoms that line alleys and bathe them in the intense scent of marigolds, guiding the spirits of the deceased on their journey home.

A tribute to the towering work of Posada

There have been and are many watches on the subject of skulls and the Day of the Dead, but none of them inspired by the engraving of Mexican artist José Guadalupe Posada. With the DW5 Cempasúchil, Denis Flageollet, master watchmaker and founder of De Bethune, establishes a dialogue between his friend, kindred spirit and longtime collaborator, the talented Swiss Art engraver Michèle Rothen, and the renowned Mexican engraver of the last century. 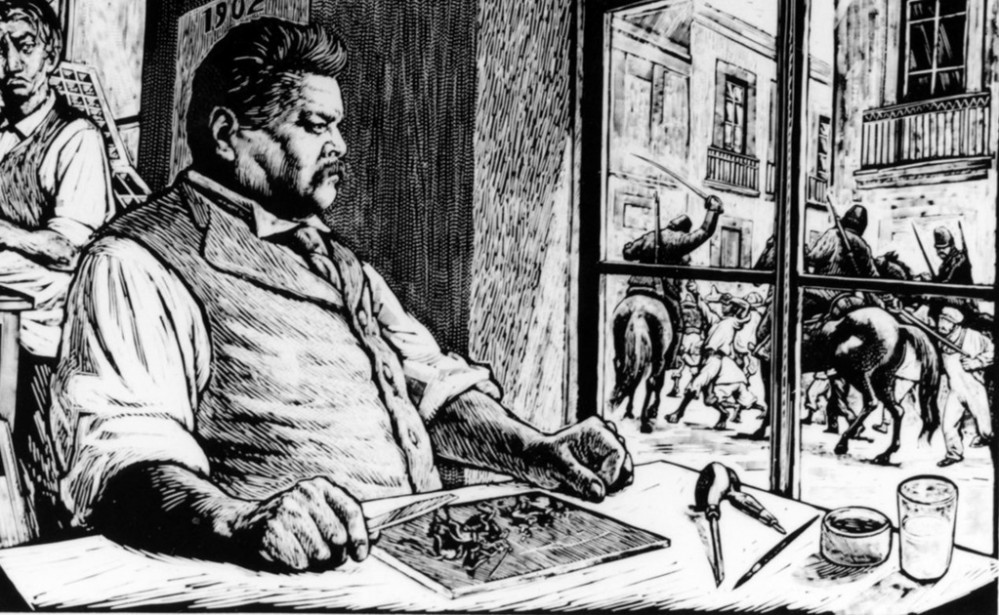 Posada (1852-1913). Engraving genius. His drawings have conquered eternity. Though he passed away in general indifference, he has since never ceased to be rediscovered beyond Mexico, where his work has become part of the national heritage, especially since the centenary of his death in 2013. The engraver of calaveras (‘skulls’ in Spanish) offers images of skeletons more alive than the living.

Blessed with movement, Posada’s droll and picaresque ossuary abolishes the frontier between life and death. Never before has the representation of death been so playful and joyous. The chisel virtuoso has turned the macabre upside down, merging it with the singular way Mexicans celebrate their dead with happiness and joy. At the heart of his creations, the queens of the festival, the calaveras, are everywhere. Smiling skulls, hilarious skeletons coquettishly prancing about in top hats and boaters, Posada’s distinctive eye and hand capture an imagery that overflows with life. With more than 15,000 catalogued engravings, his legacy remains immense. 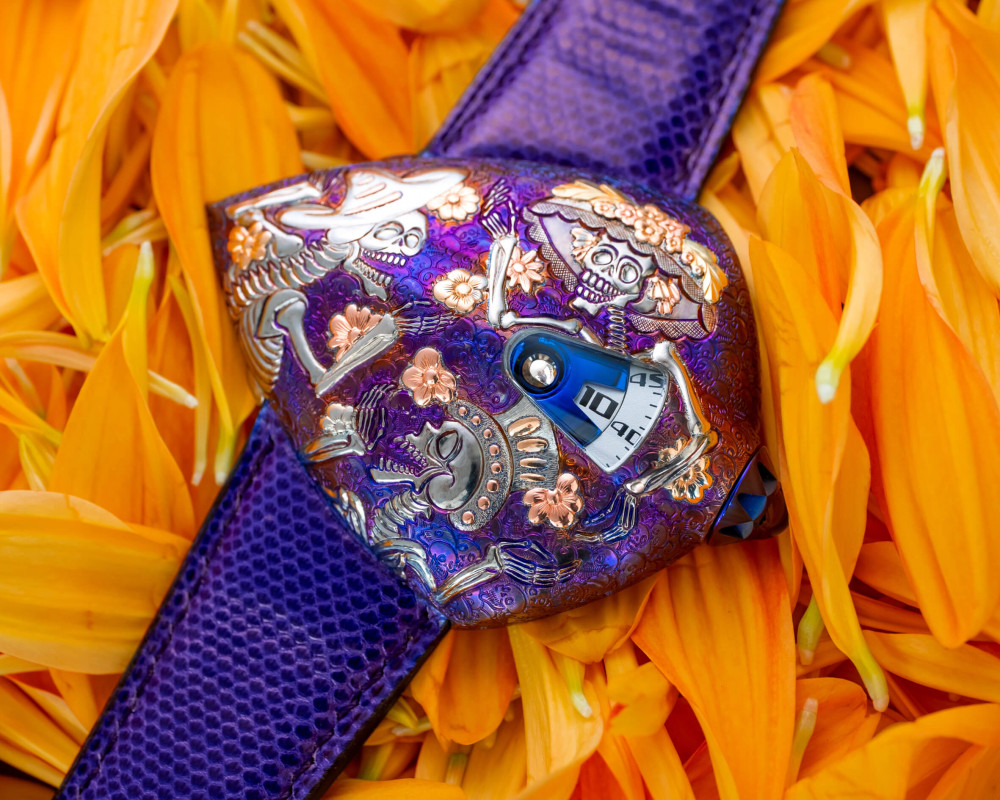 A watch that speaks of joy, as much as it does of precision and complications

Under the pencil stroke of Denis Flageollet and Michèle Rothen, the case of the DW5 Cempasúchil provides a unique spectacle. Where Posada etched his calaveras on flat zinc plates, Denis Flageollet and Michèle Rothen miniaturize them to the extreme, only to give them more relief and volume. On the outside of the timepiece, the watchmaker gives us the phantasmagorical world inspired by the discovery, on a trip across the Atlantic, of an old engraving that depicted a joyful rendering by Posada. On the inside, the real world of watchmaking precision and engineering.

The watch bears witness to a vision of unbridled elation as that expressed by and on the EL Día de los Muertos, yet founded on a deep understanding and respect of the great watchmaking masters of the past, which it transcends and sublimates. Through this unique creation, as a bridge between the worlds of art and watchmaking, De Bethune sets a marker between the realms of life and death. The DW5 Cempasúchil transforms know-how into emotion and technique into pure beauty. For De Bethune, the approach applies just as well to art as it does to watchmaking. The DW5 Cempasúchil belongs to both worlds. It speaks of joy as genuinely as it does of precision and complications.

The alliance of blued titanium and gold. A new technology for combining the two metals

Reaching beyond the challenge of a contemporary reinterpretation of the Mexican artist's engravings, Denis Flageollet and Michèle Rothen introduce the additional technical challenges of not only working with a titanium case, but also of having it flame-blued, hand-engraved, and decorated for the first time with delicate gold inserts, as well as engraved to magnify the Cempasúchil blossoms. And to take the level of difficulty a few notches higher still, several different types of 18K gold alloy are used.

The watch bears witness to a vision of unbridled elation as that expressed by and on the EL Día de los Muertos, yet founded on a deep understanding and respect of the great watchmaking masters of the past, which it transcends and sublimates. Through this unique creation, as a bridge between the worlds of art and watchmaking, De Bethune sets a marker between the realms of life and death. The DW5 Cempasúchil transforms know-how into emotion and technique into pure beauty. For De Bethune, the approach applies just as well to art as it does to watchmaking. The DW5 Cempasúchil belongs to both worlds. It speaks of joy as genuinely as it does of precision and complications.

The colors of metals... one of Denis Flageollet's favorite playgrounds. It quickly became clear to him that the subject at hand, a watch for the Day of the Dead, required a different approach, a playing on nuances to accentuate the edginess of the famous portrait of La Catrina by Posada.

White gold, yellow gold, rose gold, green gold (an 18K gold combined with a smidgeon of silver), and a new ‘marbled’ gold (a blend of white gold, rose gold and yellow gold): Denis Flageollet’s unrivalled knowhow is given free rein at De Bethune’s own foundry in Sainte Croix, enabling him to create new shades of the precious metal to underline the piece’s floral elements. Thanks to a new technique developed in his workshop, the metals seem to naturally harmonize and join together. The multiple levels and shades of the decoration offer a magnificent and subtle visual depth accentuated by the engraved parts.

You will also notice a small two-colored sphere that indicates the moon phases. Composed of two hemispheres, joined and polished, one of blued steel and the other of palladium, the sphere guides the eye to the minimalist digital hours and minutes display, visible through a hand-cut crystal cabochon whose making requires rare mastery. 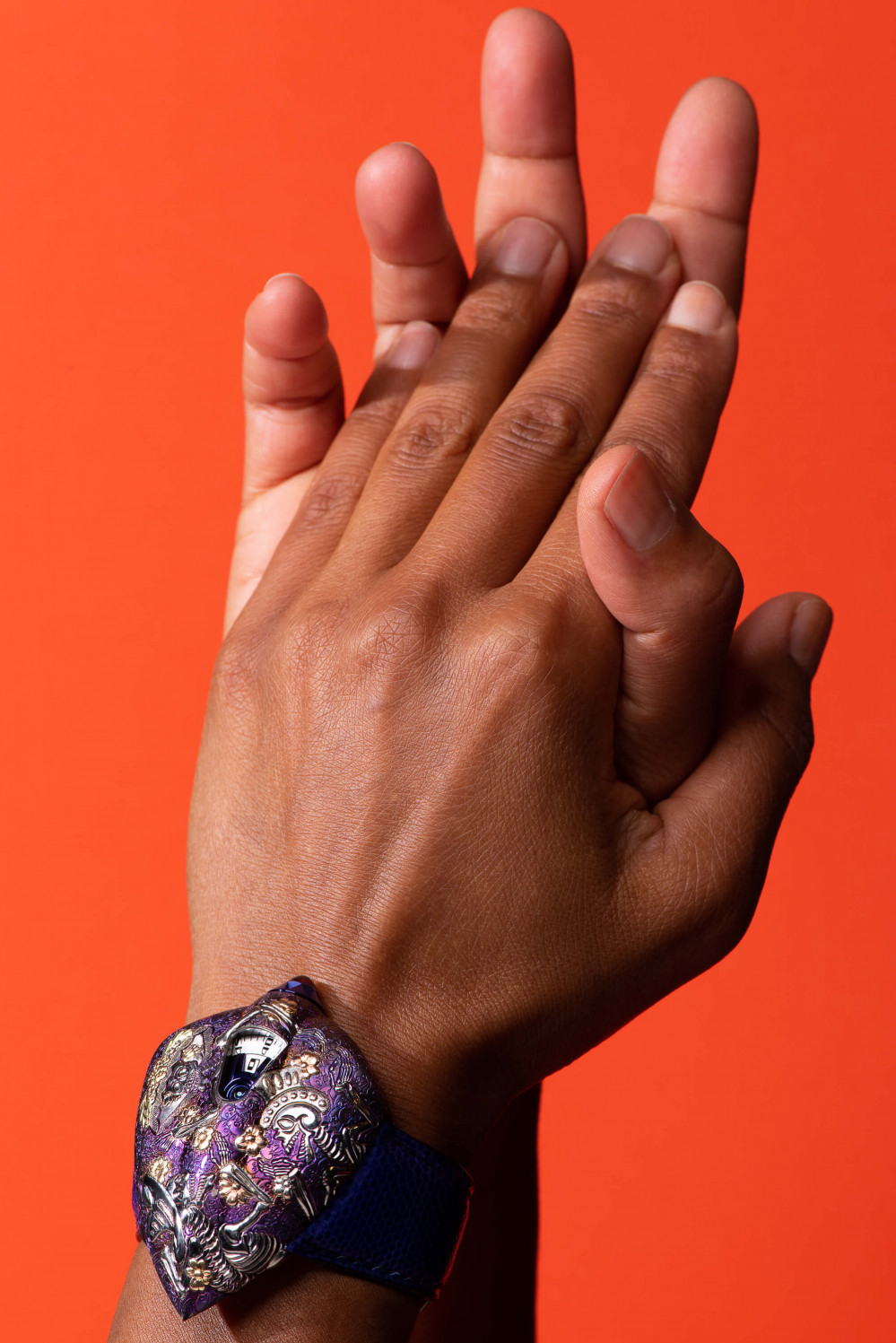 Between engraving and micro-sculpture, Michèle Rothen's work surpasses all standards. Infinite and infinitesimal precision coupled with a Swiss artistic talent that is recognized as among the best. Engraving was particularly difficult on this piece because titanium already presents a challenge in itself (it is a metal even stronger and tougher than steel). Combining it with gold was an insane challenge. Engraving them together added yet another degree of difficulty. First, because of the challenge of getting two diametrically opposed metals to coexist: strong and stiff titanium with soft and malleable gold. Second, because the temperatures at which the two metals can be worked are very different.

To make this timepiece, Denis Flageollet used titanium that he patiently machined, preparing it for the gold inserts, until he obtained the perfect fit for the piece, working it not only before the engraving stage, but also again afterwards, then in the fire to tint it, then on the workbench to polish it by hand, revisiting the state of the metal surfaces at each stage, each microscopic detail, each relief, even sparing some parts to ‘lift’ the design as a means of perfecting the whole. It was like redrawing the piece one last time. 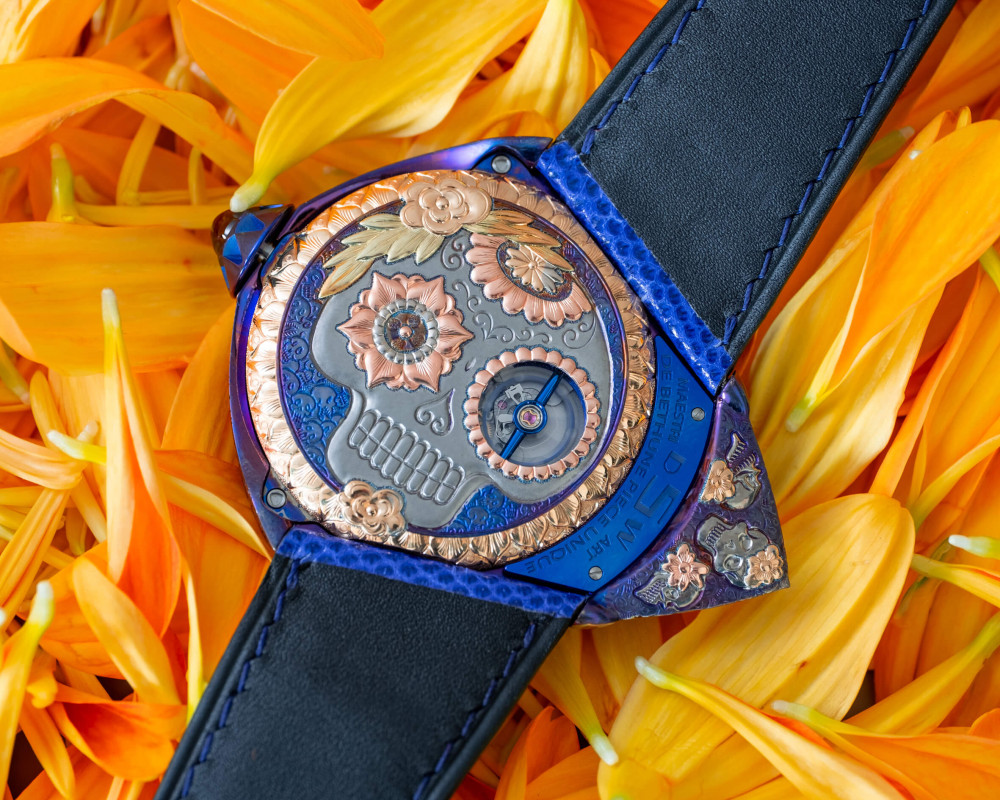 A mischievous wink: the back of the watch is also treated like a true work of art. Also made of titanium and 18K gold, it is adorned with an immense skull, ‘another true calavera’ decorated with multiple flowers, with two large eye sockets, through one of which the movement’s balance-spring can be admired. With the DW5 Cempasúchil, De Bethune interprets the notion of time in Mexican culture, the accepted permeability between the real world and the netherworld, by imagining an object for measuring time that speaks to all these transitions.

A reference to 16th century and late 18th century watches

If De Bethune appreciates the references to the great watchmaking tradition of the Enlightenment, it is also because of the immense creativity that resides at the heart of its contemporary reinterpretations. In Denis Flageollet's opinion, the most beautiful watches representing skulls were undoubtedly made during the Renaissance. Referred to as ‘memento mori’ (Latin for an object kept as a reminder of the inevitability of death), the watches came in the shape of a skull, engraved, finely chiseled, appreciated by connoisseurs since the end of the 16th century. Another technique that has always intrigued him is that applied to pocket watches made of hues of gold, which were very fashionable at the end of the eighteenth century and in the first half of the nineteenth. 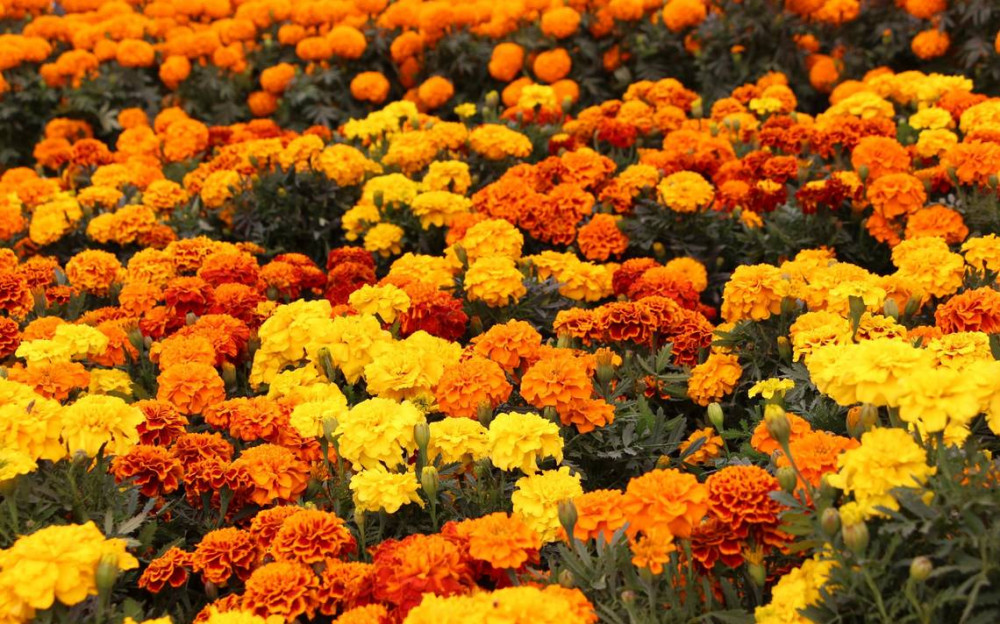 According to beliefs, the petals of the Cempasúchil flower (marigold) retain the warmth of the sun and embody the divine. The name stems from Cempohualxochitl, meaning ‘twenty flowers’ in Nahuatl, the indigenous language of the Aztecs who used it for decoration at burials. The eternal love of Xochitl, materialized by this flower, could heal diseases because it was believed they come from sadness or fear, and true love can heal all. Because sadness, fear, death... It is not an end, but a beginning. Life! The cult of the dead mythologized in joy, the tangle of symbols and colors to celebrate the journeying souls as they transition from our world to the next and back. At the crossroads of a 3,000-year-old tradition and a festival that is more alive than ever, everyone has their own way of celebrating El Día de los Muertos. Ultimately, the DW5 Cempasúchil is the product of extreme mechanical miniaturization at the service of design – of which time is only one element. De Bethune’s tribute to the opus of Posada only appears as a mechanism for counting time, in this playfully joyous and imaginary world that not only plays with time but also has its own sense of time. 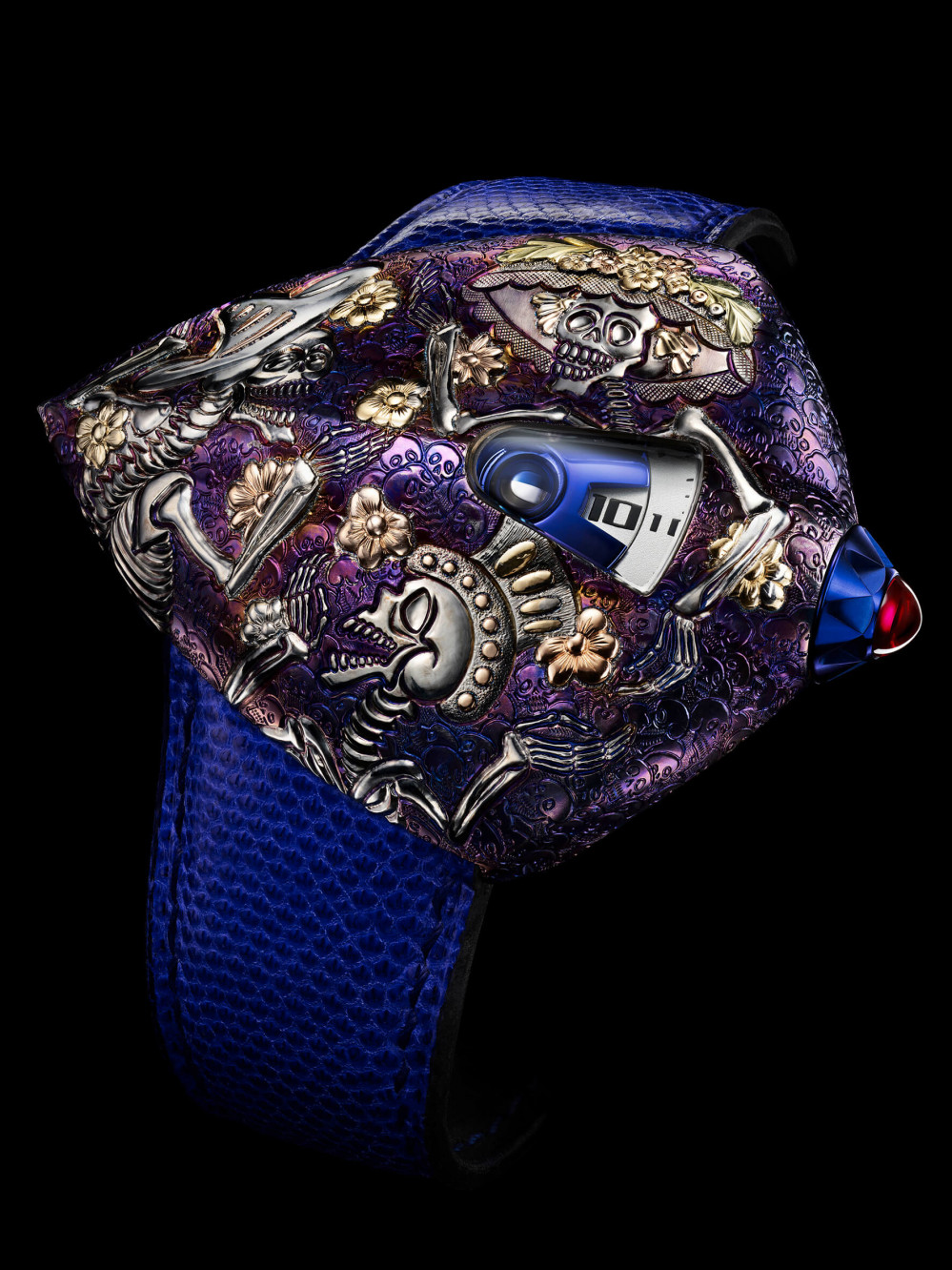