Maximilian Büsser and Friends let the BULLDOG out

The relationship between man and watch is as nuanced as the one between man and dog. The best examples of such connections last for years, even decades, shaping lives and stories. In some cases, the watch chooses its owner as much as the other way around. After all, whether it’s your first or hundredth time, there’s something special about the moment you set eyes on The One. So it is, as they say, with Man’s Best Friend. Presenting Horological Machine N°10 ‘Bulldog’. 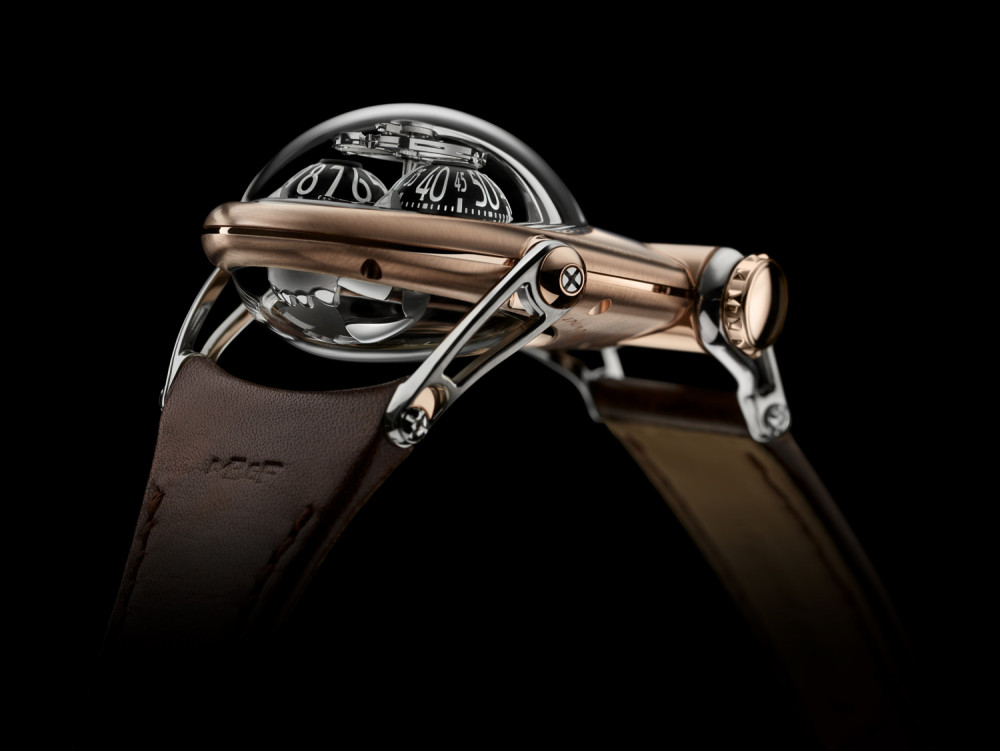 A rounded, compact body of titanium or red gold, coupled with a generous ration of sapphire crystal. Two prominent aluminium time-display “eyes”, rolling at anyone who dares look its way. A collar studded with projections that allow you to wind the mainspring or set the time. Stout but flexible “legs” that wrap firmly around your wrist. A massive jaw. And above all, a big heart beating steadily at 2.5Hz (18,000vph). 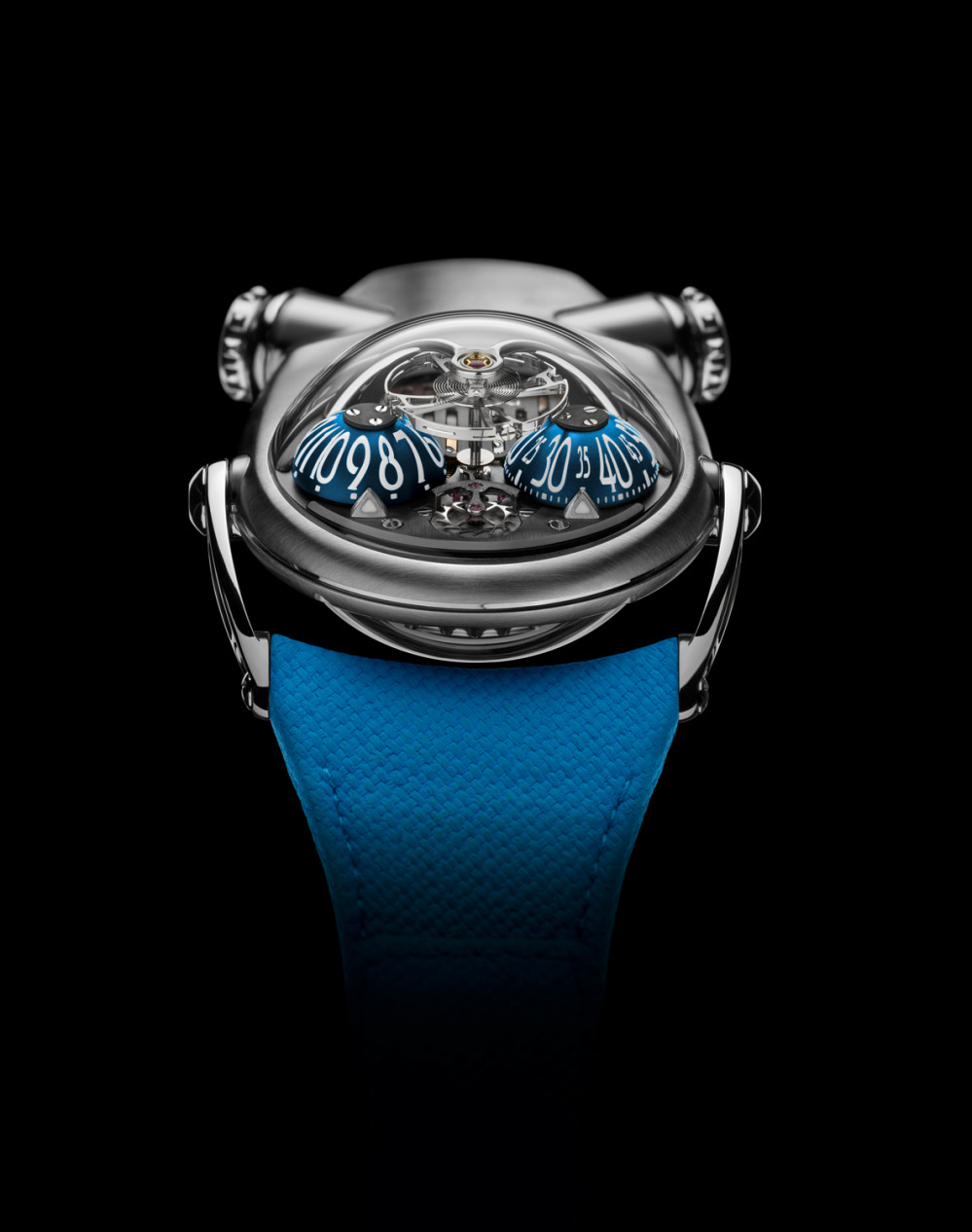 Just like the creature for which it is named, there’s more to HM10 Bulldog than meets the eye. Its hinged jaws open and shut according to the amount of wind left in its mainspring — a fully closed mouth tells you that “Bulldog” is wound down and ready for a nap. If you can clearly see the rows of shining teeth lining the jaws, get ready, because that means “Bulldog” is full of fight, charged up with a 45 hours of mainspring energy. This massive power-reserve indication has been carefully designed and calibrated to consume the least energy possible, allowing HM10 Bulldog to direct its considerable mainspring torque solely towards its suspended balance and its revolving hour and minute domes. 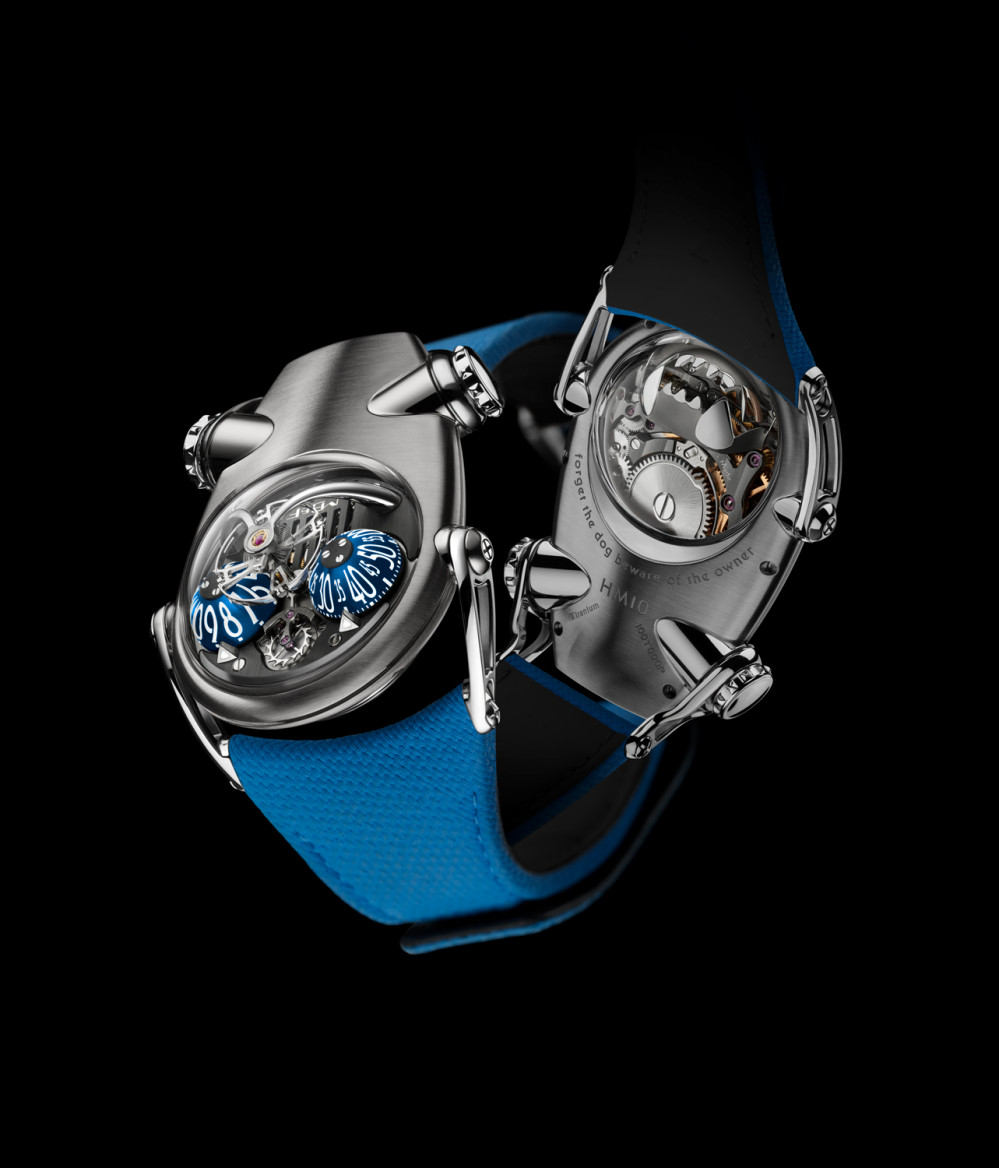 The manual-winding engine of HM10 Bulldog was designed and developed in-house, leveraging the best of MB&F’s technical expertise built up over the years; longtime members of the MB&F Tribe will recognise elements that hew closely to the horological lab’s best-loved creations. The large suspended balance that hovers just beneath the central dome of sapphire crystal was made possible by the various iterations of this mechanism in the Legacy Machine collection. 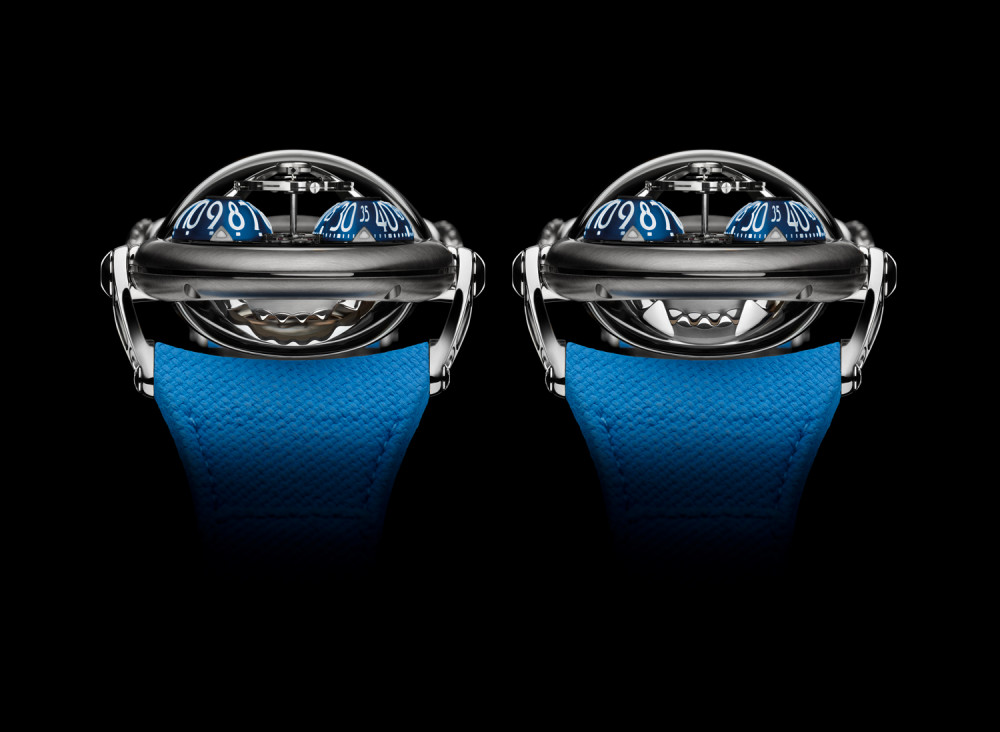 The massive jaws that indicate the level of mainspring wind are a much-expanded demonstration of the power-reserve management that was first deployed in the 2014 LM1 Xia Hang. The paper-thin aluminium domes have their roots in the HM3 Frog and were refined in 2014’s HM6. Even the grillework design motif in the “ribs” set beneath the balance and in the tail-end of the body echoes the automotive-inspired HM8, HMX and HM5. Taken altogether, the message is clear: HM10 Bulldog is a highly bred machine. 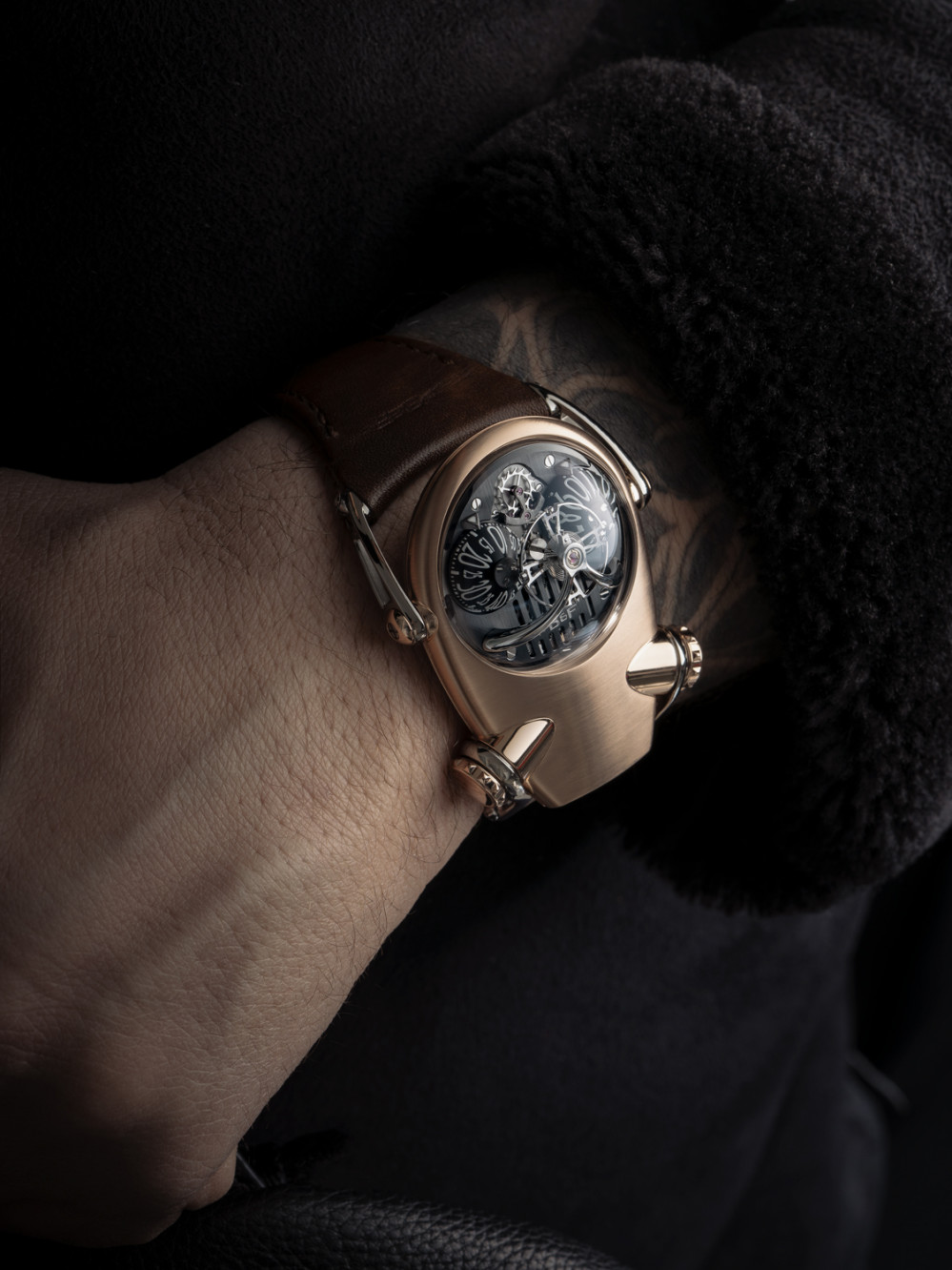 Despite its outsize personality — measuring 45mm across, 54mm from nose to tail and with a maximum height of 24mm — HM10 Bulldog is surprisingly wearable. Its sprung strap attachment “legs” allow the body to fit closely around the wrist, with the calf-leather strap as robust as any well-made leash — fastened with either a folding buckle or Velcro system. Available in both titanium and a combination of titanium and red gold, HM10 Bulldog is assembled with highly distilled expertise in micro-mechanical engineering. Fitting the requisite elements of timekeeping and time display within such a limited three-dimensional volume, while maintaining top levels of artistry and finish, requires careful balance between technical and aesthetic factors. 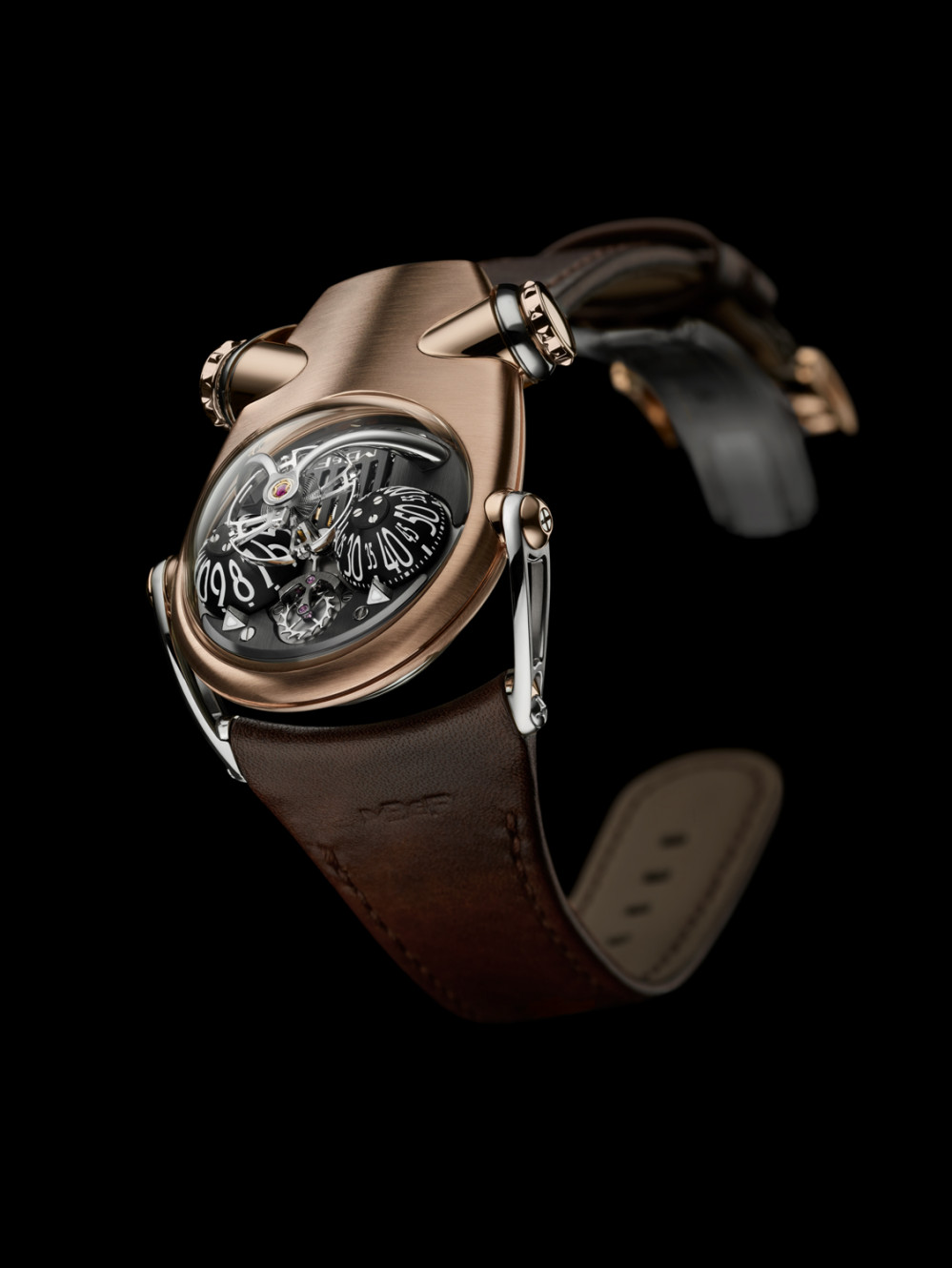 MB&F creations have always attracted a highly loyal audience and HM10 Bulldog returns the favour in spades: its allegiances go solely to its owner. Both the time indication and the power reserve display are visible only from the point of view of the wearer. 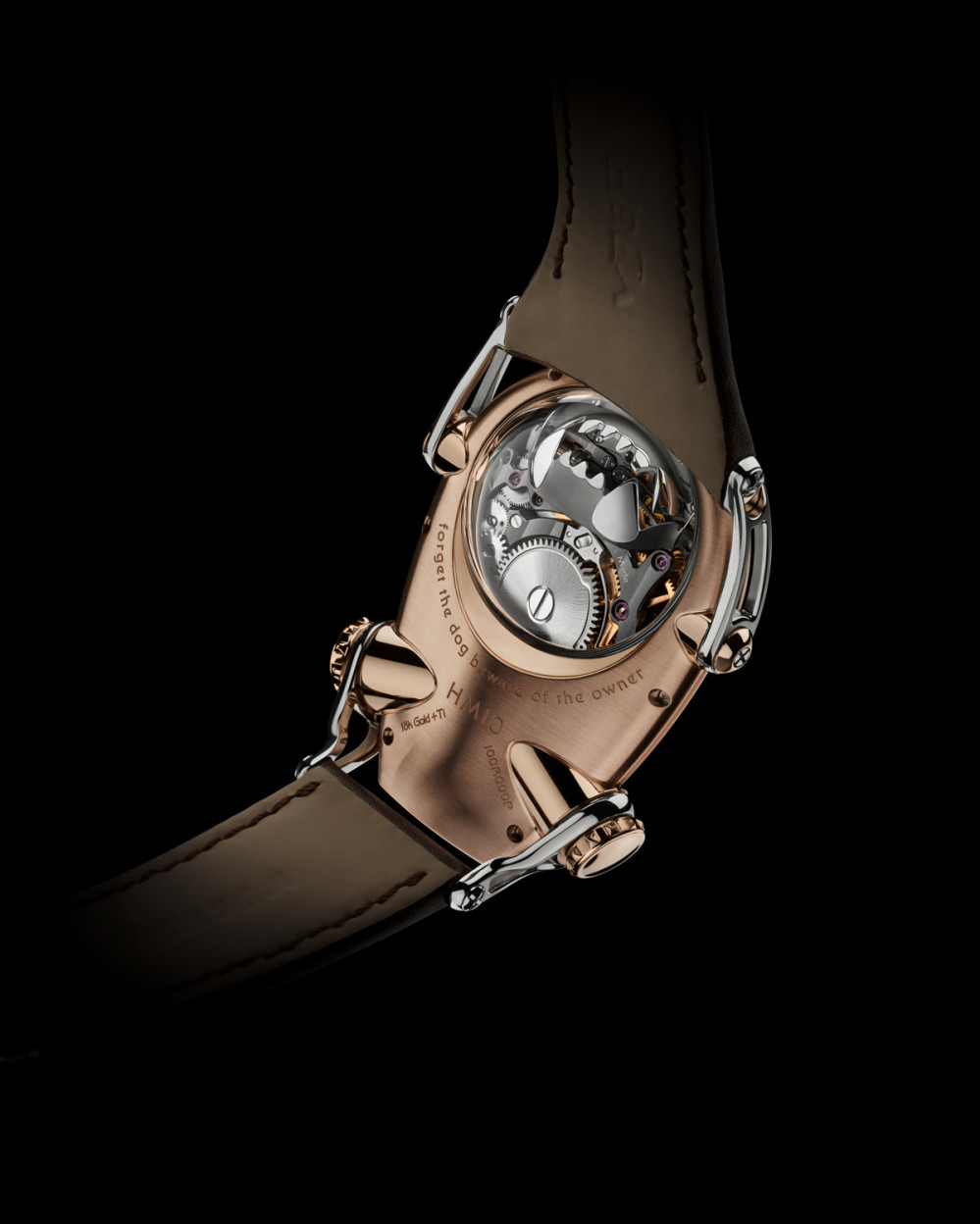 One final piece of advice for those who come across Horological Machine N°10 ‘Bulldog’ is engraved on its body, like a cautionary message you might find on the collar of a particularly feisty canine. The beast may be intimidating, but it ultimately exists in service of another. People would do well to remember — “Forget the dog, beware of the owner”. 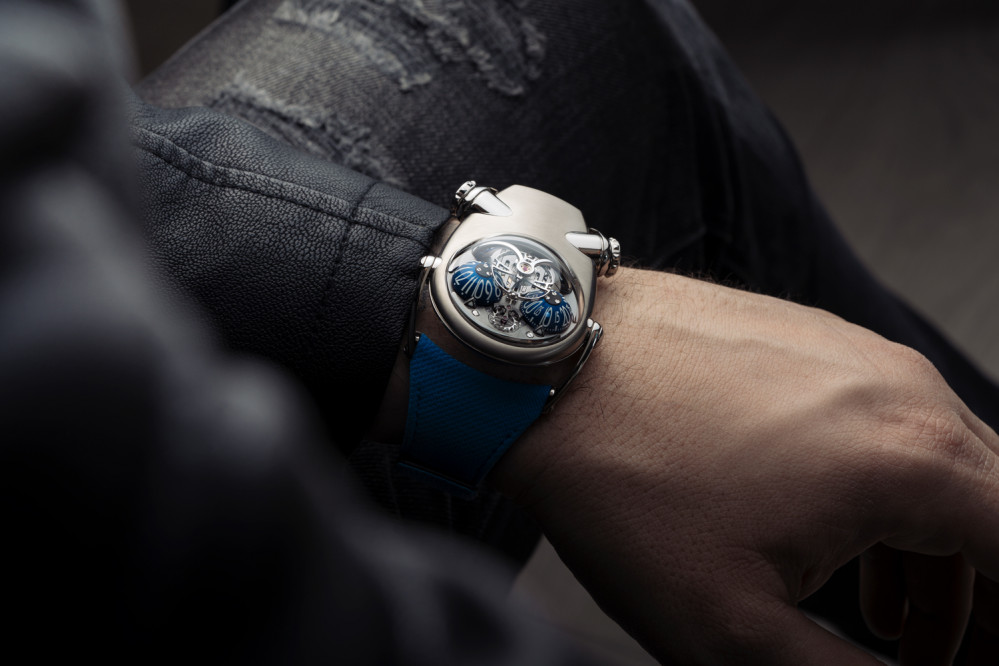 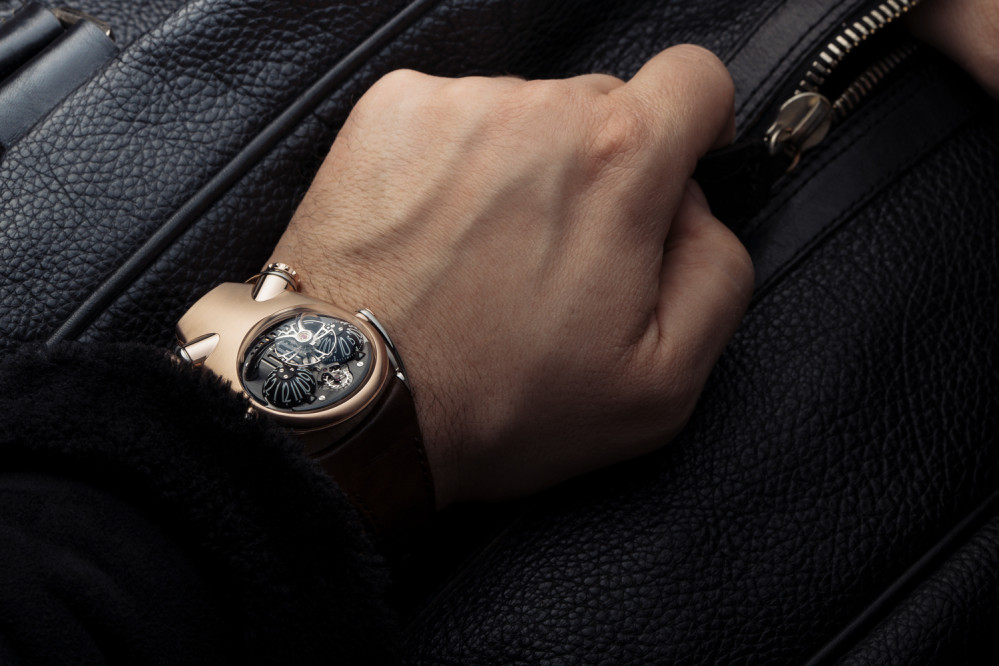 The design came to Maximilian Büsser while he was travelling in Japan; Horological Machine N°10 ‘Bulldog’ bounded up in his mind’s eye just as a loyal pup might greet a returning master.

“What you see now in front of you is more or less exactly what I saw at the time,” says Büsser, “and it was the first time I actually saw a watch in my mind, just like that.” 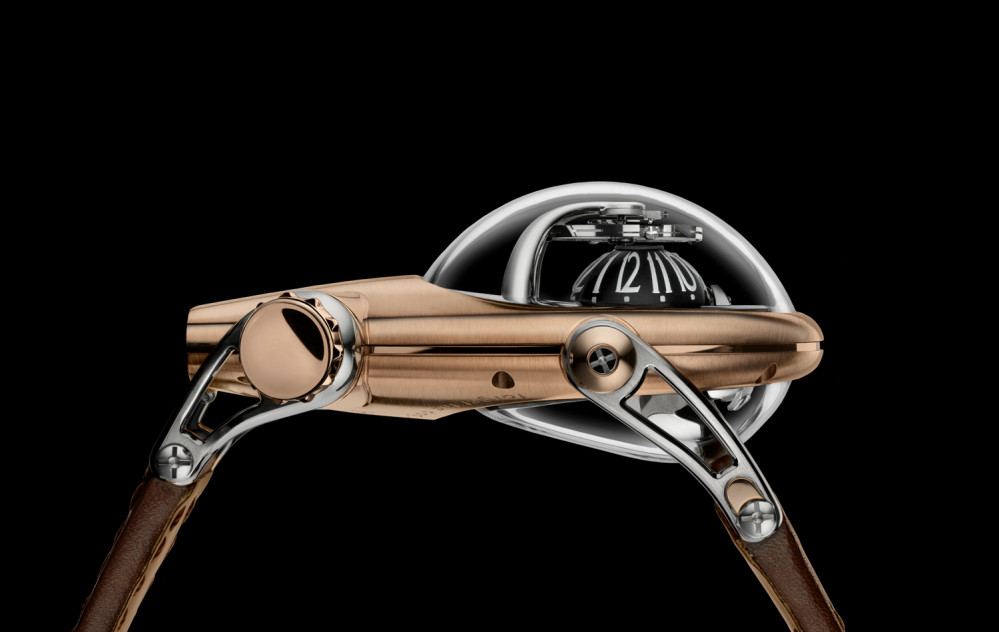 HM10 Bulldog coalesced from various MB&F influences and motifs that dedicated enthusiasts of the brand will immediately recognise. In a deeply affirmative way, HM10 Bulldog is simultaneously a reflection of MB&F and a paean to the fidelity of their followers. The traditional saying “as stubborn as a bulldog” parallels the determination of MB&F to chart an untraditional path outside of conventional watch design, sometimes with creations that have polarised the horological community. In similar vein, the British bulldog may be a dog of pedigree and stature, but it is certainly no crowd-pleaser. 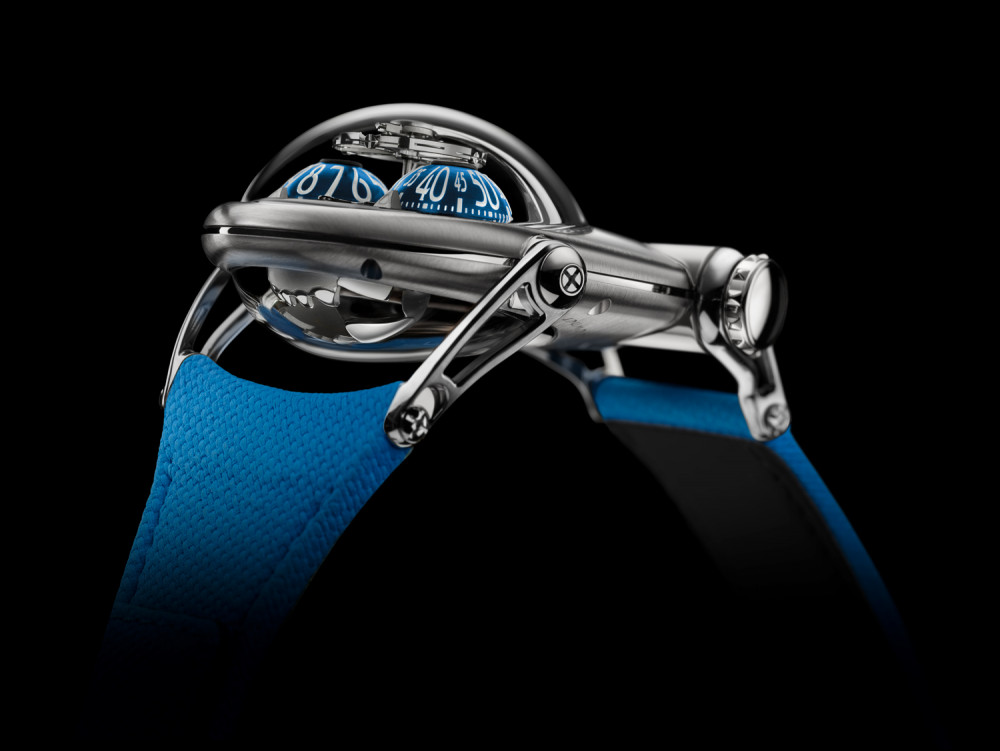 The Latin root for the word “animal” is anima, meaning “soul” or “spirit”; the enlivening element. Little wonder that the MB&F creations that draw inspiration from the natural world — such as Horological Machine N°3 ‘Frog’ and Horological Machine N°7 ‘Aquapod’ — have also provoked some of the strongest responses. HM10 Bulldog follows this evocative path, with its large eyes, expressively mobile mouth and exposed heart. 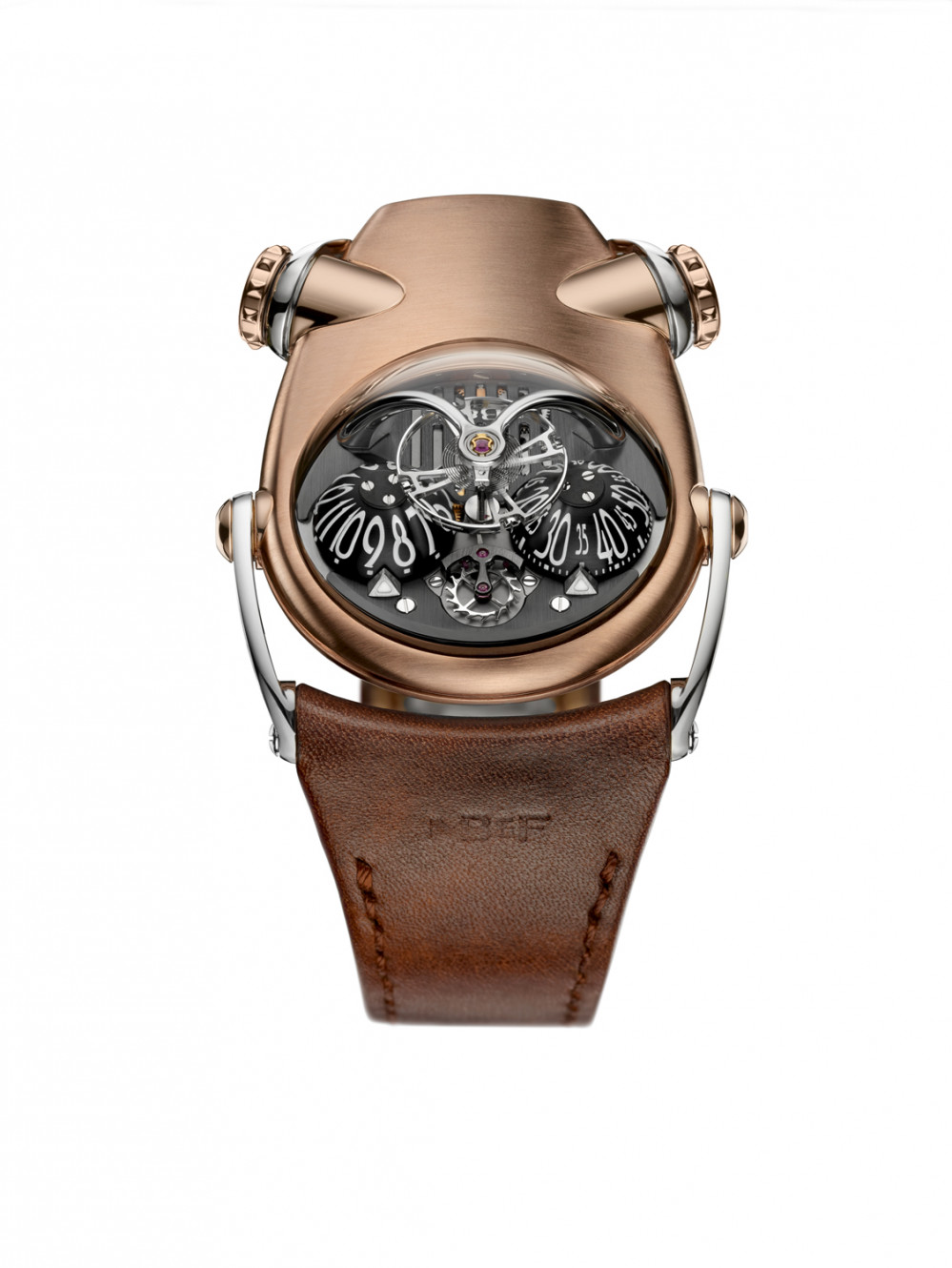 The mechanics driving Horological Machine N°10 ‘Bulldog’ are entirely new but deeply familiar. Completely designed and developed in-house, the HM10 engine is the technical confluence of the various areas of movement expertise at MB&F, honed over years of experience.

The eye-catching balance, suspended beneath the central sapphire crystal dome and beating at the traditional cadence of 2.5Hz (18,000vph), first appeared in an MB&F creation in 2011, with the debut of Legacy Machine N°1. Since then, this technically challenging mechanism has become a unique icon of MB&F, appearing in the majority of Legacy Machines, Horological Machine N°9, and now HM10 Bulldog. 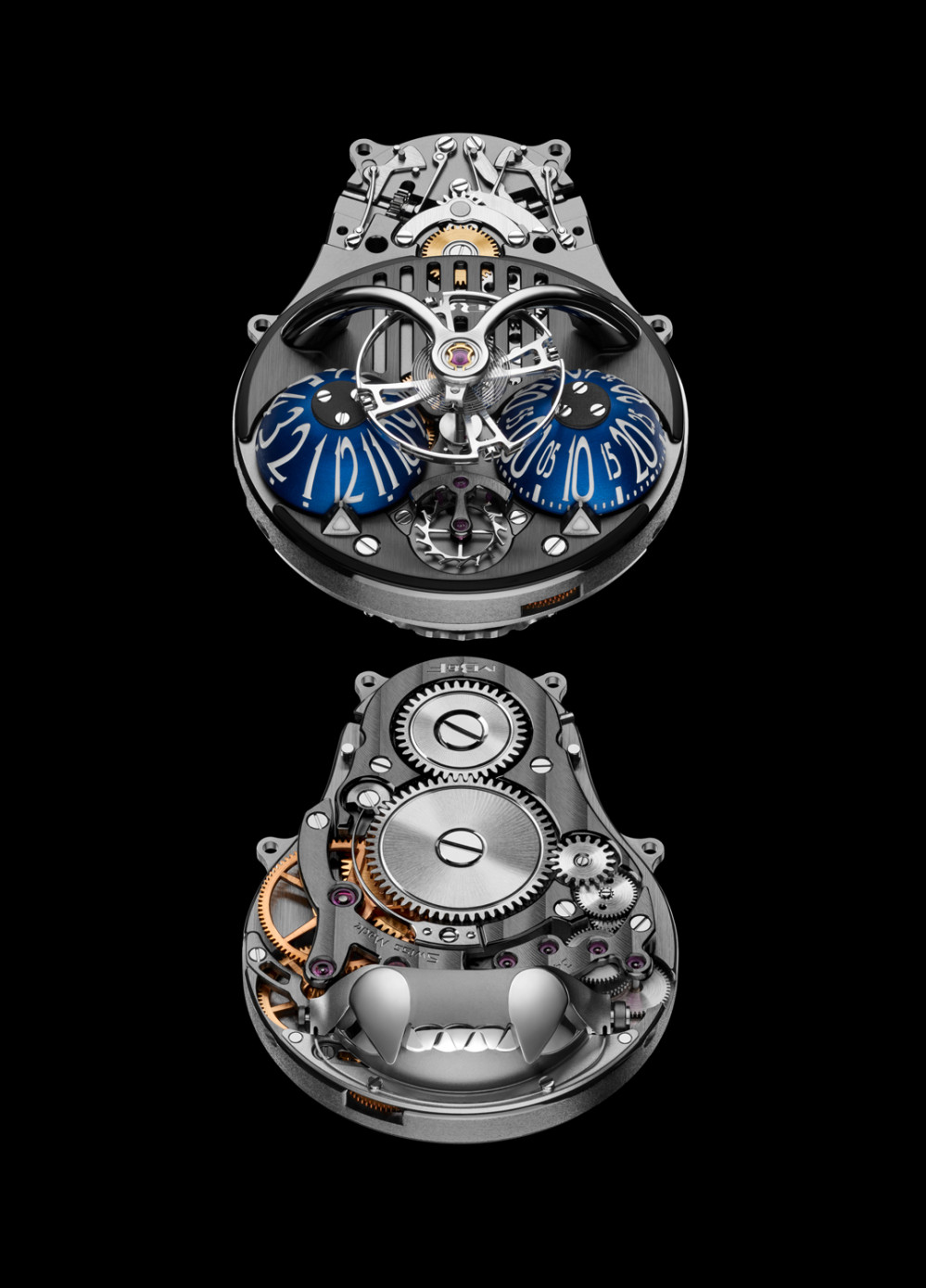 Powerful and startling, the revolving time-telling domes of HM10 Bulldog originated in the conical hour- and minute-modules of the first Horological Machine N°3, the creation that cemented MB&F’s reputation as a disruptive horological force. Subsequently, the cones took on rounded forms in HM3 ‘Frog’, but the one factor that remained constant was the urgent need to make them as light as possible, so that they placed minimal stress on the rest of the engine. Conventional milling processes were reworked and tolerances were sliced micro-fine in order to produce paper-thin aluminium components in three dimensions. These components later appeared again in Horological Machine N°6, this time paired with conical gearing to enable the highly precise display of time. 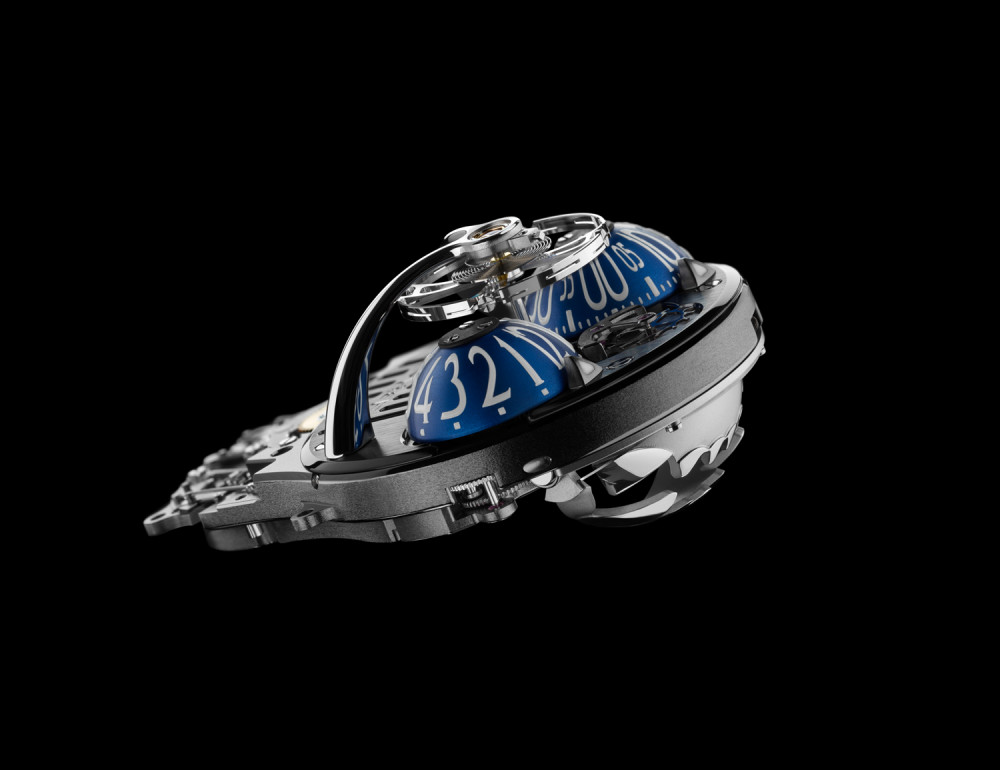 The 301-component HM10 engine is manual-winding, with a single barrel that imparts 45 hours of power reserve, indicated by the opening and shutting of external hinged jaws. Whereas conventional examples of power-reserve display will aim for a simple hand indicator that consumes as little energy as possible, HM10 Bulldog has chosen to make a statement of strength with its impossible-to-miss display. Separate crowns are actuated for winding and time-setting, located towards the rear of the HM10 Bulldog body. 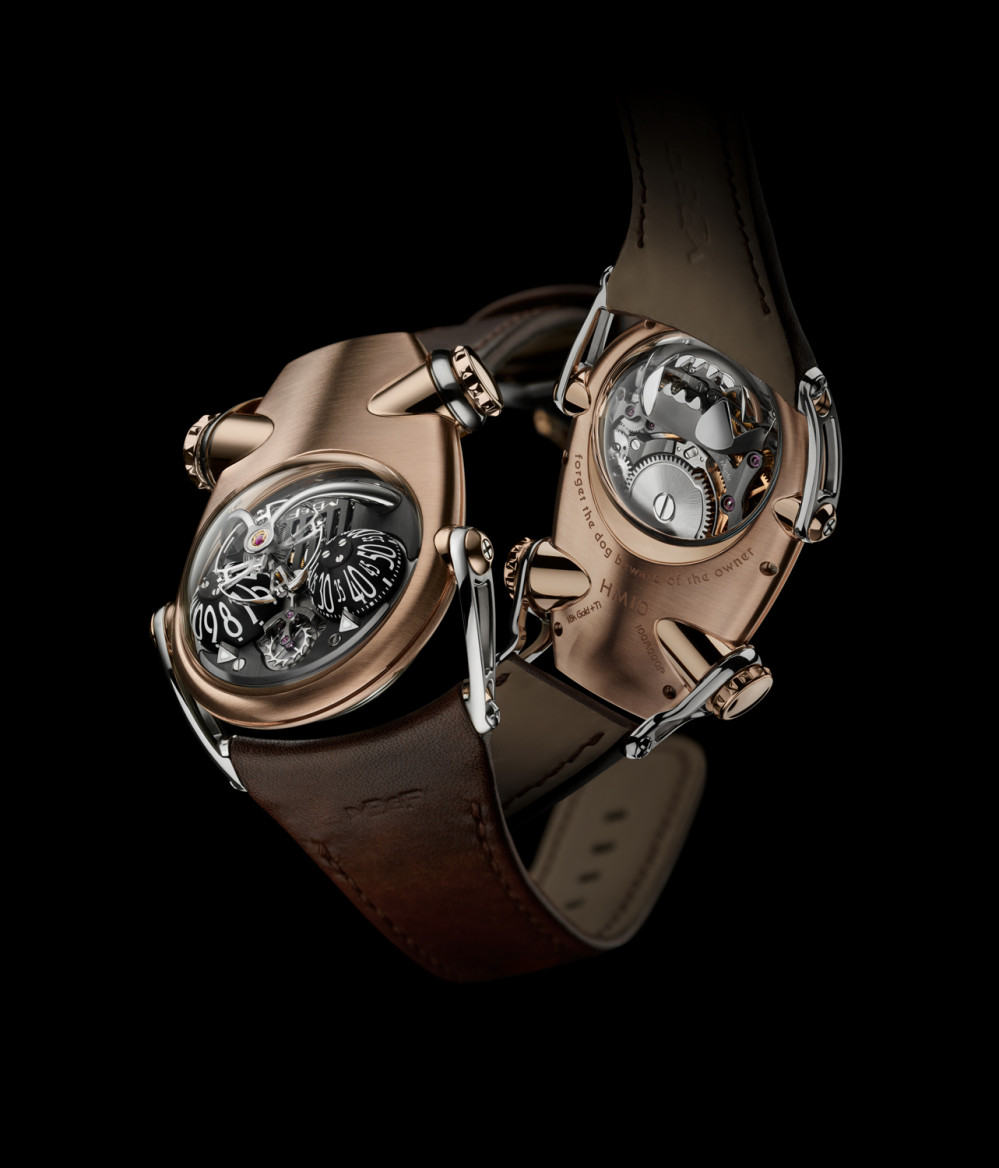