First launched in 2015, the LM Perpetual has been crafted since in red gold, platinum, white gold and titanium. A new 18k yellow gold case with striking blue face now joins the series: a limited edition of 25 pieces.

Beginning with a blank sheet of paper, MB&F and independent Irish watchmaker Stephen McDonnell have completely reinvented that most traditional of horological complications: the perpetual calendar. The result is Legacy Machine Perpetual, featuring a visually stunning in-house movement – developed from the ground up to eliminate the drawbacks of conventional perpetual calendars. 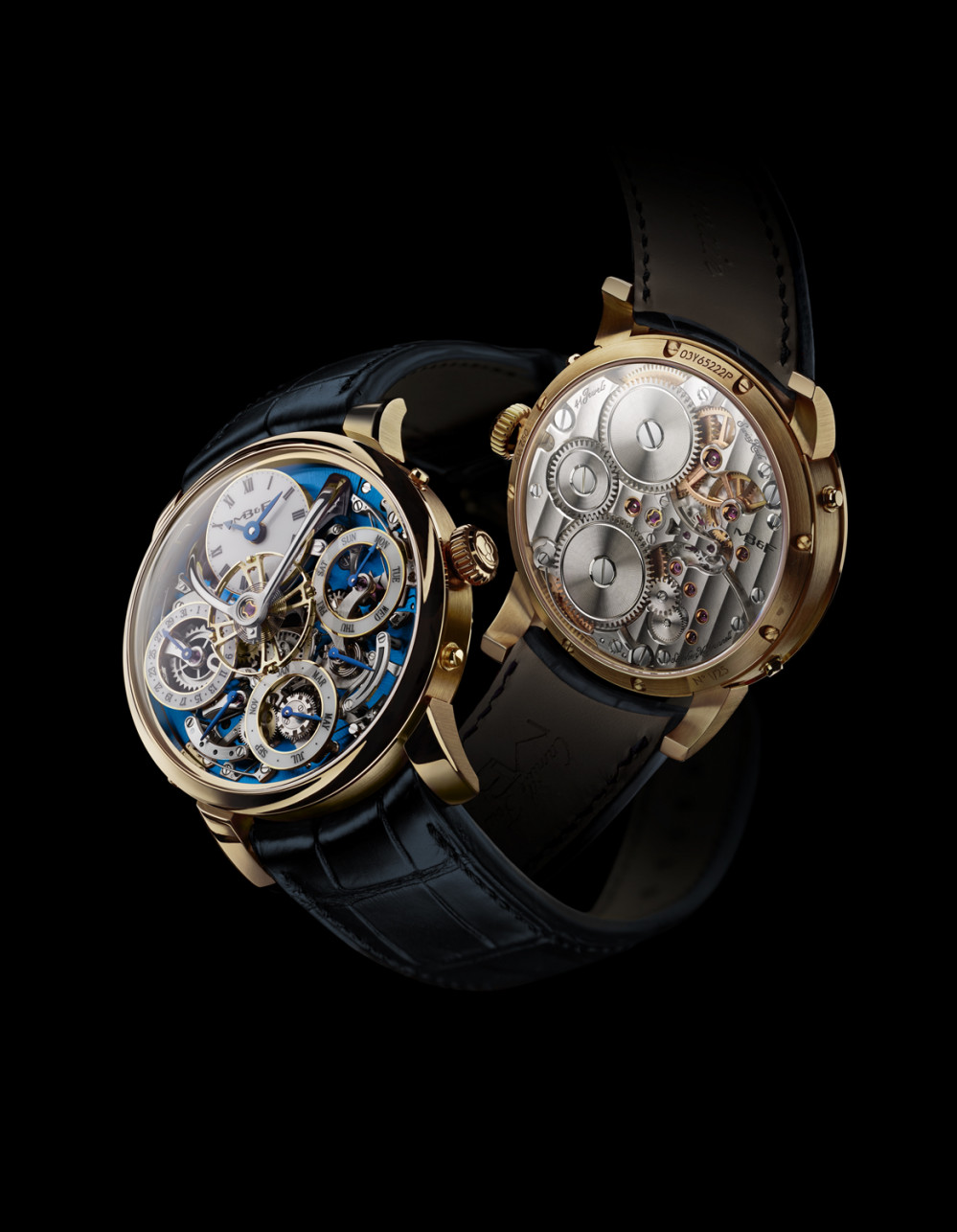 The fact that the new complication looks sensational and can be fully appreciated dial-side is just one of the many benefits offered by the new movement, controlled by a mechanical processor. LM Perpetual features a fully integrated 581-component calibre − no module, no base movement − with a revolutionary new system for calculating the number of days in each month. And it holistically reinterprets the aesthetics of the perpetual calendar by placing the full complication on dial-free display underneath a spectacular suspended balance.

The perpetual calendar is one of the great traditional complications, calculating the apparently random complexity of the varying numbers of days in each month − including the 29 days in February during leap years. But traditional perpetual calendars do have a few drawbacks: dates can skip; they are relatively easy to damage if adjusted while the date is changing; and the complications are usually compromises of modules powered by base movements. The fully integrated, purpose-built movement of Legacy Machine Perpetual has been designed from scratch for trouble-free use: no more skipping dates or jamming gears, and the adjuster pushers automatically deactivate when the calendar changes, so no problems there either!

Traditional perpetual calendar mechanisms use a 31-day month as the default and basically "delete" superfluous dates for the months with fewer days – by fast-forwarding through the redundant dates during changeover. A traditional perpetual calendar changing from February 28 to March 1 scrolls quickly through the 29th, 30th and 31st to arrive at the 1st.

LM Perpetual turns the traditional perpetual calendar system on its head by using a “mechanical processor” instead of the conventional space-consuming grand levier (big lever) system architecture. The mechanical processor utilises a default 28-day month and adds extra days as required. This means that each month always has the exact number of days required; there is no fast-forwarding or skipping redundant days. And while the leap year can only be set on traditional perpetual calendars by scrolling through up to 47 months, LM Perpetual has a dedicated quickset pusher to adjust the year.

With its open dial revealing the full complication and suspended balance, it's the harmonious mechanical beauty of LM Perpetual that really steals the show. And in an interesting technical twist, that eye-catching balance hovering on high is connected to the escapement on the back of the movement by what is likely to be the world's longest balance staff.

Using an innovative system developed especially for Legacy Machine Perpetual, the subdials appear to "float" above the movement with no visible attachments. The skeletonised subdials rest on hidden studs, which is technically impossible with traditional perpetual calendar mechanisms because they would block the movement of the grand levier. 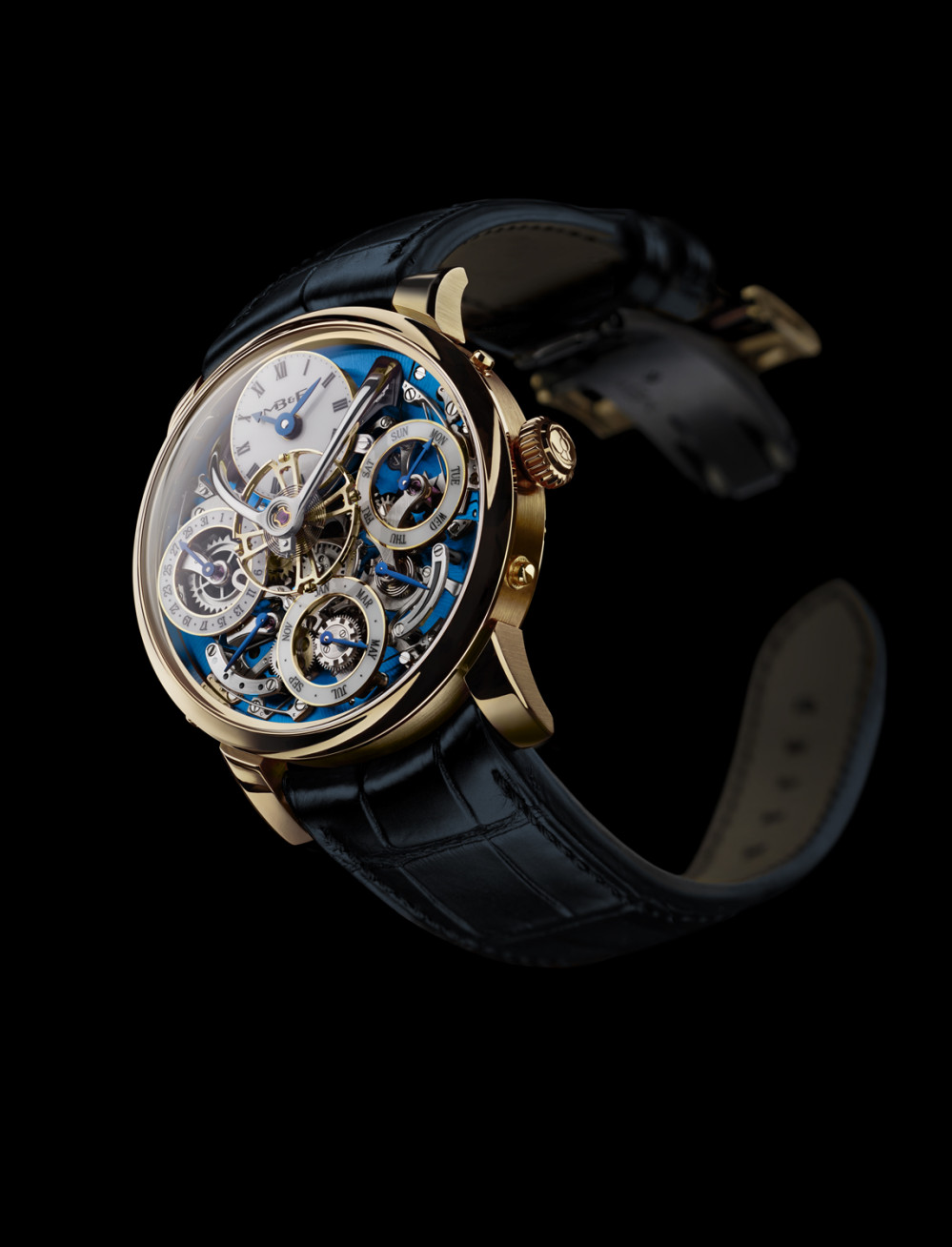 Taking a clockwise tour of the dial, at 12 o'clock we see the hours and minutes nestled between the elegant arches of the balance; day of the week at 3 o'clock, power reserve indicator at 4 o'clock, month at 6 o'clock, retrograde leap year indicator at 7 o'clock, and date at 9 o'clock. 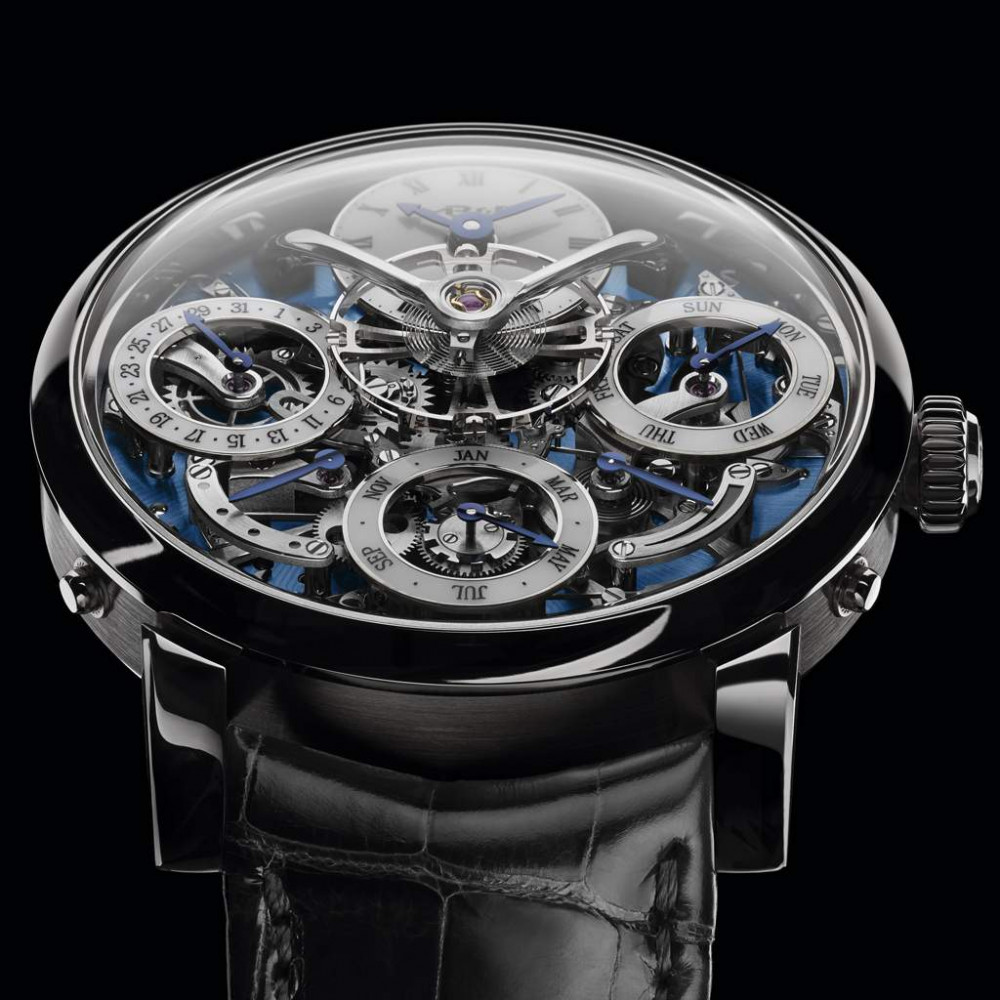 The Legacy Machine collection was conceived when MB&F owner and creative director Maximilian Büsser started fantasising. "What would have happened if I had been born in 1867 instead of 1967? In the early 1900s the first wristwatches appear, and I would want to create three-dimensional machines for the wrist, but Grendizers, Star Wars, and fighter jets would not have been around for my inspiration. But I do have pocket watches, the Eiffel Tower, and Jules Verne, so what might my 1900s machine look like? It has to be round and it has to be three-dimensional." The result of this was Legacy Machine No.1, first launched in 2011 – followed later by LM2 and LM101.

The LM Perpetual project began with a meeting between Maximilian Büsser and Northern Irish watchmaker Stephen McDonnell. McDonnell had been a long-time Friend of the brand and played an instrumental role in the realisation of MB&F's very first timepiece, Horological Machine No.1. As Büsser was thinking of developing a perpetual calendar for the fourth watch in the Legacy Machine collection, McDonnell replied that he had an idea for a perpetual calendar that addresses many of the drawbacks associated with conventional examples. 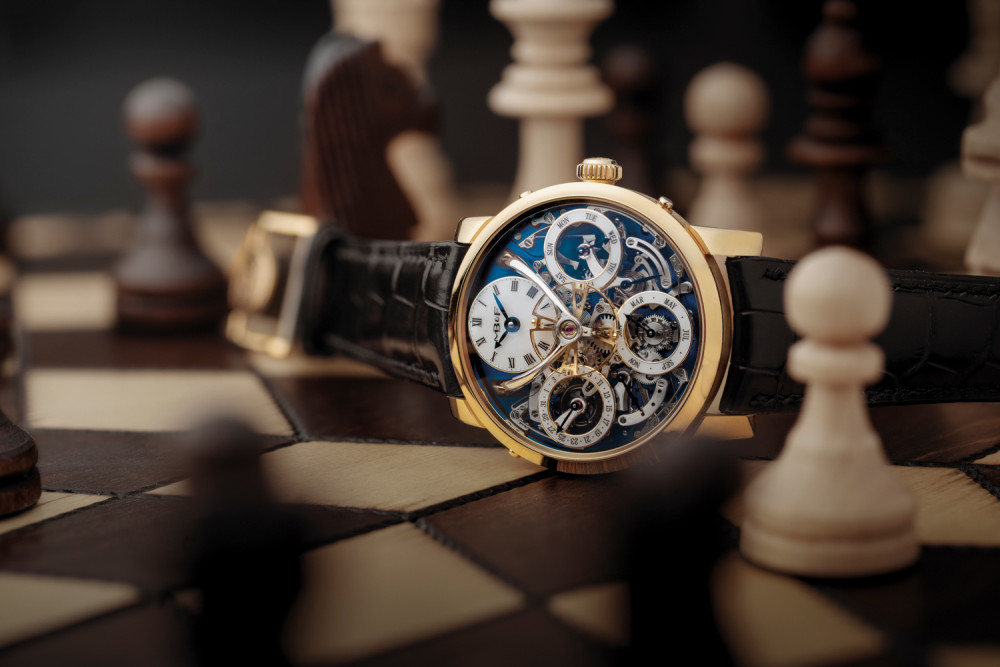 Conventional perpetual calendars are generally modules comprising the complication, which is fitted on top of an existing movement. The calendar indications are synchronised by a long lever (in French: grand levier) running across the top of the complication and passing through the centre. As the date changes, this long lever transmits information to the appropriate components and mechanisms by moving backwards and forwards.

The existence of the grand levier means that there can be nothing in the centre of the complication that might impede it – like a suspended balance with its staff running right down through the centre of the movement to an escapement on the back. This lever also means that perpetual calendars require a full dial, which may have cut-outs or windows, as it is impossible to support subdials with studs because they would block the motion of the big lever mechanism.

In the traditional grand levier system, perpetual calendars assume that, by default, all months have 31 days. At the end of months with less than 31 days, the mechanism quickly skips through the superfluous dates before arriving at the 1st of the new month. Any manipulation or adjustment of the date during changeover can result in damage to the mechanism, requiring expensive repairs by the manufacturer. The dates can also jump or skip during changeover, negating the whole point of the perpetual calendar in the first place, which is not requiring adjustment for years. Or decades.

"I call perpetual calendars boomerang watches because they come back for repair so often,” says Maximilian Büsser. “The mechanisms jam, block, break, or jump days when they shouldn't." 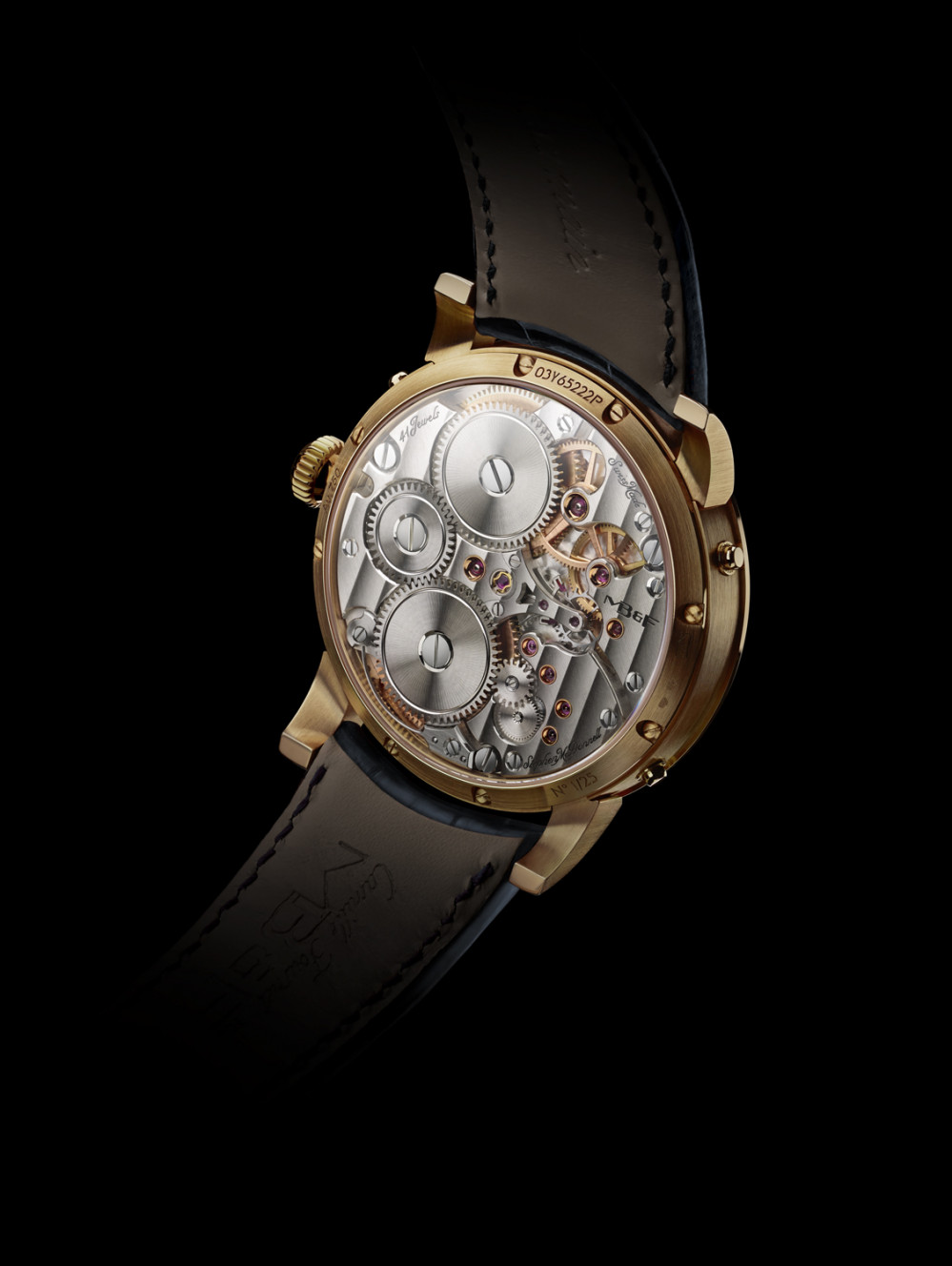 Legacy Machine Perpetual uses a “mechanical processor” consisting of a series of superimposed disks. This revolutionary processor takes the default number of days in the month at 28 – because, logically, all months have at least 28 days – and then adds the extra days as required by each individual month. This ensures that each month has exactly the right number of days. There is no "skipping over" redundant days, so there is no possibility of the date jumping incorrectly. Using a planetary cam, the mechanical processor also enables quicksetting of the year so that it displays correctly in the four-year leap year cycle, whereas traditional perpetual calendar mechanisms require the user to scroll through up to 47 months to arrive at the right month and year.

The mechanical processor also enables an inbuilt safety feature that disconnects the quickset pushers during the date changeover, eliminating any risk of damage while the date is changing. While the conception and development of this mechanical processor-controlled perpetual calendar complication is a noteworthy achievement in itself, Stephen McDonnell went even further by managing to place all 581 components of the movement in virtually the same-sized case as LM1. 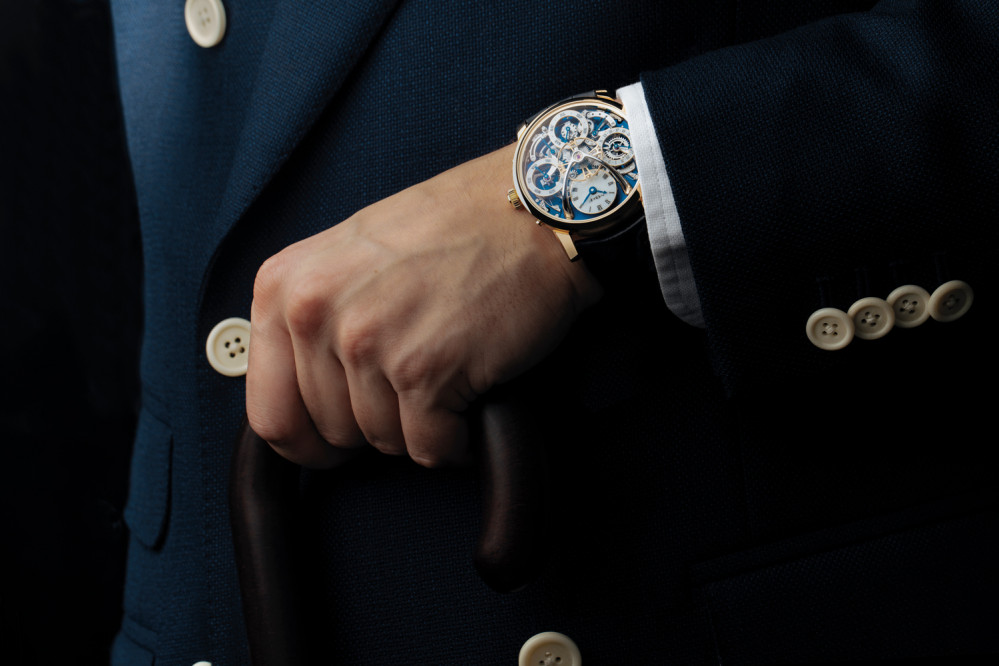 Opening up a new world of perpetual calendar aesthetics

Doing away with the calendar’s big lever has allowed for completely new aesthetics not possible when conventional systems are in use. MB&F’s mechanical processor enables the centre of the complication to be used, thereby saving space and allowing design freedom as the full dial is no longer necessary.

Legacy Machine Perpetual takes advantage of its fully integrated movement to place the perpetual calendar mechanism on top of the movement main plate so that it can be appreciated from above. Legibility is often an issue with perpetual calendars due to the sheer number of indications, and LM Perpetual addresses this by using skeletonised subdials (except for the time indication) that appear to float above the complication with no apparent support from below. 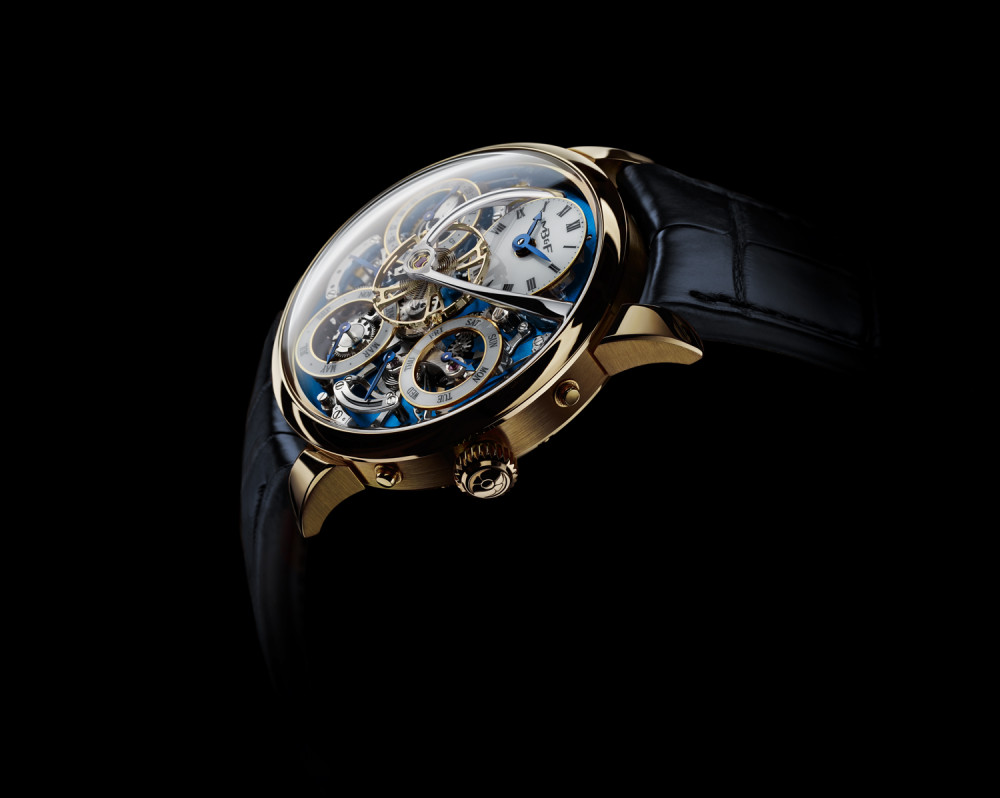 Balance above, escapement below

In yet another innovation, Legacy Machine Perpetual uses what is likely to be the world's longest balance wheel pinion to connect that elegantly suspended balance, hovering above the top of the movement, to the escapement on the back of the movement. Ensuring the practicality and reliability of this approach was essential before any other development work began.

While the view through the display back is animated by the escapement, it's the spectacular hand-finishing of the bridges and plates that really captivates the eye. 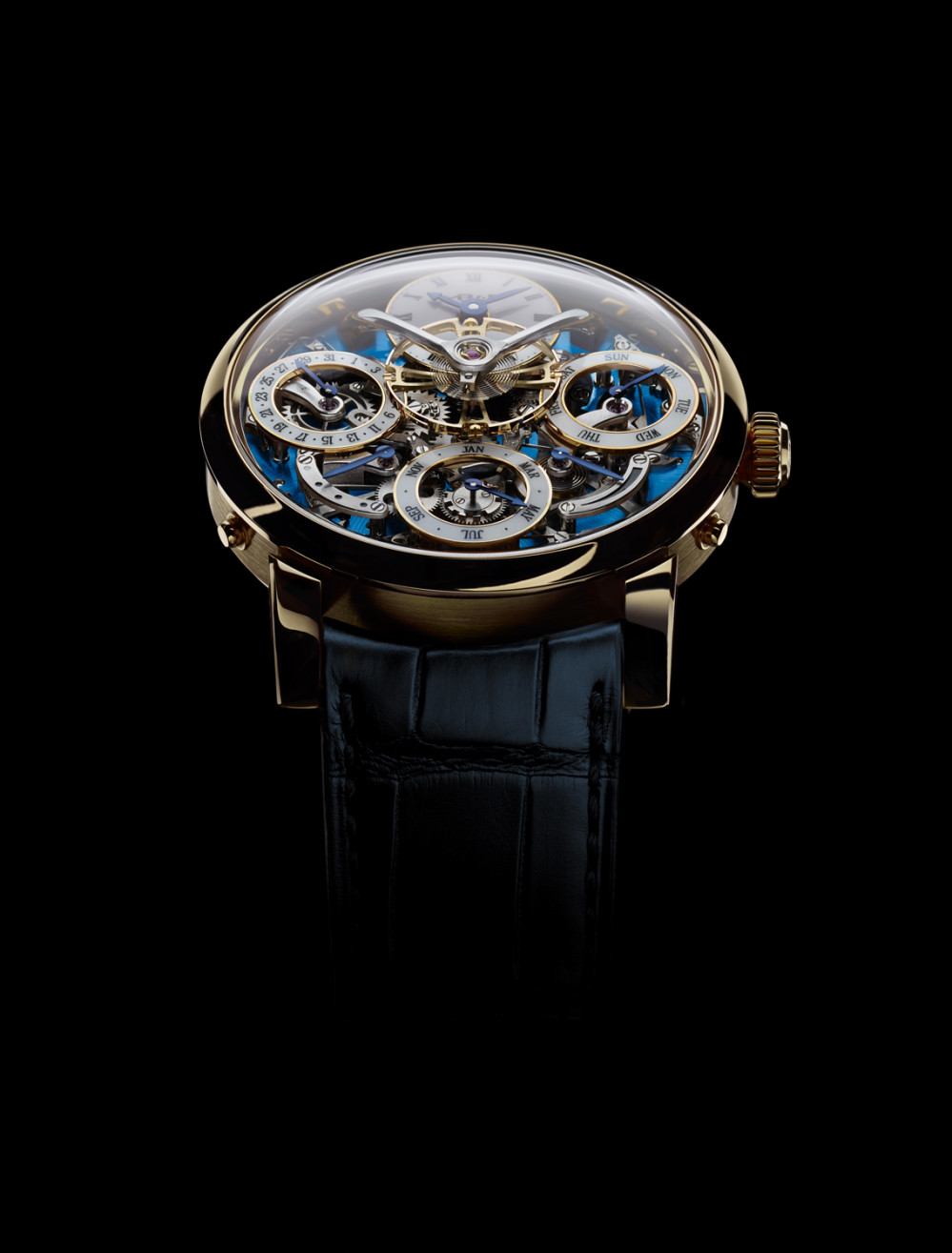