The New Tourbillon of Tourbillons by Antoine Preziuso

The latest creation by ANTOINE PREZIUSO GENÈVE features three tourbillons on a revolving plate that resonate like three hearts beating in unison. Producing this ‘mechanical ballet’ involved challenges of incredible complexity, notably the creation of a central planetary triple-differential. The result is a timepiece full of poetry: a vibrant homage to the ultimate watchmaking complication.

The Tourbillon of Tourbillons sees ANTOINE PREZIUSO GENÈVE write a new chapter in the long history of that most emblematic of watchmaking complications: the Tourbillon. The tourbillon already defied the laws of gravity – now it plays with the laws of resonance.

This technical tour de force is protected by three international patents and is made possible by a differential installed in the centre of movement. The central planetary triple-differential is blend of physical laws and mathematical formulae: the watch’s veritable ‘brain.’ It required years of effort, calculations and imagination, and is of such complexity that no computer programme has succeeded in accurately simulating its method of functioning. It even required the creation of the smallest ball-bearing in the world: scarcely 1.6mm in diameter!

The Tourbillon of Tourbillons is a dream Antoine Preziuso has nurtured since 2004. With the help of his son Florian, that dream has become reality – overcoming all the technical obstacles one by one. It involves total respect for the codes of Haute Horlogerie, and all the components of the Antoine Preziuso AFP-TTR-3X are finished and assembled by hand. The bridges are decorated with the Côtes de Genève motif, the plate and tourbillon bridges are in titanium, and the case’s support columns, horns and crown are made from 18-carat solid gold. 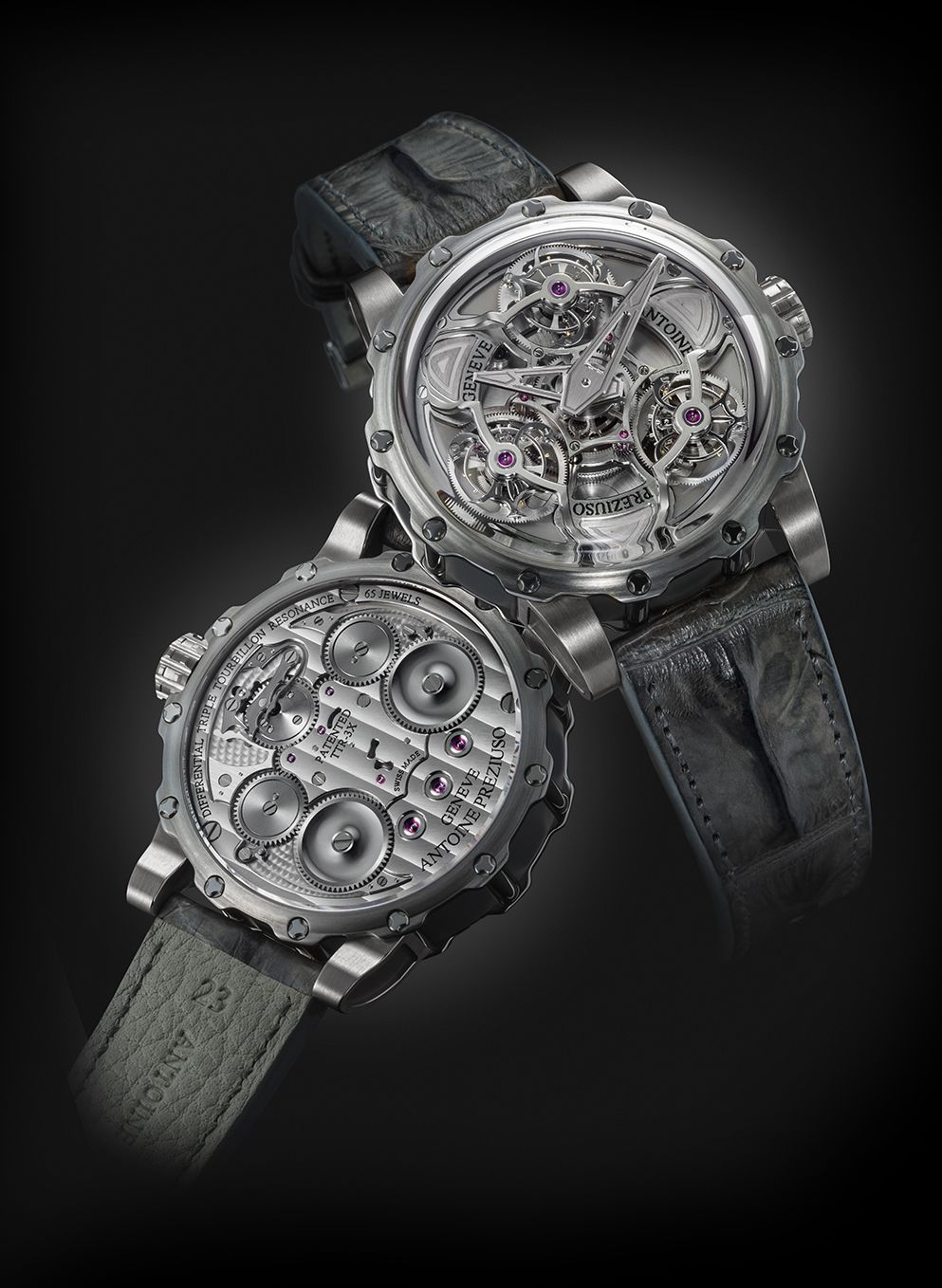 The Tourbillon of Tourbillons is imbued with the symbolism of the figure 3. It is powered by three tourbillons at a frequency of 3Hz, linked by a triple-differential and separated by three “masselottes” in finely engraved gold. The three tourbillons revolve on their axis every 60 seconds, while the plate completes six revolutions per hour. The sapphire glass on the back of the watch, with its Côtes de Genève patterning, shows three jewels at six o'clock, echoed by three smaller jewels at 12. The timepiece also evokes Past, Present and Future, while the complex architecture of its three-metal case exploits the three dimensions to the full. The Tourbillon of Tourbillons is full of explicit or hidden references to the figure 3 and its multiples – as befitting the measurement of Time on Earth, the third planet in the solar system!

Three international patents protect the Tourbillon of Tourbillons, reflecting the creativity and capacity for innovation of ANTOINE PREZIUSO GENÈVE, where the project was brought to fruition after a decade of research. Multiple Tourbillons on a Revolving Plate Associating three tourbillons on a revolving plate gives the timepiece unmatched regularity. Each tourbillon completes one rotation per minute, at a faster rhythm than the plate, which completes six rotations per hour (one rotation every ten minutes). The speed at which the tourbillons rotate is accelerated by this double revolution. They are placed equidistant from the centre of the plate, with their respective axes forming an equilateral triangle. Isochronism is enhanced by the fact that the three cages rotate on different axes and at variable speeds.

The closeness of the three independent regulating tourbillons – and their positions on the plate – enable them to resonate, and naturally adopt an identical frequency through a phenomenon known as “synchronism”. When the tourbillons start to resonate, their amplitude increases significantly – in a manner perceptible to the naked eye. The system as a whole thus forms a single revolutionary regulator, vibrating at a perfectly stable frequency of 3 Hz.

This differential is unique both in its conception and the variety of tasks it performs. It must distribute constant energy from the double-barrel to the three tourbillons through the centre of the watch, without affecting the axis of the hands; react if one the tourbillon stops working; and correct any variations in frequency. It contains the tiniest ball-bearing in the world, barely 1.6mm in diameter!

Rigid, robust yet light: the Power GTS case of the Tourbillon of Tourbillons pays tribute to the strong outlines of contemporary architecture, with an harmonious blend of titanium, steel and 18-carat gold that offers the wearer all the comfort of fully bio-compatible materials. It derives from the Power case originally designed by ANTOINE PREZIUSO GENÈVE in 2011, with the same eight support columns and removable horns in 18-carat gold. 24 ANTOINE PREZIUSO GENÈVE Power screws enclose the upper and lower bezels to ensure that this complex case – formed by 45 components tooled in the block – is fully waterproof. The case’s dimensions – 45mm in diameter and 14mm thick – make it an audacious choice for a watch conceived in line with the traditional codes of Haute Horlogerie. The contrast is fully deliberate and reflects the determination of Antoine and Florian Preziuso to strike a path of their own. 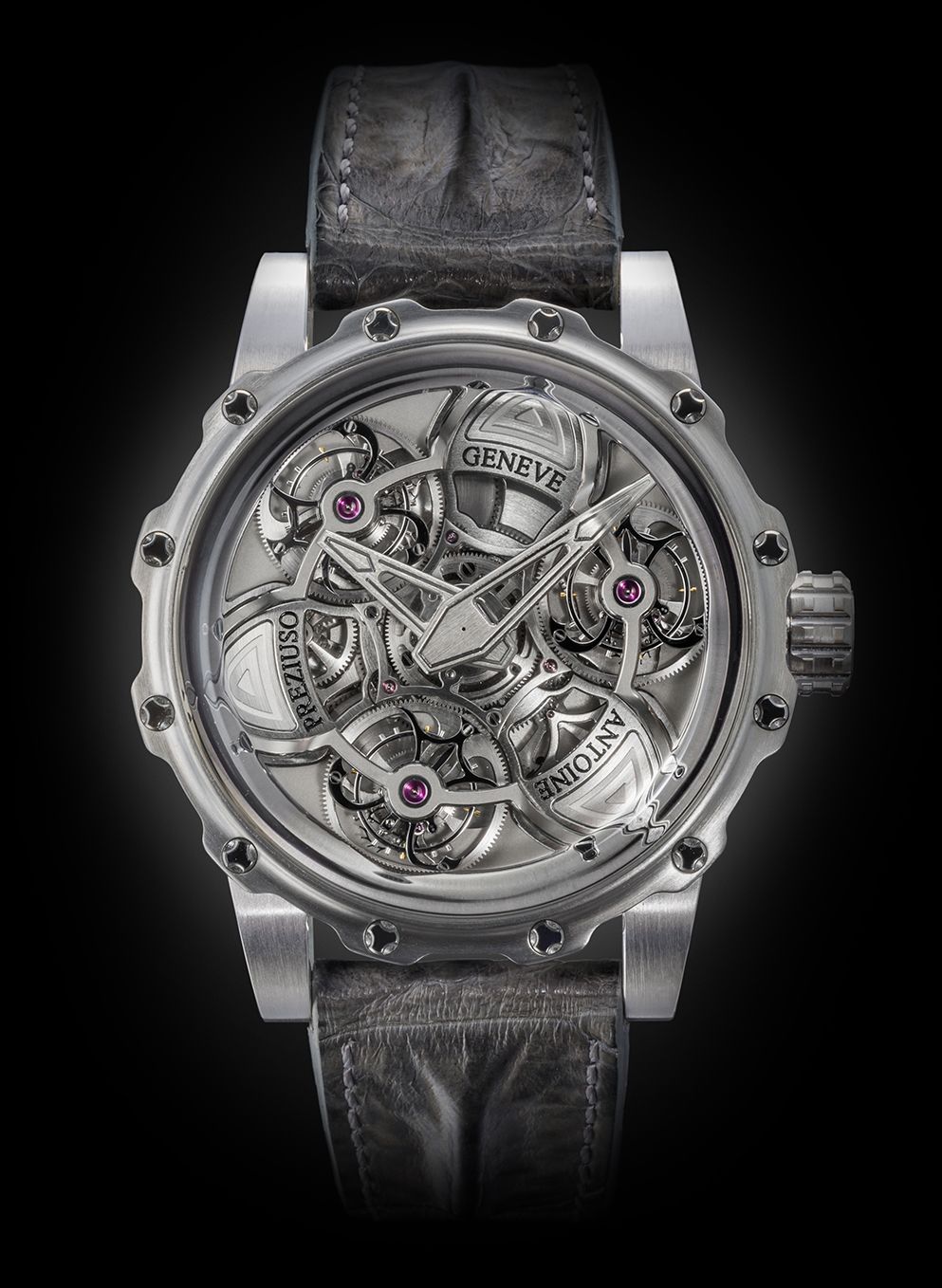 Antoine Preziuso Tourbillon of Tourbillons - To The Power of Three