Renowned for its mastery of the horological grand complications, Vacheron Constantin has also distinguished itself in the field of chronometry and precision instruments. This expertise has made the Maison’s timepieces – and particularly its chronographs – firm favourites among scientists, explorers and athletes alike. In 1977, Vacheron Constantin celebrated its 222nd anniversary with a new watch that would firmly establish presence in the world of sports watches: the "222", whose sleek elegance inspired the Overseas collection. The exhibition offers a reflection of this epic saga.

Sports watches are both instrument featuring impeccable precision timekeeping and models capable of withstanding the challenges of an active lifestyle. For Vacheron Constantin, this duality has always been expressed through timepieces in which technical imperatives are matched by superbly elegant aesthetics. Known from the time of its founding for its mastery of the most sophisticated watchmaking complications, the Maison distinguished itself at an early stage by developing timepieces perfectly suited to the requirements of scientists and explorers. These pocket watches, produced from the 1850s to the beginning of the 20th century, were greatly appreciated for their reliability and precision. Honoured by numerous prizes awarded in chronometry competitions, they were naturally of interest to various military corps as accurate and extremely robust time-measuring instruments.

The advent of the wristwatch at the beginning of the 20th century enabled Vacheron Constantin to demonstrate its technical know-how in the production of chronographs, which were to become benchmarks in sporting circles. Over the decades, these timepieces dedicated to short-time measurements have consistently proved capable of adapting to the demands of contemporary life – in which sport and travel occupy an ever-growing place – while losing nothing of their inherent elegance. Witness the Turnograph Reference 6782 model from the 1950s, which is widely regarded as the first sports watch from a prestigious watchmaker.

From the 1970s onwards, watchmaking underwent a phase of profound transformation, not only due to the new quartz movements, but also in response to customers’ aspirations towards a more audacious and almost irreverent approach to watchmaking in this decade of emancipation. Sturdy watches, crafted in stainless steel with an integrated bracelet and highly legible dial, created a whole new segment of sporty chic products corresponding to the lifestyles of this era. In 1977, the year of its 222nd anniversary, Vacheron Constantin presented its own interpretation of this new trend: the "222” watch born from the imagination of the youthful designer Jörg Hysek. Classic in its terms of its “motorisation” – since it was equipped with an ultra-thin self-winding movement – it nonetheless broke all the rules with its slender yet robust silhouette, enhanced by a finely notched bezel and integrated bracelet. Considered the first emblematic sports model from the Maison, the 222 subsequently inspired another watch destined for greatness. In 1996, Overseas came to embody the Manufacture’s take on the world of sports. This line dedicated to travel and discovery embodies the pioneering spirit of Vacheron Constantin.

To illustrate this tradition of precision watches and sports models produced by Vacheron Constantin since the 1940s, the Maison has drawn on its rich heritage of some 1,300 timepieces to select those particularly representative of different periods and trends. These watches exhibited in Tokyo and Osaka testify to technical expertise serving the cause of elegance. 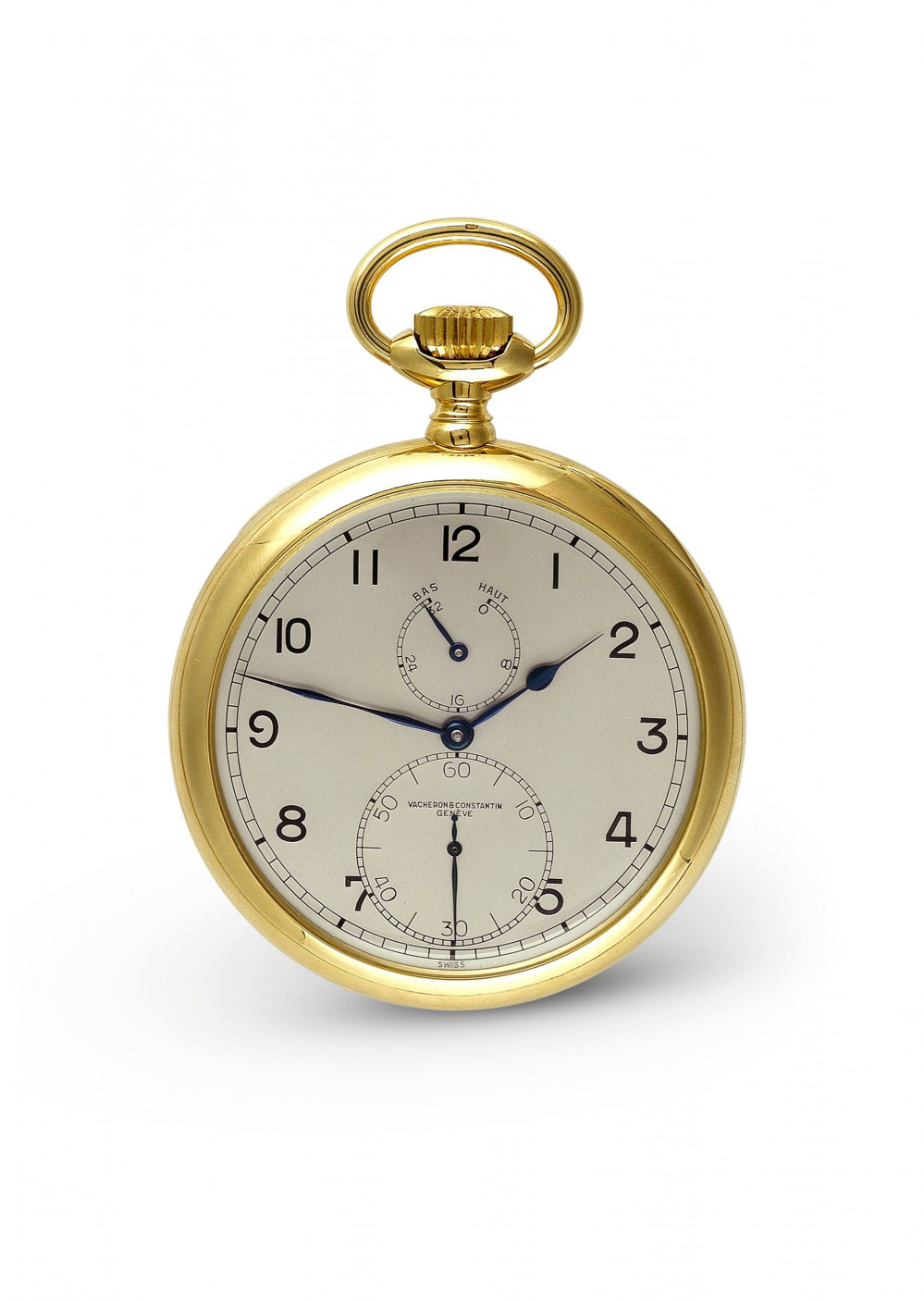 The development of timepieces for professionals combining precision and technical sophistication reflects the pioneering spirit of Vacheron Constantin. In order to meet the requirements of scientists, explorers, sportsmen and astronomical observatories, the Maison has been offering reliable and accurate pocket watches since the 19th century, earning it numerous distinctions in chronometry competitions. This 1947 manual-winding gold model with small seconds and power-reserve indication is a perfect illustration of this know-how. 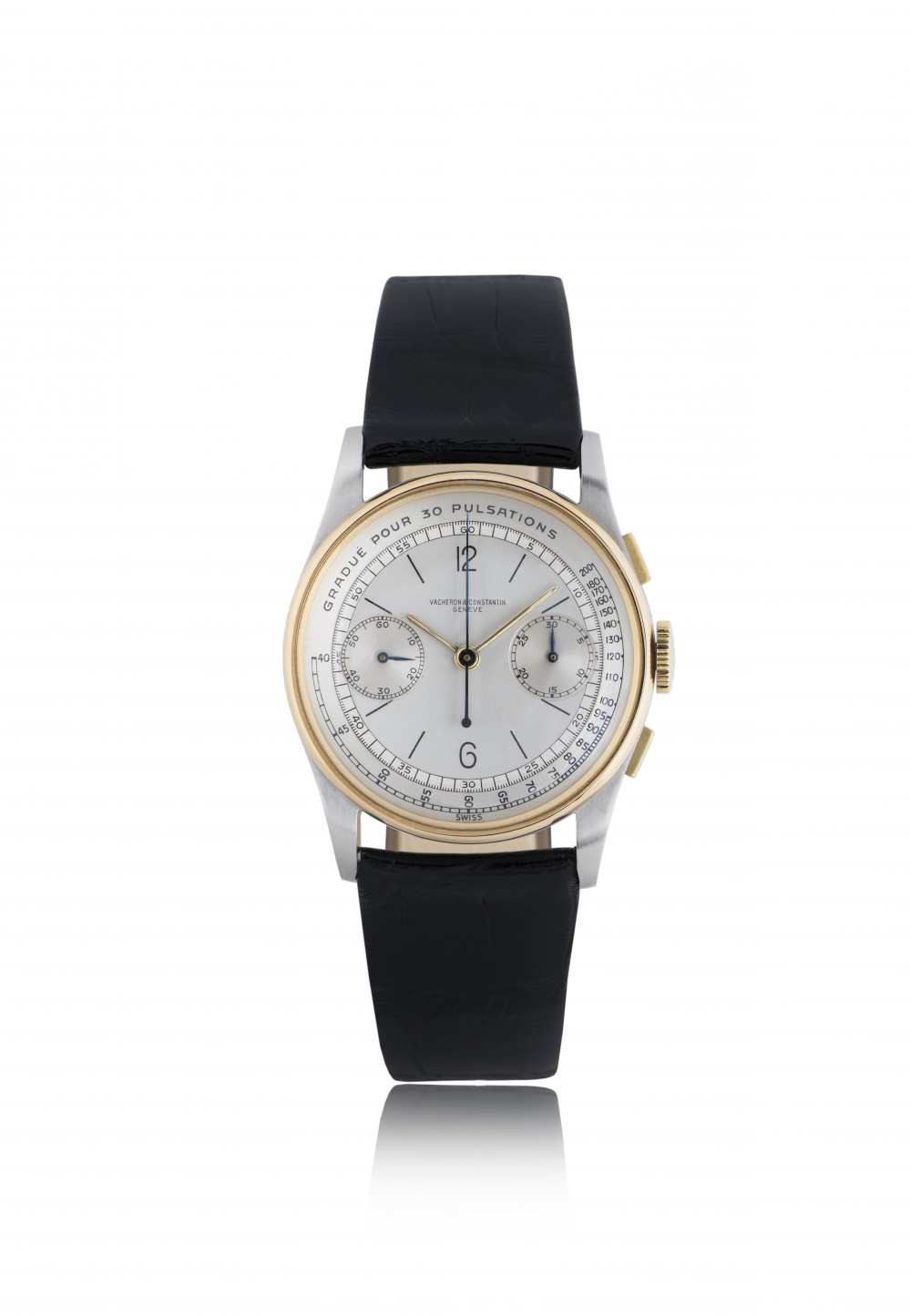 Thanks to the miniaturisation of movements at the beginning of the 20th century, chronographs became wristworn instruments. For Vacheron Constantin, this was an opportunity to demonstrate its technical mastery through the development of high-performance calibres that were unanimously acclaimed within the sporting and scientific communities. Among the brand's especially acclaimed chronographs, Reference 4072 was to enjoy a remarkable longevity. Initially launched during the 1930s in a single-pusher version, it wound up its career in the early 1970s with two pushers, as exemplified in this two-tone model from 1944. 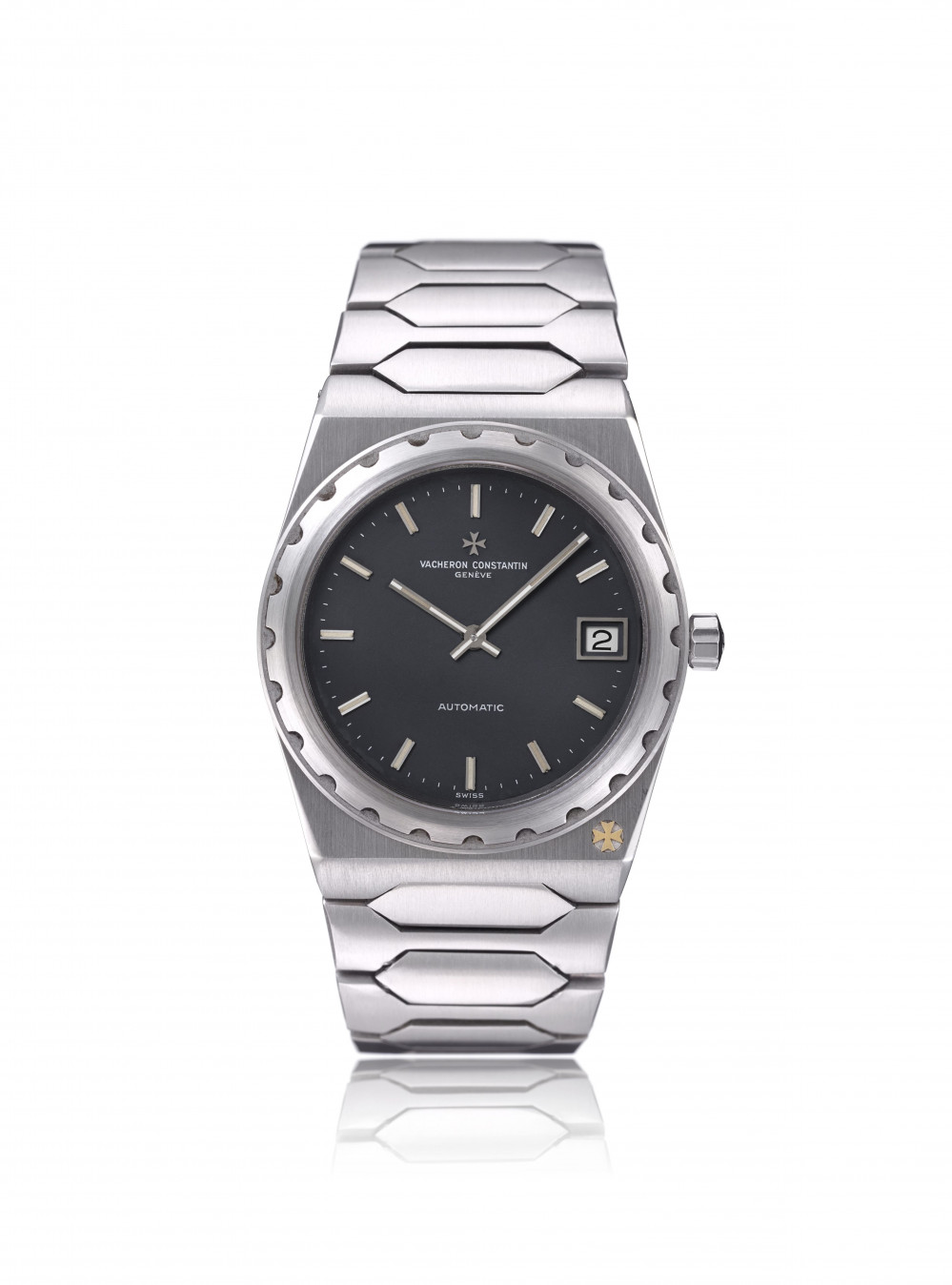 To celebrate its 222nd anniversary in 1977, Vacheron Constantin presented the "222", a steel timepiece with an integrated bracelet, featuring an edgy profile and meticulous attention to detail, including the Maltese cross stamped on the caseband. Powered by ultra-thin manual-winding Calibre 1121, the watch was graced with a pure and elegant profile created by youthful designer Jörg Hysek. Produced until 1985 in various sizes and –- including this original 37 mm steel "Jumbo" version –this model is regarded as the first iconic sports watch from Vacheron Constantin. 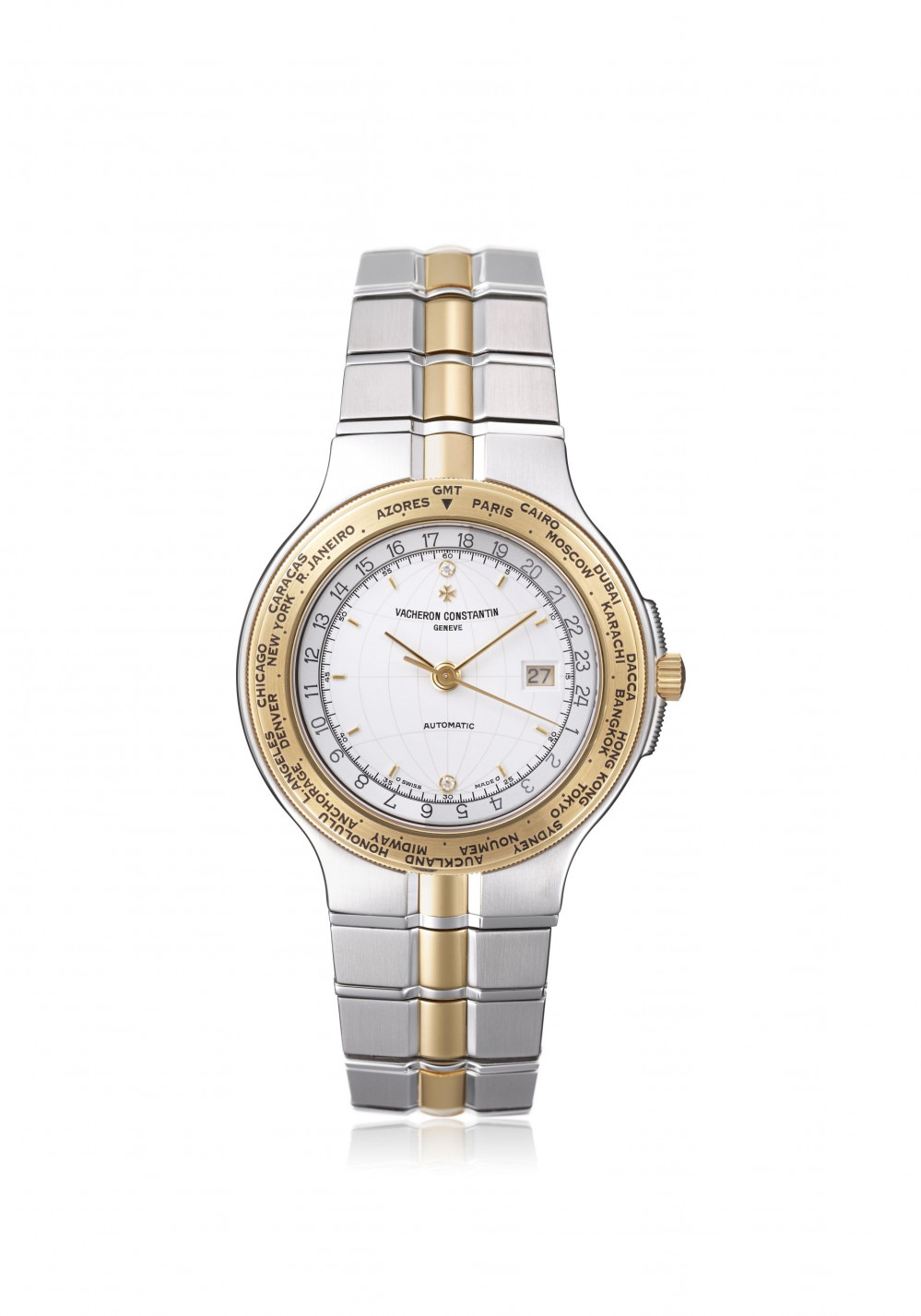 At the end of the 1980s, four years after the "222" was discontinued, Vacheron Constantin decided to return to the segment of sporty and elegant watches with "Phidias", a model designed by Dino Modolo. Very much in keeping with the style of that decade, this watch with its integrated two-tone curving bracelet has a profile that is more elegant than sporty. Nevertheless, the "Phidias" collection was thoughtfully built so as to integrate various complications, such as the world time function appearing on this model via the rotating bezel engraved with cities representing the different time zones. A timepiece entirely in tune with the prevailing democratisation of air travel. 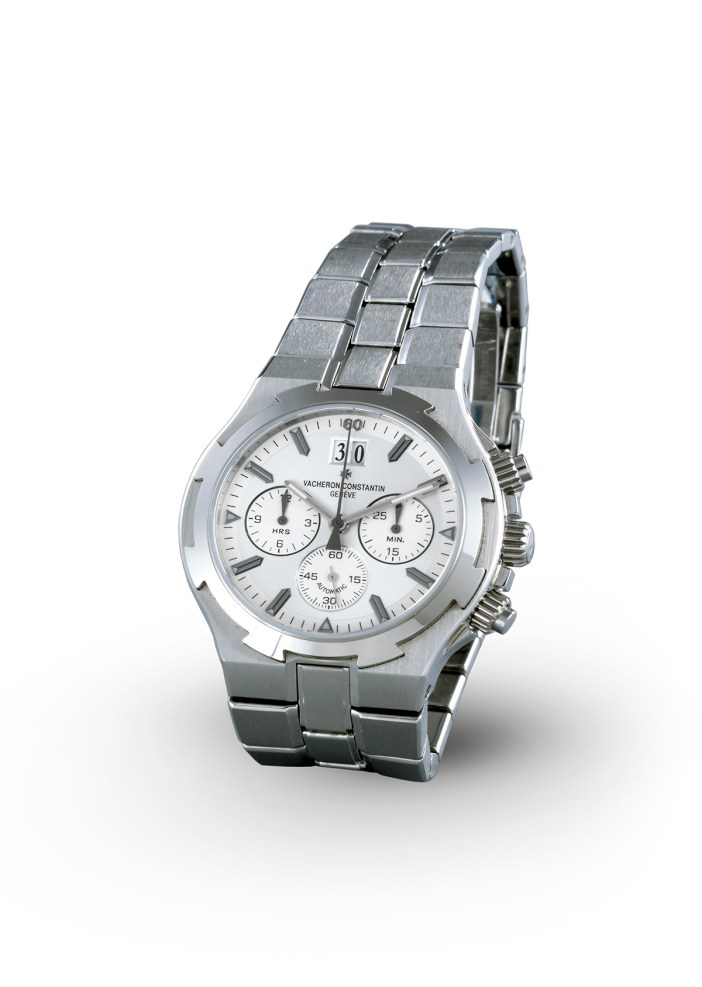 The Overseas watch, also designed by Dino Modolo, is a direct descendant of the "222". In this respect, 1996 – when the model was presented – was a pivotal year for Vacheron Constantin, which thereby asserted its presence in the world of sporty and elegant watches. The year proved all the more important in that this watch – marking the start of a brand-new collection – enjoyed immediate success. Inspired by the notion of travel, the Overseas was first presented in three sizes with self-winding calibres, before appearing in various interpretations, including this stainless steel chronograph model epitomising its immediately recognisable blend of sport, elegance and classicism. 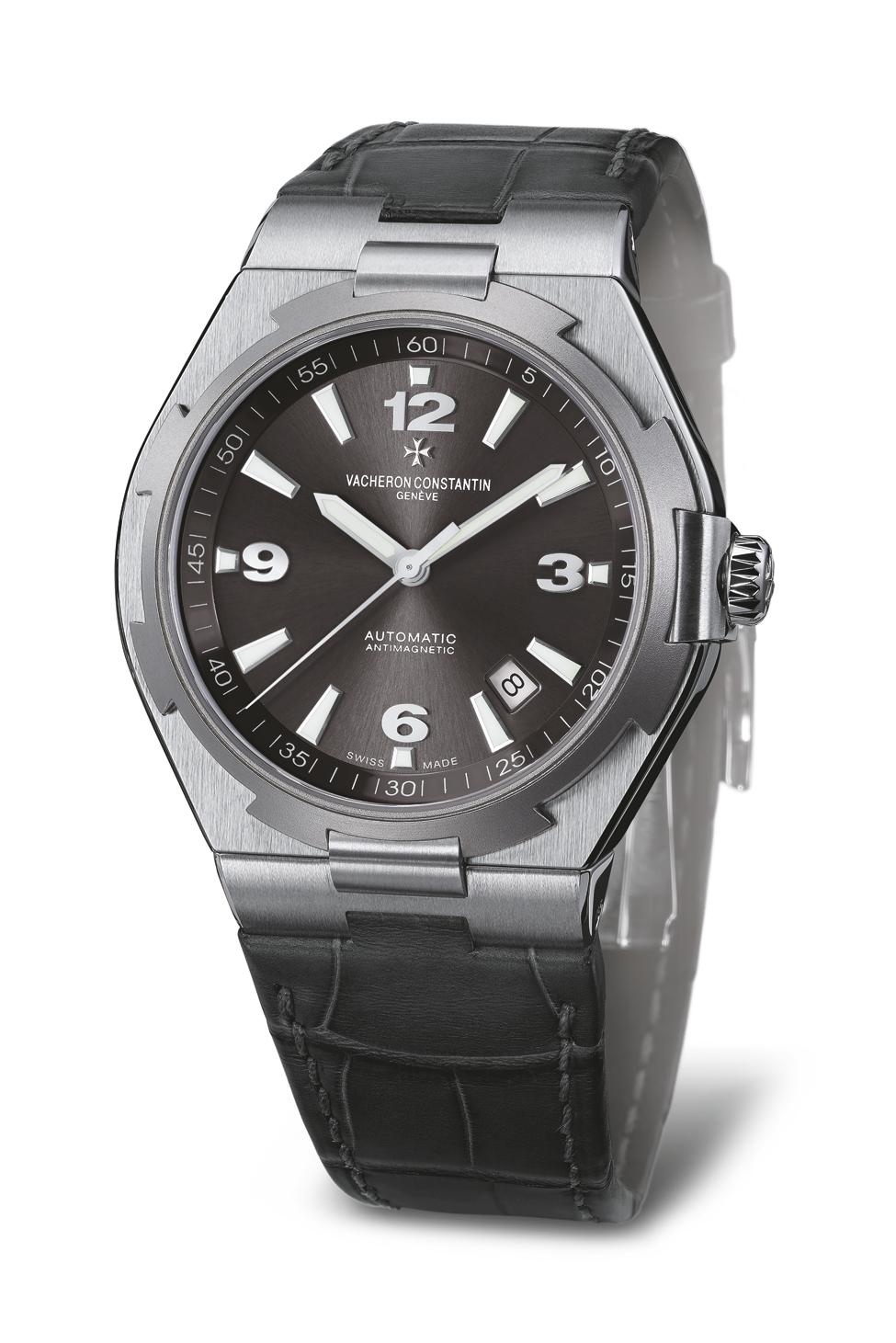 The success of the first Overseas watches is confirmed by their longevity and the second generation of the model was indeed only introduced in 2004. On this occasion, its design underwent a notable evolution in order to make the watch sportier and more daring, particularly in terms of the integrated bracelet whose links are inspired by the Maltese cross, the emblem of Vacheron Constantin. The size was also adapted to the standards of the 2000s, with the new Overseas watch adopting a 42 mm diameter, both for the chronograph and for the simple model presented here in a 2010 stainless steel and titanium version. 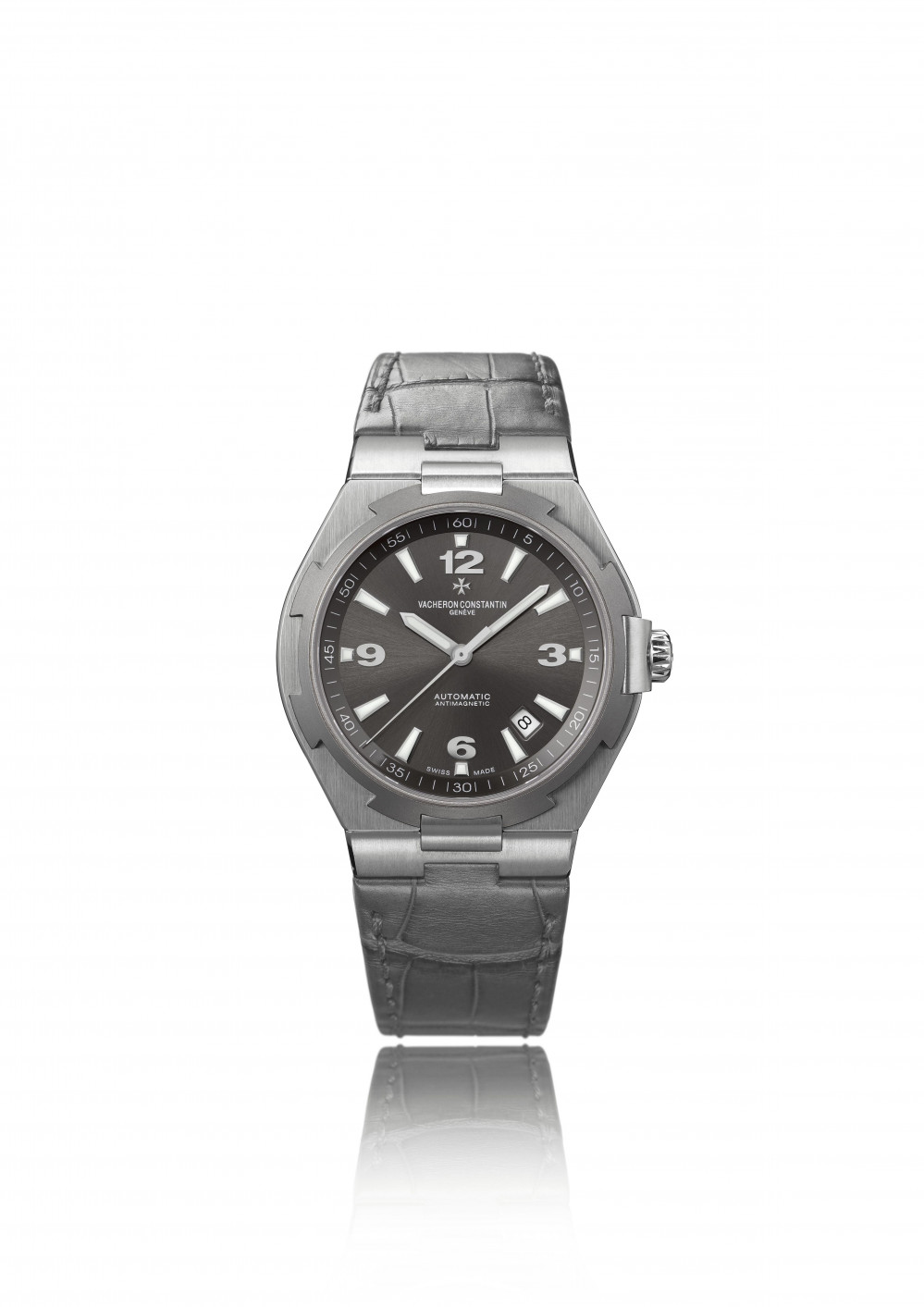