Dedicated to the Apollo 8 space mission, the first to orbit around the moon, the new Speedmaster Dark Side of the Moon Apollo 8 presented by Omega at Baselworld 2018 is like no other model in this line. In fact, it features a decorated version of Omega's famous Moonwatch movement which is visible from both sides thanks to a skeletonised dial. And like the moon, each side is different. The dial-side is a light shade to represent our view of the moon’s surface from Earth, while the back of the watch delves into the dark side that only astronauts get to see. 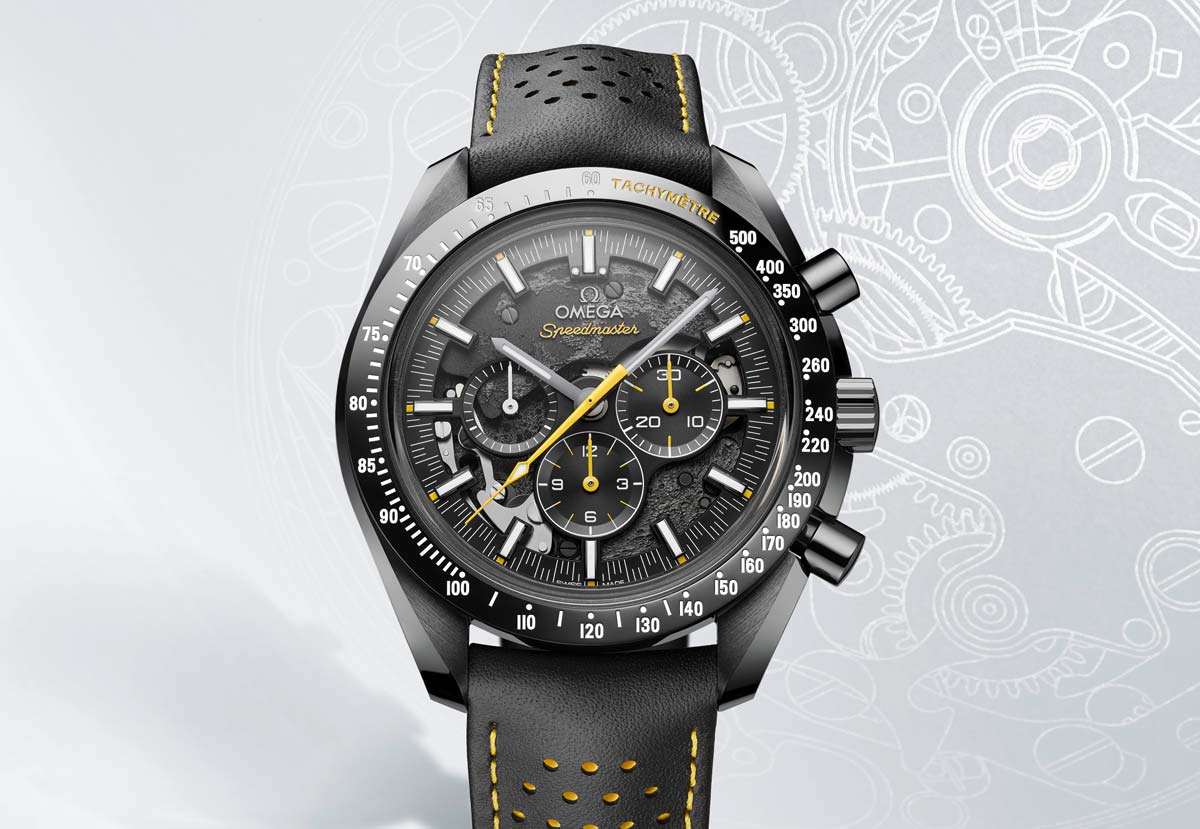 A laser ablation technique producing a realistic imagery of the lunar surface was used to decorate the bridges and main plate of the blackened movement. 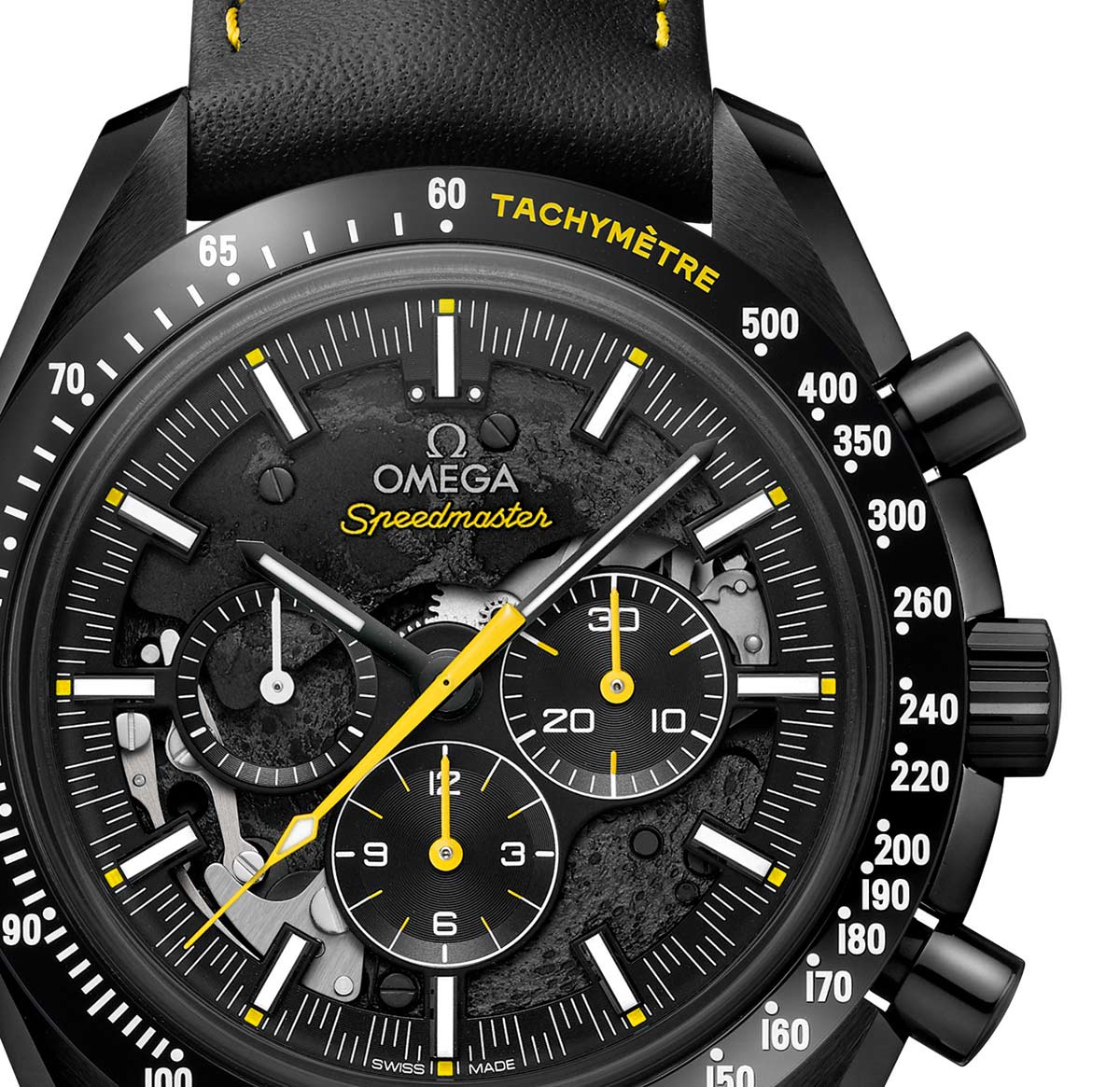 The 44.25 mm x 13.80 mm case is entirely made of black zirconium oxide ceramic. The black dominating the watch is contrasted by yellow, a colour which is often associated to speed. 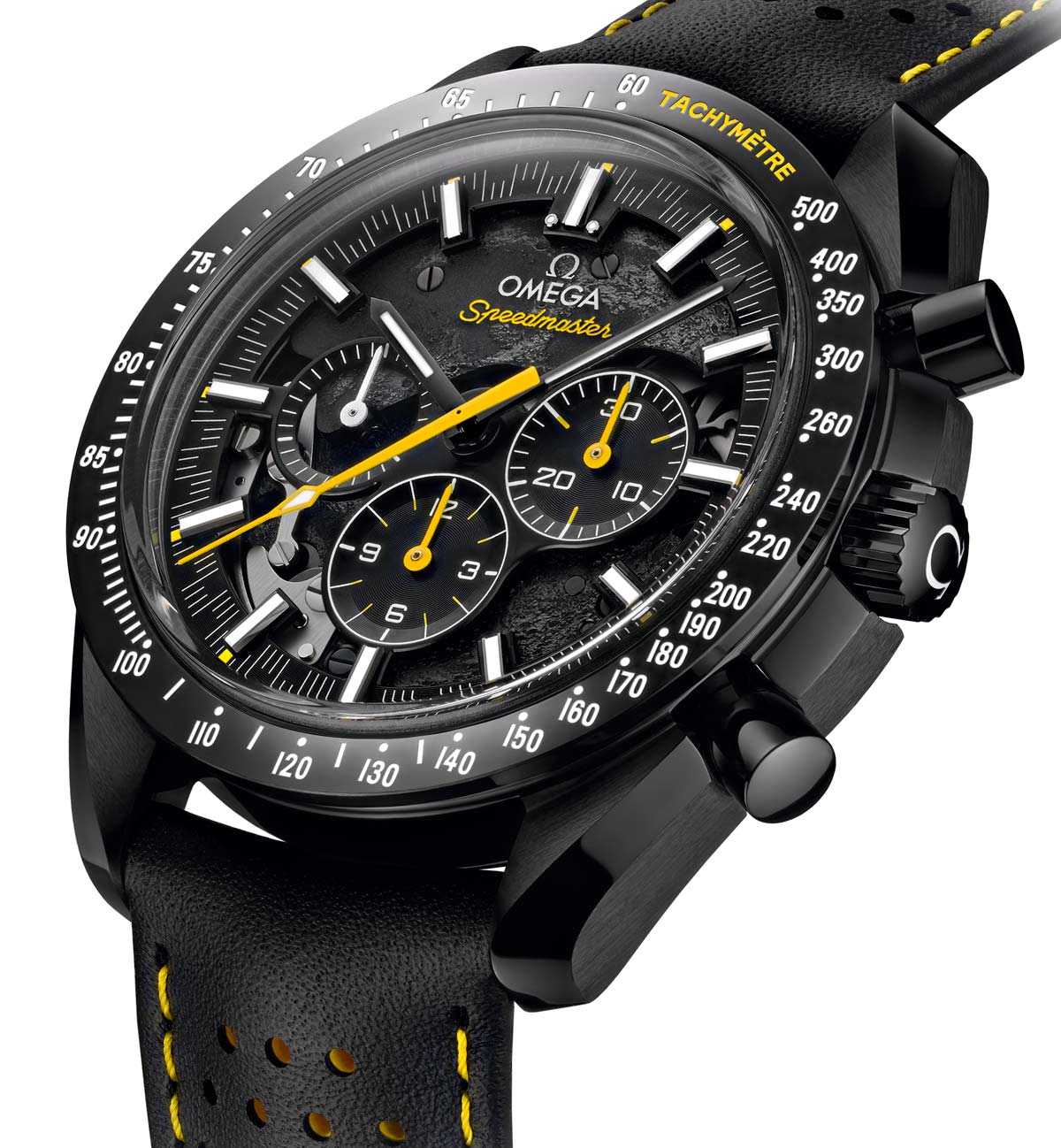 The chronograph hands are varnished yellow, while the tachymeter scale and crown are filled with Super-LumiNova. The black and yellow theme extends to the leather strap, which contains a section of yellow rubber through the middle. A milling tool has then been used to create micro perforations through the constructed strap to reveal the yellow rubber inside. 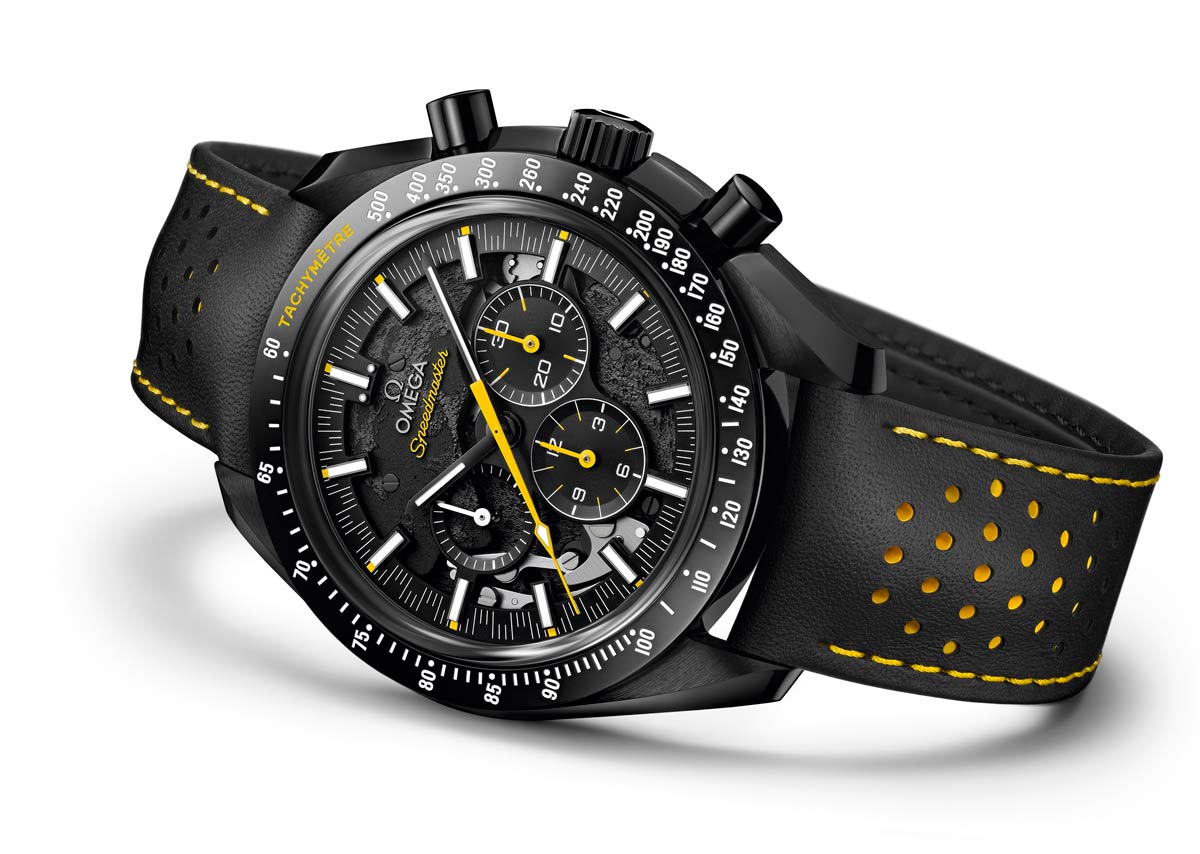 On the caseback we find the engraving "WE'LL SEE YOU ON THE OTHER SIDE”, the words spoken by Command Module Pilot Jim Lovell on board the Apollo 8 mission at the start of the crew's pioneering orbit to the dark side of the moon which was never seen before by human eyes. Seconds before the spacecraft disappeared beyond the range of radio contact, Lovell spoke these final assuring words to ground control. 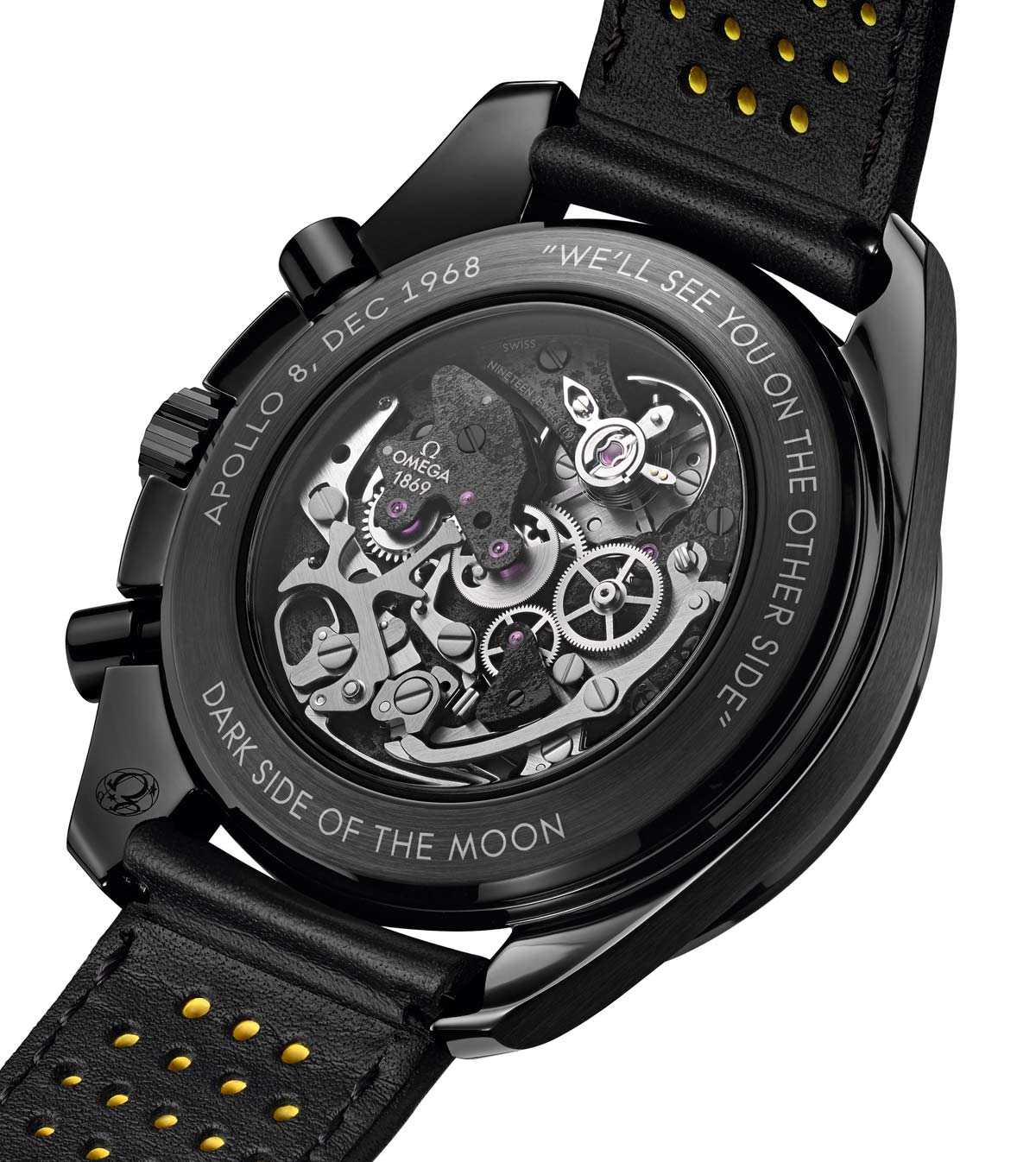 The blackened and decorated version of the Calibre 1861 - called 1869 as a tribute to the first moon landing - is a feast for the eyes of any mechanical watch enthusiast. Beating at 21,600 vibrations per hour, this hand-wound movement offers a power reserve of 48 hours. 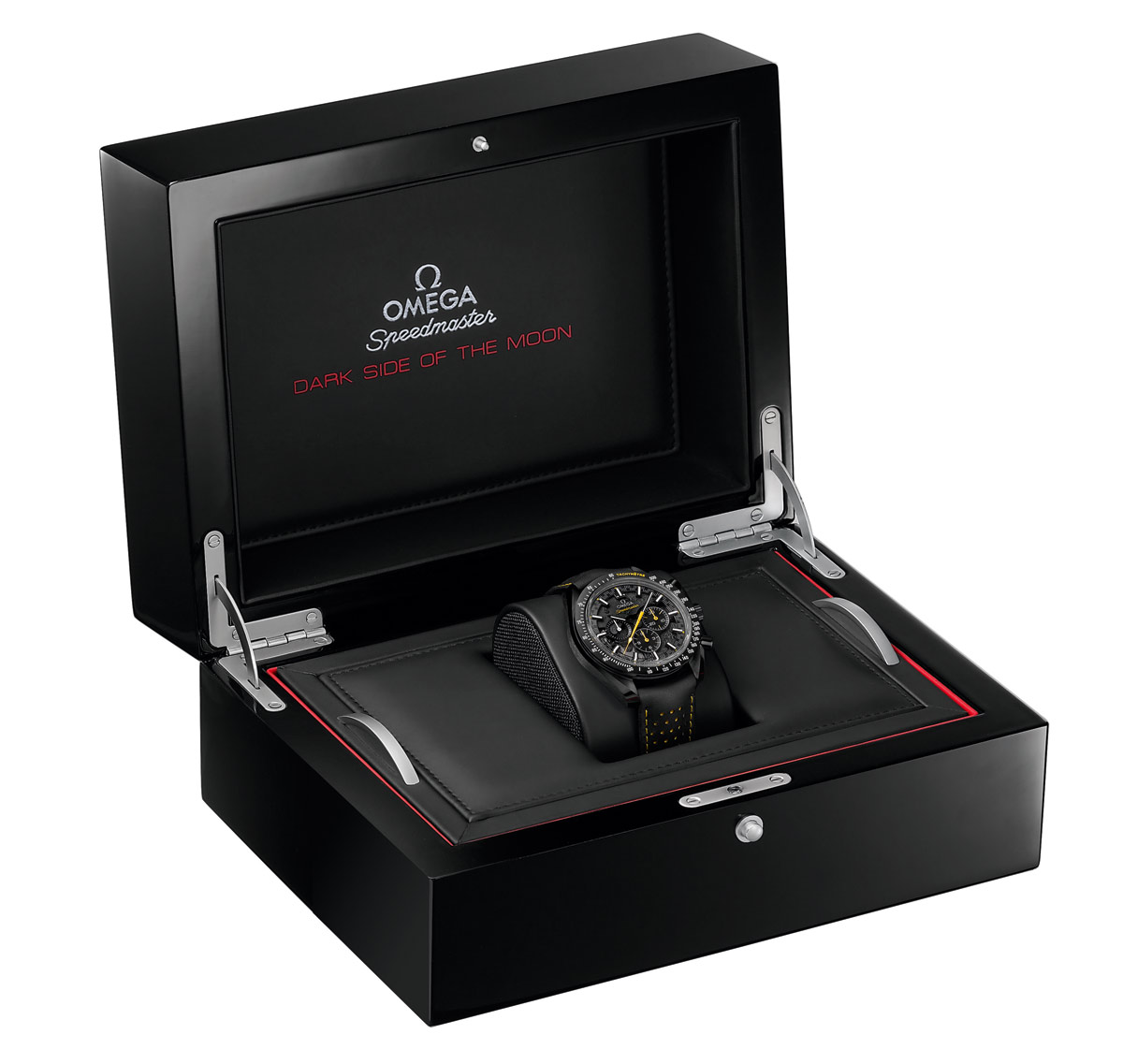 Water resistant up to 5 bar (50 metres / 165 feet), the new Omega Speedmaster Dark Side of the Moon Apollo 8 comes with a special presentation box and is priced at Euro 8,900. omegawatches.com